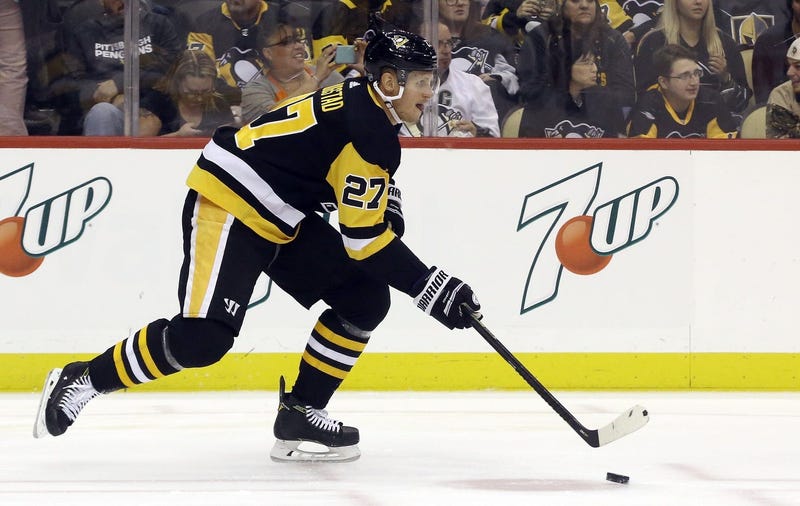 Pittsburgh (93.7 The Fan) - With the NHL trade deadline three weeks away, thoughts in Pittsburgh will remain focused on how Jim Rutherford adds a top-6 scorer to his lineup as he prepares the Penguins to enter the playoffs without Jake Guentzel.

But that deal, and the return or possible trade of Nick Bjugstad, will also have a lot to say about what the fourth line looks like going into the playoffs.

There can be no question about the fact Mike Sullivan needs more from that group – no matter how it’s composed.

Today in Washington, that line shapes up as Andrew Agozzino centering Alex Galchenyuk and Sam Lafferty.

The Capitals’ fourth line is Nic Dowd between Brendan Leipsic and Garnet Hathaway, a line with a bit more size, more collective points and definitely more of a physical presence – all three of those players are among the top 10 in hits for the Capitals this season.

Pittsburgh’s fourth line, which included Anthony Angello instead of Lafferty, barely played against the Flyers Friday night; none of them reached 5:00 in ice time.

Obviously, that’s not going to work come the playoffs.

Lafferty has struggled with decisions in his own end in recent weeks, not unusual for a rookie, but he has also struggled to get pucks to the net and contribute offensively – not any easier with limited ice time.

Agozzino has been better than Joseph Blandisi in the faceoff circle but has been a virtual no-show offensively; and of course Galchenyuk is not a fourth-liner, but there’s nowhere else to put him other than the press box.

The Penguins’ fourth line has no identity and, in part because of the team’s injuries, that’s no surprise given that it has featured about a dozen different players this season.

Lafferty has spent time at all three positions on that line, and defenseman Juuso Riikola has also played there on the right wing.

Patrick Hornqvist, Dominik Simon and Dominik Kahun have all seen time there as well, along with Adam Johnson, Thomas Di Pauli and Stefan Noesen.

Since Sullivan is going to keep together Zach Aston-Reese, Teddy Blueger and Brandon Tanev, what do the Penguins want from the fourth line?

Bjugstad would be an expensive fourth-line center at $4.1 million, if he’s here past the trade deadline.

Galchenyuk might also be gone by then, and there will be a trickle-down effect with any new top-6 addition.

And remember that with the third line staying put, anyone not playing in a top-6 role is headed for the fourth line.

Will that line simply be expected to pitch in more offensively while not being a defensive liability?

After all, in this NHL the fourth line is expected to do more than just hit people; see the Caps’ fourth line, as all of them are pacing to push for 20 points this season.

Will Rutherford add another player before the deadline who could join with Bjugstad to give that line more size?

Could he deal Bjugstad and add another player who could join Lafferty and give the fourth line more speed and ask it to use that speed to push the pace of games?

There are lots of possibilities, but this much is certain: the Penguins aren’t getting enough from their fourth line and haven’t for some time now. Making a long playoff run will demand that group to have more influence on games.