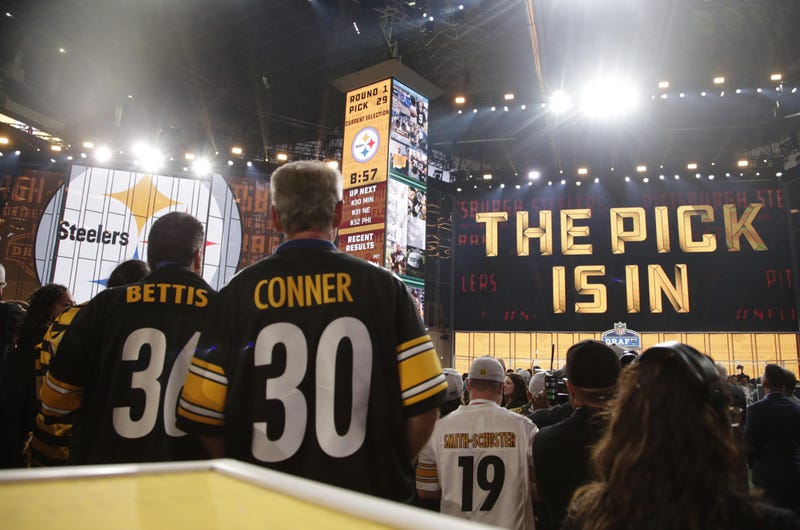 PITTSBURGH (93.7 The Fan) – While the Steelers exact needs will be made clearer by players who may retire, free agents who aren’t signed and potentially a trade or two. Here is a look at some of the early January predictions for the Steelers first round pick at number 24 of the NFL Draft.

-Known for being physical and athletic and could step in at left tackle his rookie season.  Coming out after his junior season, Darrisaw has started since his freshman year with the Hokies.

-Another player who could fit into the left tackle spot as a rookie.  Eichenberg has been a star since college, going to the Irish as the seventh best tackle in the nation as a high school senior.  He helped Notre Dame rush for 211 yards a game.

-An elite left tackle for three years in college, Slater opted out of this past season due to the pandemic.  Another aggressive offensive lineman, Slater could settle in as a right tackle in the NFL.  Described as a “mean and nasty run blocker”.  Steelers may already have that in Zach Banner.

-Part of an incredible run by Clemson football over the last few years.  Has about everything you would want from a running back, except size.  Steelers often searched for ‘chunk plays’, Etienne could be that guy after averaging 7.2 yards a carry with 70 touchdowns.  He amassed over 6,000 total yards including 1155 on 102 career receptions.  One concern, he only had one 100-yard game in his six playoff appearances.

-His size immediately compares to Ben Roethlisberger, so does his athleticism.  Trask has a strong, accurate arm as he became a starter in his senior season.  Known for spreading the ball around, another Roethlisberger trait, Trask threw for 4,283 yards, completing 68.9% of his passes with 43 touchdowns and 8 interceptions.  He would likely be the sixth quarterback taken, a first round risk with other needs.  Miami took a first round risk in 1983, drafting the sixth quarterback in the first round.  It worked out for Dan Marino.

We will continue to update mock drafts as information changes.