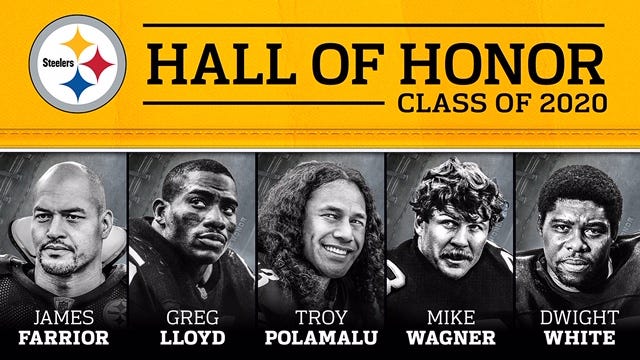 PITTSBURGH (93.7 The Fan) On Friday night, The Pittsburgh Steelers have announced their 2020 Hall of Honor inductees.

All five members of the 2020 class played on the defensive side of the ball for the Steelers, and have a combined 12 Super Bowl championships.

Polamalu played his entire career with the Steelers, spanning from 2003 to 2014 where he would win two Super Bowls and make eight Pro Bowl games.

At 5-foot-10 Polamalu became one of the most feared safeties in the game; with his athletic ability and quickness, he was able to be anywhere on the field at any given point.

Polamalu was also a 2020 inductee into the Pro Football Hall of Fame.

Farrior was drafted eighth overall in 1997 by the New York Jets, then joined the Steelers before the 2002 season.

Another two-time Super Bowl Champion, Farrior also found his way to two Pro Bowls and collected 35.5 sacks in his career.

Wagner was a safety for the Steelers during their four Super Bowl victories in the 1970’s, despite being hurt for most of the 1979 season.

A two-time Pro Bowler, Wagner played his entire career in Pittsburgh, appearing in 119 games over 10 seasons.

Yet, another two-time Pro Bowler who played his whole career with the Steelers, White passed away in 2008 from complications following a back surgery.

With White’s induction, Ernie Holmes is the only member of the Steel Curtain not inducted into the Steelers Hall of Honor.

Lloyd the final member inducted in the 2020 Steelers Hall of Honor, is the only member in the class to not win a Super Bowl, but did appear in the loss to the Dallas Cowboys in Super Bowl 30.

Drafted 150th overall in 1987, Lloyd played 10 seasons with the Steelers and went to five Pro Bowls.

An official date to formerly induct the new members has yet to be set due to the COVID-19 pandemic.