The NHL’s East Division – I’m sorry, the MassMutual East Division - is not only living up to its pre-season label as the league’s most competitive but, almost a third of the way through the season, the expected teams are battling it out.

Going into Monday, Boston leads with 24 points then bunched behind are Washington at 21 points, with Philadelphia, Pittsburgh and NY Islanders – at 19. So, as predicted, those five teams are going for four playoff spots and one is going to get left out.

Not so long ago, it was looking like the Penguins would be that team. But all of a sudden, after two straight wins over the Islanders (in regulation no less), the Pens have won 4 of their last 5 games and appear to have found their footing.

A few reasons for optimism were on display in Saturday’s 3-2 win over the Islanders.

A Pittsburgh goalie hadn’t actually stolen a game until Tristan Jarry did just that. Jarry had to make two point-blank saves after defensive breakdowns in the opening minutes and had to come up big as his teammates were outshot, 16-4, for the period and 35-18 for the game.

Jarry was solid through screens, stopped Islanders standout Matthew Barzal point-blank in the third period and withstood an Islanders power play then an extra attacker for 3-and-a-half of the game’s final 6 minutes.
“Tristan won us that game hands down,” declared defenseman Mike Matheson (back to him in a moment).

After compiling a save percentage over his first seven starts so disgusting that decorum prohibits us from listing it here, Jarry has put up a .936 in his last four games, .955 in the last two. Maybe a small sample size but Jarry now is looking more like the All-Star he was last season. 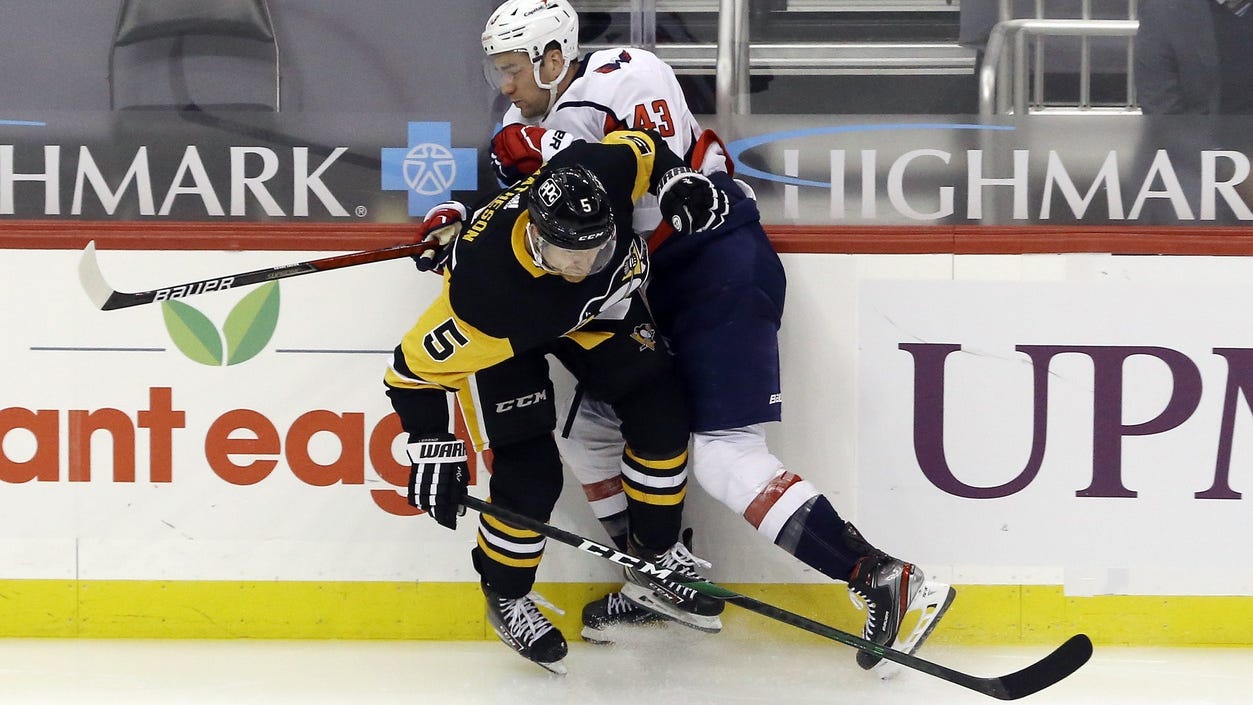 Then, in each of the last two games, Matheson has made plays out of his own end that resulted in goals. Thursday, he went goal line to goal line which set the stage for a Malkin-to-Rust-to-Zucker goal to make it 3-0.
Saturday, Matheson’s instinctive burst was the only real scoring chance the Penguins had in the first period then in the third period he scored the tying goal after another end-to-end rush on a give-and-go from Teddy Blueger.

Plus, I’m not sure that Matheson and John Marino can be called the Pens top defensive pair, but they have started to log more even-strength ice time than Kris Letang’s pair.

Speaking of Letang, he finally scored a couple of goals, both from the top of the circle. The first was a one-timer 12 seconds into a power play. He was more patient on the game-winner but looking shot all the way before snapping the puck through a Jake Guentzel screen. The Penguins are better when Letang is shooting and not forcing passes that aren’t there.

They only had to kill one penalty but it came with just under 6 minutes left in the third period with the Penguins nursing a 1-goal lead. Jarry made a nice kick save on the Islanders only real scoring chance during that power play.

Goaltending and special teams, along with injuries, had been the team’s biggest problems the first four weeks of the season. This recent stretch doesn’t mean the Penguins have definitely turned it around but, as I said, it appears they have found their footing.

Of course, that footing is more like a toehold since all it would take is a loss or two this week in Washington to make the Penguins once again looking like the odd team out. But, as another coach in this town might say, right now the arrow is pointing up.