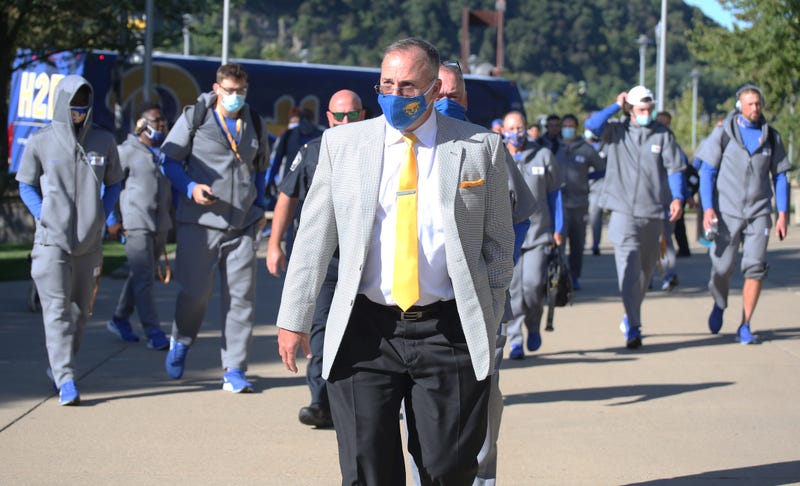 PITTSBURGH (93.7 The Fan) – All week Pitt head coach Pat Narduzzi was asked, and rightfully so, about the speed Saturday’s opponent Louisville possesses. I guess he’s had enough of the questions.

“We will take our untalented, slow guys to Heinz Field and maybe we’ll give them a little extra Gatorade before the game so somehow we will have a chance to be in the game at some point,” Narduzzi said Thursday.

Narduzzi said it with a smile, but there was a theme to his comments when asked later if his offense would throw it deep.

“We would like to, but our guys are slow,” Narduzzi said.  “It’s hard to push it deep when you are slow.  So we have to be careful throwing it deep to slow people.”

Then about ACC Linebacker of the Week, the relatively fast Cam Bright.

“He’s got better speed than the slow white guys we got, like me.”

Narduzzi said he really doesn’t pay attention to the lack of national media coverage of his team, he just wants the respect of those locally.

It is a big game for Pitt, the first battle of ranked teams at Heinz Field since 2009 against Cincinnati with the Panthers ranked 21st and the Cardinals 24th.

It would also continue to build momentum for a potential breakout season, for those slow to the party.

“We’ll take our no-name guys with no speed into the game and find out what we got,” Narduzzi said.  “They are really fast.  They are quick.  They look really good.  We will find out what the Panthers have Saturday at noon.”