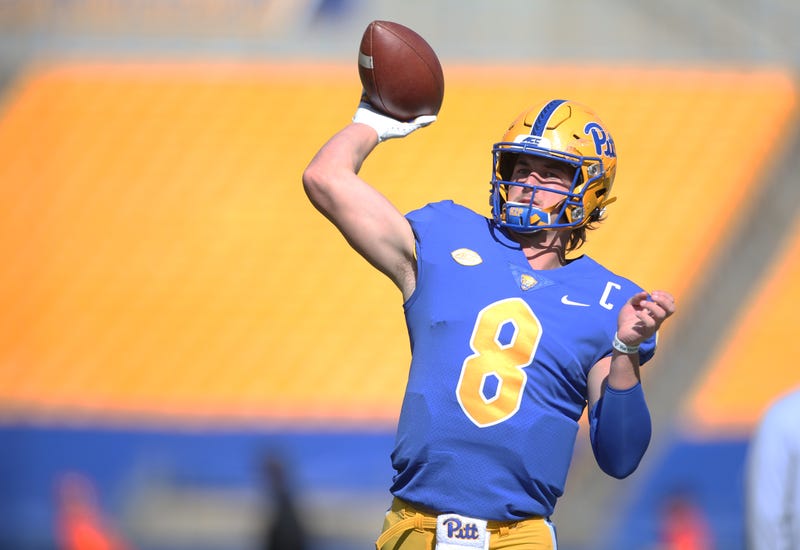 PITTSBURGH (93.7 The Fan)- The no. 21 Pitt Panthers have a giant matchup this Saturday when they welcome 24th ranked Louisville into Heinz Field for a noon kickoff.

Pitt head coach Pat Narduzzi joined The Fan Morning Show Thursday to talk about the challenges this game presents for his team. But first, he expressed confidence in his offense’s development through the first two weeks of the season, particularly with his quarterback.

“I’ve got a lot of confidence in coach [Mark] Whipple and obviously Kenny Pickett, the guy running the show out there. He continues to progress in the direction we want, I think he’s an outstanding quarterback. I said last week to somebody that he’s the most underrated quarterback in the country.

People look at him like, ‘Who’s Kenny Pickett?’ [I’m] like, ‘Are you kidding me? You guys are going to be watching him on Sundays next year, I promise you that.’

I have no doubts about that. Regardless of how many games he helps us win or not.”

Narduzzi also expressed confidence in his receiving corps, citing freshman Jordan Addison and sophomore Jared Wayne in particular as weapons. He said the running game is “getting a little bit better” and that he is happy with where it is so far.

Pitt’s senior kicker Alex Kessman has yet to make a field goal through the first two games, going a combined 0 for 3 to this point.
Narduzzi said he’s got that taken care of as well.

“I’m a positive guy. This is what I can tell you. It’s fixed. I feel like it’s fixed physically, mentally, the whole deal. I think there was something he was doing and he’s the only one that can know he’s doing it.

We actually practiced with the other team out there screaming at Kessman this week at practice. I want it to be as realistic to Saturday as possible. There’s no fans…I mean the things they were screaming over there…it was “R” rated, for sure. Whether that got to him or not, I don’t know. But I don’t expect him to miss another field goal.”

The Panthers come into Saturday after having beaten Syracuse 21-10 last week while Louisville is coming off a 47-34 loss to 12th ranked Miami.