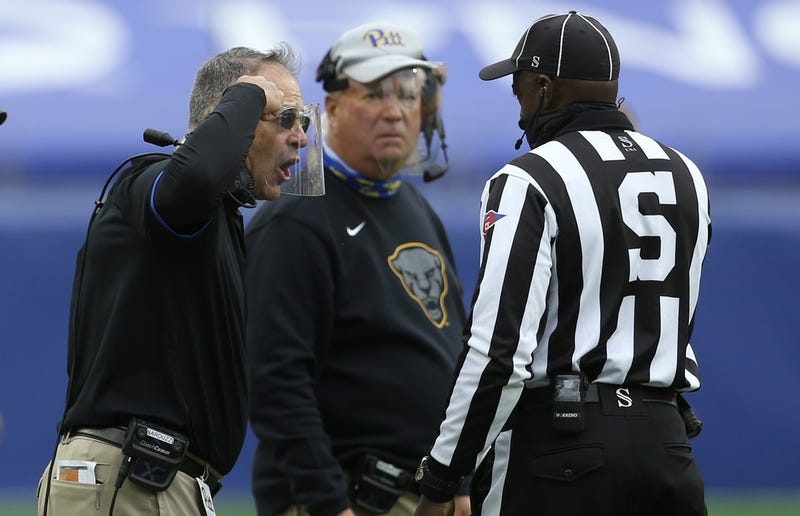 PITTSBURGH (93.7 The Fan) – This was an opportunity for Pitt to restart the season, unbeaten and number 3 Notre Dame at Heinz Field and for the first time the Panthers had home fans.

Instead, the Panthers performance was as dull as their uniforms.

Notre Dame won in every significant category besides penalties, Pitt had more of them, in a 45-3 loss on Saturday.

“They are the number three team in the country.  I would imagine we are probably looking at a Clemson-Notre Dame, based on what I’ve seen, in an ACC Championship game.”

Quarterback Kenny Pickett was unable to play for a second straight week due to an ankle injury.  Narduzzi said Pickett could return by their next game.

After a solid first start as a Panther, back-up QB Joey Yellen struggled with 3 interceptions.  The first of which was in Panther territory and led to the third Notre Dame touchdown to make it 21-3 late in the second quarter.

What really sealed the game was the next series.  After an 11-yard run on first down, the Panthers stumbled backwards and Notre Dame called time out after another failed rushing attempt with 20 seconds left.  Instead of just kicking it away, punter Kirk Christodoulou hesitated to kick and the punt was blocked and recovered by Notre Dame to go up 28-3 at halftime.

Pitt ran 53 plays for 162 total yards, while Notre Dame ran 83 for 434 yards.  Pitt barley had over 2 yards per rush and only did due to some gains late in the game.

It’s a bye week for Pitt next Saturday with three of the last four on the road including number one Clemson and their last home game is against number 19 Virginia Tech.

“The next four games are going to be crucial games that we have to step up and win,” said linebacker Chase Pine, adding they need to be like a family right now.  “If we get those wins, it will be a different conversation than we are having right now.”