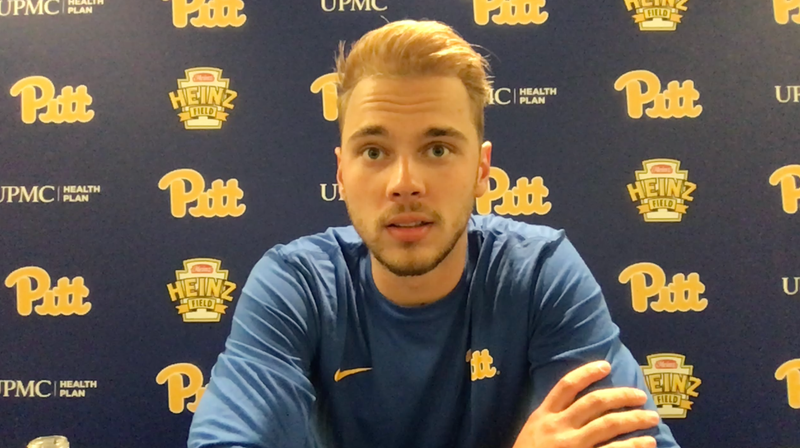 “Football is 80 percent mental, and 40 percent physical,” he said, to the bewilderment of the children listening.

Though Emtman’s math was a bit off, there’s a point to his message.

The game of football, especially for a more isolated player like a kicker, can be a real mind game.

And that’s where Pitt’s Alex Kessman has been for the last couple of weeks.

Through the first two weeks of Pitt’s still unbeaten season, Kessman — Pitt’s reliable senior kicker — was off. He was 0-for-3, missing kicks from 42, 37 and 45 yards out.

Kessman knew he needed to change things up heading into Pitt's toughest matchup yet against Louisville.

“It was a long two weeks, that’s for sure,” he said. “I stopped being so robotic, stopped thinking. I just went back to a natural kicking style.”

His head coach, Pat Narduzzi, claimed on his 93.7 The Fan radio show Wednesday that Kessman’s issues were “fixed.”

While Narduzzi pointed more to mechanical remedies — something Kessman agreed with — the kicker also highlighted another problem area: between the ears.

“I reflected on those two games and put them behind me,” he said. “I just cleared everything out. I know how to kick the ball. So I told myself to just go out there and kick the ball.”

Good thing he did, because he had no room for error Saturday. Kesssman banged through kicks from 45, 41 and 42 yards as Pitt topped the Cardinals, 23-20, at Heinz Field.

The 42-yarder turned into Pitt’s only points of the second half and held to be the game-winner.

“Proud as heck of Kessman,” Narduzzi said. “We have a lot of faith in him and he’s 3-for-3 today. That’s why they call us ‘coach,’ to get them right. Those are the details that great football teams do.”

Kessman opened up more about the inner-workings of a kicker’s brain, especially when struggling.

“My mental preparation going into (the Louisville game) was a little bit different,” he said. “I went back to what I was doing at the beginning of camp, where I would meditate every day and just slow the world down a little bit for myself.”

“I talked to Dr. Rosen, who is my sports psychologist," he said. 'I’ve talked to him since my sophomore year, and I hadn’t talked to him this year. What he told me, it just set me in the present.

“Maybe my mind was down the road or something. But I think that he brought me back and grounded me. He told me to just trust myself. I’ve done it before. I’ve proven that I can go out there and kick the ball, and he just said ‘go out there and kick, stop thinking.’”

Kessman’s revelation of working with a psychologist comes at a time where mental health, particularly among younger people, is at a heightened level of concern.

“What (Dr. Rosen) said to me on Wednesday will stick with me for a while, probably a long time,” Kessman said. “I think I really just needed somebody that knows what they’re talking about. I felt like he knew exactly what my mindset was and where I was mentally and physically.

“He just brought me back and re-centered me. I felt good today.”

Kessman delivered three times on field goals, plus a pair of extra points for his offense, led by quarterback Kenny Pickett, who says he turns to other avenues to get a break from the pressures of his role.

“You can fall back on your teammates,” Pickett said, while also highlighting his coaches. “I’ve got great people in this locker room and I’m very grateful to be on this team. I think we’re all moving in the right direction.”

It may be easy to forget that athletes, at all levels, may be struggling with the same issues as anyone else. The global pandemic and other current events have brought on unexpected stress for many.

Kessman tries to get a break from that by using an app, called Calm, to do frequent meditation sessions. He meditates for 30 minute, guided sessions.

“I just take a deep breath,” he said. “The world right now is too fast. People need to just slow down and reflect on themselves.”

Kessman did just that. And now, thanks in part to his willingness to seek out help in a more nonconventional avenue, he gets to reflect on a 3-0 start for the Panthers.