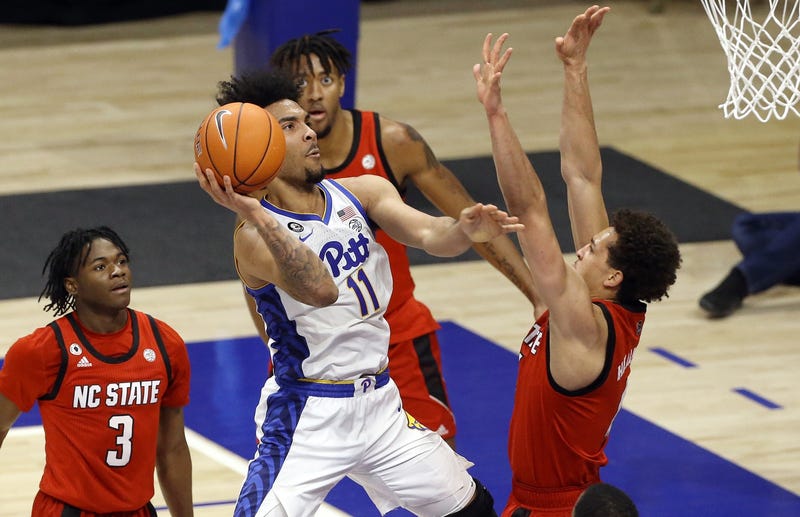 PITTSBURGH (93.7 The Fan) – Having lost six of its last seven, Pitt basketball is attempting to salvage a once top-half of the ACC season. They will be challenged by hosting 16th ranked Florida State (12-3, 8-2) Saturday at 4p on 93.7 The Fan.

“There is only so much talk we can do at a certain point,” said sophomore Justin Champagine.  “We just have to lock in together as a team.  We gotta come every day and be ready to fight.  Go after each other and make each other better.  Then get on the court and get after Florida State or whoever we are playing.

“I feel like if we go out there with the right energy.  We can win.  It’s all about sticking together.”

Energy has been an issue on the defensive side during this slide, giving up 70+ points in nine consecutive games.  Champagnie said the team addressed that in practice on Thursday and Friday.

“We did a lot of defensive drills,” Champagnie said.  “It’s all about heart.  We have to have that fire in us that we had in the beginning of the year.  So we can get back to who we are and what we do.”

The Panthers upset Florida State at home to start last season and have won a couple of times in the last few years against the Seminoles at the Petersen Events Center.

“Be tough,” Champagnie said.  “Every time that we played them here, we out-toughed them.  That’s all we got to do.  Just be tougher, be more physical.  Just be ready to fight.  They are going to make runs.  They are a really good team.  We just have to be able to slow them down and make runs of our own.”

“We still have a pretty good spirit,” Champagnie said.  “We just stay confident and if we can get this next game we can get back on track.”

In 2020, they were in a similar situation and never were able to get it back going, but the ACC’s leading scorer and rebounder believes that it’s different now.

Champagnie addressed a couple of other topics on Friday.

“It’s about focusing on us.  We get too in to talking to other players or other teams.  Just worry about what we’ve got going on.  We can blame nobody but ourselves.  We have to be better at that.”

“I’ve been wanting that game since freshman year.  Talked to Coach about it all the time.  Let’s just do it.  To see that it’s going to happen next year means a lot.  I can’t wait to get out there and hoop against him.”

Distractions off the court (mostly speculation about his future & the NBA)

“I don’t really deal with it that much.  I see these things and I’d be like ‘oh whatever’.  I don’t really care.  My focus is here.  I just want to try and make a run at the ACC Tournament and the rest of the season.”

“All the other stuff is just nonsense to me.  It’s just talk right now.  I just want to finish out this year.”