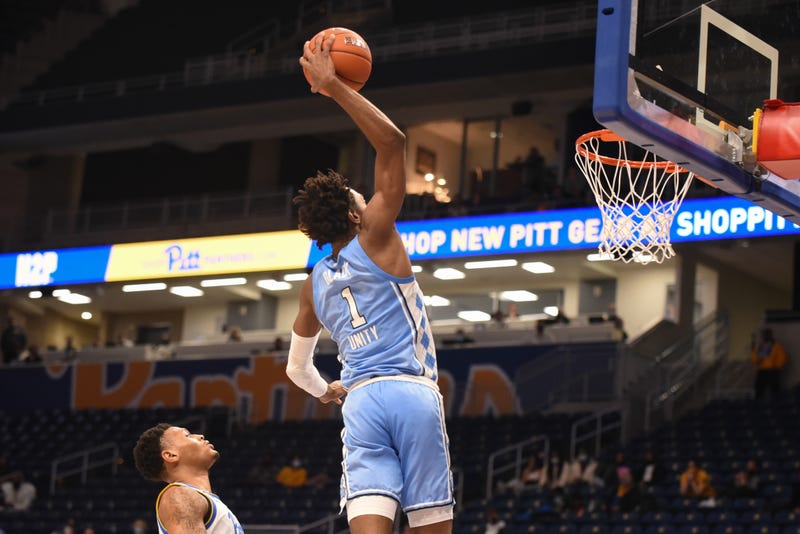 PITTSBURGH (93.7 The Fan) – North Carolina avenged a two-game losing streak to Pitt, by dominating the glass and beating the Panthers-75-65 at the Petersen Events Center Tuesday night.

“We are a good defensive team when we want to be,” said forward Justin Champagnie.  “I feel like we have to learn basketball is a game where you can’t flip a switch.  You can’t turn it on and off, including myself.”

“I feel like we have to be more energic from the jump.  We had some lackadaisical plays and they took advantage of it.  That’s what happened.  They won.”

North Carolina came into the game a plus 11 rebounding and outrebounded Pitt 37-29 including 14 on the offensive glass which led to 18 second chance points.

“We knew rebounding was going to be a significant portion of this game.  We know that’s a major strength of theirs.  They are number one in the conference and number two in the country in offensive rebounding.”

That board work led to a 48-32 Tar Heels advantage in points in the paint.

“They outscored us because of offensive rebounds,” Champagnie said.  “Literally that’s the only reason I feel like we lost.”

Another highlight reel dunk with the left hand this time.  Keeping Pitt in the game in the first half with 13 of the 27 points on 3-3 shooting from three.  Champagnie finished with 23 points and 10 rebounds, making 7 of the 9 attempts from the field.

The sophomore admitted Carolina’s size limited some of what he wanted to do.  Capel wants more attempts from his best player.

“I don’t think they stopped me from getting shots,” Champagnie said.  “They pressured sometimes and we didn’t find the right passes or find the open guy a lot of the times.  That’s what happens.”

Panthers host Notre Dame on Saturday as the Fighting Irish host Virginia Tech Wednesday night winners of two straight and 5-8 on the season.  Before those two wins, the Fighting Irish hadn’t won a game since before Christmas.  Tip at 8p with Panthers Pregame at 7p on 93.7 The Fan.

A second game back from a 32-day layoff due to COVID-19, the Pitt women’s team got its second ACC win, both coming against Clemson.  Panthers win 79-69, outscoring the Tigers in every quarter as freshman Liatu King led the Panthers with 15 points and 8 rebounds.  Destiny Strother also finished with 15 points as well on 6 of 8 shooting.