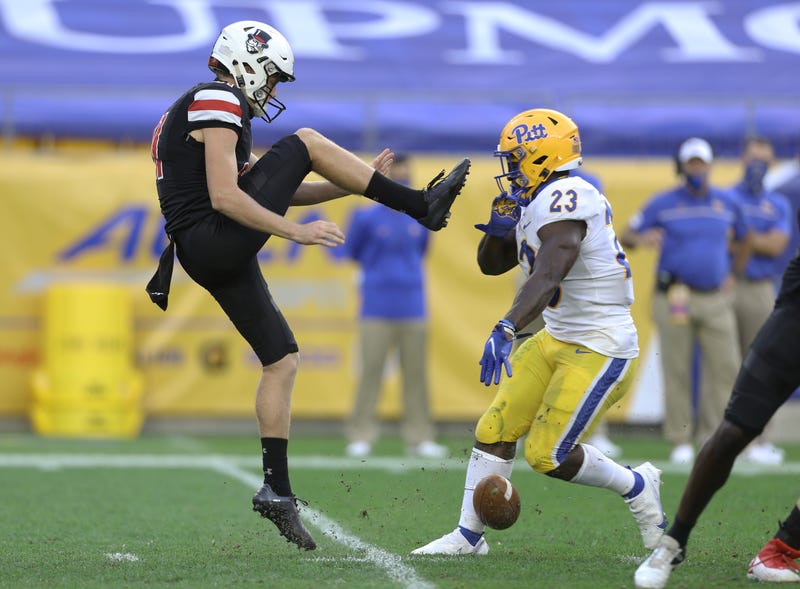 Pitt safety Paris Ford came away with an interception on the game's opening series and Pitt converted the turnover into a touchdown.

The tone was set. And that was all that Pat Narduzzi’s team needed, rolling over Austin Peay 55-0 in front of an empty Heinz Field Saturday evening.

But the game was not without concern for the Panthers. Shortly before kickoff, Pitt athletics announced that seven players would not participate in the game due to COVID-19 protocols.

The release did not specify which players would miss the game, but two starters on the defensive line, Rashad Weaver and Keyshon Camp, did not play.

Weaver confirmed on Twitter that he was missing the game to do inconsistent COVID-19 tests.

“I’m not going to talk about those guys,” Narduzzi said afterwards. “You guys know what’s going on. You know what the climate is.”

After Ford’s interception, Pitt scored on six straight drives, including five rushing touchdowns, taking a 42-0 lead to the locker room. The teams mutually agreed to play only ten minute quarters in the second half.

“We talked all week about coming out and making a statement. Since I’ve been here, I feel like we haven’t come out (in an opening game) and exploded against anybody.

I don’t want to say we’ve played down… But the big emphasis today was to play up. We were going to show that we’re a different football team and we were going to make a statement to the country about who we are and what kind of weapons we have in all three phases of the game.”

Pitt quarterback Kenny Pickett tossed for 277 yards and a touchdown, completeing 14-of-20 passes. He also rushed for 23 yards and a score.

But Pickett, the senior, three-year starter, was accompanied by a number of players who were not contributors at Pitt a year ago.

“I thought he did a great job,” Pickett said. “(He’s an) explosive kid and showed that today. (I'm) excited to build off this one going into next week.”

Pitt forced three turnovers, allowed just three rushing yards and blocked two punts. In all, Narduzzi said that 70 players were able to see the field in the lopsided victory.

But the seven missing players and empty stadium was a reminder of the fragility and reality of playing sports amid the pandemic, and the seriousness of that was not lost on Pitt’s players.

“It’s disappointing and extremely heartbreaking to guys who are in a similar  situation as I am,” senior center and captain Jimmy Morrissey said. “I try to put myself in their shoes, it’s really sad. But, at the end of the day, it’s the world we live in. The team has done a great job adapting. 2020 is a crazy year.”

Pitt plays Syracuse next Saturday at Heinz Field. Narduzzi said that he anticipates getting back the players kept out in Week 1 for the ACC opener.

“When games start getting cancelled and you hear pregame that Virginia Tech has a problem down there, you just kind of look at each other like, ‘hey, Pitt could be next.’

And we don't want to be next. That was our message to our football team to go out there tonight, go to your room, put your mask on and do things the right way, because everybody's susceptible. Anything can happen, and we want to make sure that doesn't happen to the Pitt Panthers.”