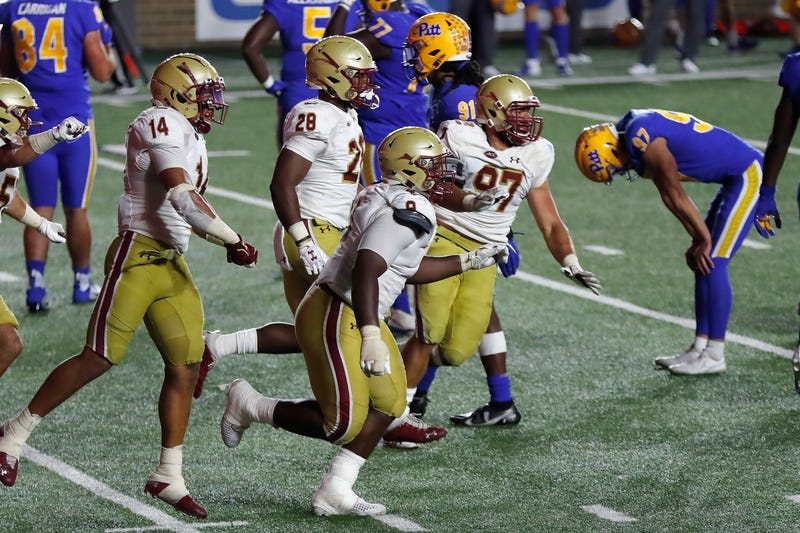 BOSTON (AP) — Boston College coach Jeff Hafley was trying to figure out how to stop Pittsburgh's offense in a second overtime when he took a quick look and realized the game was over after the Panthers missed an extra-point attempt to give the Eagles a 31-30 win on Saturday night.

“I was getting ready to go back on defense again and glanced up from my sheet and saw it was wide right,” Hafley said. “I think I actually jumped up on that.”

Phil Jurkovec threw three touchdown passes to Zay Flowers — the last a 25-yarder in overtime — and ran for a score to lead BC (3-1, 2-1 Atlantic Coast Conference).

“I was super shocked,” Jurkovec said of the missed PAT. “I was surprised because the kicker made the 58 yarder.”

Jurkovec, a sophomore transfer from Notre Dame, was 19 of 35 for 358 yards passing as the Eagles rebounded from a frustrating close loss to then-No. 12 North Carolina. Flowers had six catches for 162 yards.

Kenny Pickett completed 25 of 48 passes for 266 yards for Pittsburgh (3-2, 2-2). He threw two TD passes, ran for a score, and then limped off the field late in the third quarter but returned in the next series to throw an interception.

On BC’s first possession in overtime, Jurkovec threw a strike down the middle to Flowers in the end zone on third-and-10.

Pitt answered in OT when Pickett hit Taysir Mack with a 3-yard TD pass, but Alex Kessman missed wide right on the PAT. Kessman had hit a 58-yard field goal with 40 seconds left in regulation. BC’s Aaron Boumerhi was wide left on a 52-yarder as time expired to force overtime.

“Came up a little short with that extra point,” Pitt coach Pat Narduzzi said. “It’s disappointing, but we’ll stick together.”

A week ago, at the same end zone, BC lined up for a potential game-tying 2-point conversion with 45 seconds to play, but North Carolina’s Trey Morrison picked off Jurkovec and returned it for a score.

Pittsburgh rallied from a 10-point deficit.

Vincent Davis’ 4-yard scoring run sliced it to 24-21 late in the third. The Panthers took over at their own 38 with 3 1/2 minutes to play and marched to BC’s 26. Max Richardson sacked Pickett on third-and-5 for a 15-yard loss before the game-tying field goal.

Jurkovec hit Flowers with a 77-yard TD pass down the middle on the second play after halftime to give the Eagles a 24-14 lead. Jurkovec also found Flowers with a 44-yard strike in the left corner of the end zone early into the second quarter.

“He’s a good football player and that big pass in the second half took the wind out of us," Narduzzi said of Flowers. "Great throw by Phil.”

BC led 17-14 after an entertaining first half that was filled with pass interference calls, three long scoring drives — two by the Eagles — and over 300 combined yards passing.

In a matchup of the conference’s second and third ranked quarterbacks in yards passing per game, (Pickett was second and led with 1,123 total yards), both teams came out up-tempo on their first possession and drove easily before things settled down in the second quarter.

Pittsburgh: The Panthers’ defense came into the day second in the nation in fewest yards allowed per game but was picked apart. After giving up a late scoring drive in a loss to N.C. State last week, they’ll have to fix things quickly with tough matchups at Miami and against Notre Dame the next two weeks.

Boston College: Seems a bit ahead of schedule under first-year coach Hafley, but if Jurkovec keeps playing the way he is the Eagles will be a tough matchup for anyone.

Jurkovec has thrown for a program-record 1,181 yards in his first four games.

Pittsburgh: At No. 7 Miami on Saturday.