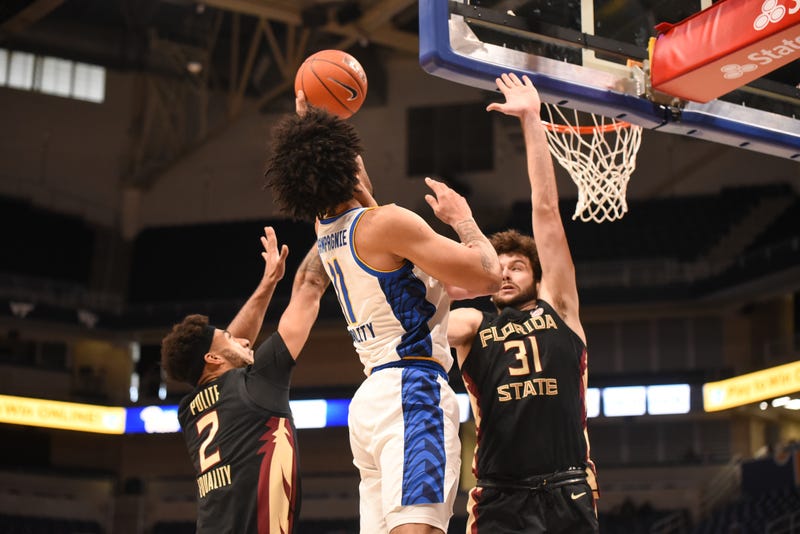 Seminoles had four players in double figures led by 6’8”, 260 pound RaiQuan Gray with 16 points and 8 rebounds.  FSU had 44 points in the paint to go with 43 rebounds.

“They come at you in waves,” said Pitt head coach Jeff Capel.  “They are a very, very good basketball team.”

“I’m very proud of our effort.  I felt we fought for 40 minutes.  I thought we did some really good things.  I thought the game came down to at times our inability to finish.”

Justin Champagnie again led the Panthers with 21 points and 10 rebounds.  Xavier Johnson with 15 points, 14 in the second half with 3 assists and 3 turnovers.

Of the areas that really stood out in Florida State’s favor-bench points.  The Seminoles with a 33-9 advantage led by Scottie Barnes with 11 points, 6 rebounds and 3 assists.

Freshman Femi Odukale had most of the Pitt bench points with 8 on 3-5 FG with 3 rebounds and 3 assists.

For the second time this season, Pitt was without second leading scorer Au’Diese Toney.  The 6’6” forward missed the Louisville game with a lower-body injury and missed Saturday’s game against Florida State with an undisclosed injury.

Toney averages 14.4 points a game, second on the team with 5.9 rebounds a game, second on assists at 2.3.  Toney had a season-high 22 points and 11 rebounds in the win over Duke.  Pitt head coach Jeff Capel says Toney is a ‘glue guy’ for his team as well as its best defender.

“It’s rough,” Champagnie said of missing Toney.  “He’s one of our top scorers.  Not having ‘Diese, it hurts us.  He brings a lot of toughness to our team.”

Miami transfer Nike Sibande got a spot start with 12 points (4-13 FG) and 7 rebounds.  He said he knew the day before the game he would be in the starting five.

“It was definitely interesting getting out there and getting more minutes,” Sibande said.  “I have to get into a rhythm and I’ll shoot at a better clip.”

“I’m not satisfied with that.  I feel like I could have shot the ball more efficiently.  I’m going to break it down and look at the film.  See where I could have effect the game at different places and just learn from it.”

As of right now, the Panthers aren’t scheduled to play against until Sunday, February 28 at NC State.  Wolfpack had a 74-73 win at the Pete on Wednesday, February 17.

Capel said depending on the health of their team.  They could add another game, dropping a 2021 truism.

“You can’t pay attention to the schedule.”