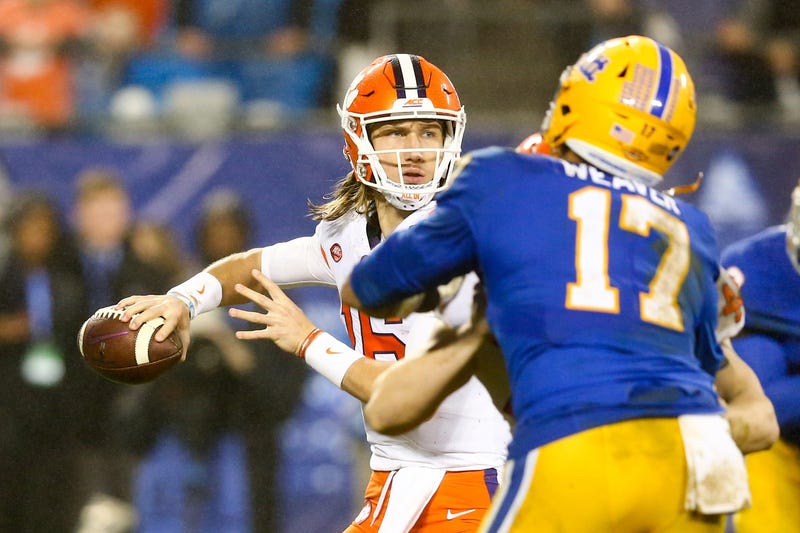 PITTSBURGH (93.7 The Fan) – Only LSU in the national championship game has held Trevor Lawrence to a lower completion percentage in a game than Pitt did in 2018. That game was still all Tigers due to a strong defense. Do the Panthers have a formula that could disrupt Lawrence on Saturday?

“It’s the key every week to get pressure on the quarterback with him especially,” said senior defensive end Patrick Jones.  “That’s something that we are going to have to do.”

“He's really, really good,” said head coach Pat Narduzzi.  “He's got a quick release, as I think I talked two years ago, you watch it and it's like, "zoom."  He rifles the ball out there.”

“He knows where to go with the ball, he makes quick decisions. They don't take many sacks, and they don't make bad decisions. And he's really getting the ball out to Etienne out of the backfield more than ever.”

“He throws the ball like no one that we’ve seen all year,” said senior safety Damar Hamlin.  “He got a missle.  Veteran quarterback, smart with the ball, smart decisions.  He leads his team, that’s for sure.”

If there is a player that Lawrence reminds Narduzzi of, it’s someone he can see across the practice field at the UPMC Rooney Sports Complex.

“I mean Ben Roethlisberger was pretty good when we faced him at Miami of Ohio back in 2002,” Narduzzi said.  “I look at what he did that year that we played against him. He's like Ben, he's explosive.”

Lawrence has played in only six games and really only a part of the game against the Citadel.  The junior is 135-191 for 1833 yards with 17 touchdowns and two interceptions and a QB rating of 178.6.

“Trevor is certainly one of the top two quarterbacks in the country if not the No. 1 guy -- I would say he's No. 1,” Narduzzi said.  “I would say he's your Heisman Trophy guy.  Went through COVID, all of a sudden he slips.  I don't understand how that works.  We're in a pandemic and he shouldn't lose any votes for Heisman because he didn't play in a couple games because of COVID.  It wasn't like he made a bad decision and got whacked in the backfield and went down and threw a pick at the same time. His play on the field speaks for itself.”

Trevor Lawrence has lost one game in his career, one.  And that was the aforementioned title game to LSU.

It will take something extremely special to beat him Saturday.  There will be no lack of motivation and not just to get a career-defining upset.

“What happened in that championship game (2018) is something that I will never forget,” Jones said.  “It’s definitely a taste that we are going to remember.  We are going to go into that game with a chip on our shoulder.”