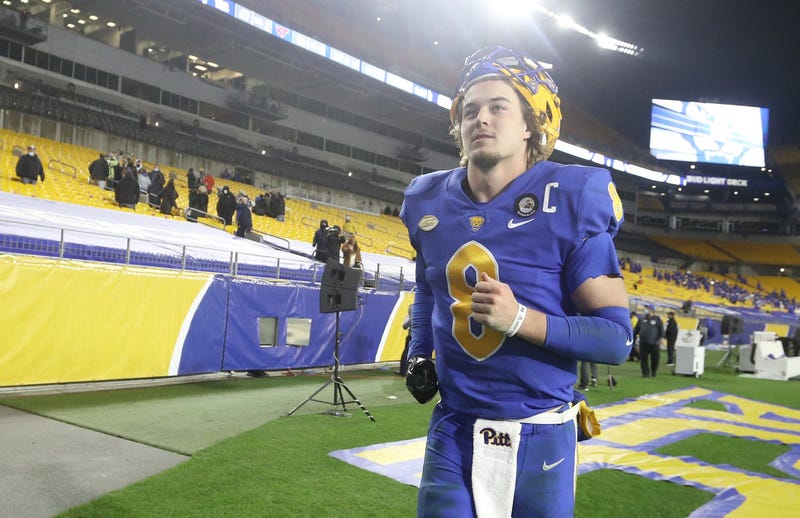 PITTSBURGH (93.7 The Fan) – Without 16 players due to COVID-19 protocol, Pitt never trailed and pulled away in the second half for a 47-14 win over Virginia Tech.

Half of those 16 players were starters including three of the five starting offensive linemen and while senior Jimmy Morrissey played, he wasn’t able to practice all week.

“Heck of a job by our offense and Coach Whipple just putting it together and having belief in our kids,” said head coach Pat Narduzzi.  “I heard the comment earlier in the week ‘coach are you really going to put Kenny Pickett behind that offensive line’?  Yes, we’re gonna and we are going to go out and win.  That’s Pitt football.”

Playing in his last game at Heinz Field, Pickett threw for 404 yards and two scores and had his seventh rushing TD, which is the most by a Panthers QB in a season since Rick Trocano in 1978.

“It started on Tuesday as Kenny Pickett had the focus and said ‘listen I don’t care who is on the field, I will play with any of my brothers here’,” Narduzzi said.  “To me, that was the key, when he said that I was like ‘here we go, let’s go’.  That’s your senior leadership, that’s your senior captain.  Incredible win for our kids today.”

“I had faith in every single guy who was out there,” Pickett said.  “The biggest thing in football is trust.  You have to trust the 10 guys out there and I think we did that tonight.”

Senior receiver DJ Turner nearly doubled his best game ever playing football, as far as catches, with 15 for 184 yards (2 yards shy of his career high) and seemed to will his team with YAC yardage.

“Phenomenal—DJ is a football player, senior day for him, he was outstanding,” Narduzzi said.  “He had some big conversions on third down.”

“I didn’t think this would happen going into the game,” Turner said.  “I knew in the first quarter that I had a lot but I kind of stopped counting.  In the fourth quarter someone told me that I had 15 catches and was one away from a record.  I was like ’15 catches, that is ridiculous’.”

Turner was able to share senior day pregame with his one-month old son Darrell Turner the third, saying it was big and that he thinks about him every play.

Senior tailback AJ Davis had a root canal on Saturday morning and then rushed for 80 yards on 12 carries including a touchdown.

Senior kicker Alex Kessman made his 11th and 12th field goals beyond 50 yards.  No one in the history of the NCAA has a higher percentage from beyond 50 yards than Kessman with a minimum of 15 attempts (66.7%).

Senior safety Damar Hamlin had to switch safety positions mid-game due to Brandon Hill sitting with COVID-19 protocols and game-planning by Virginia Tech.  Hamlin led the Panthers with 11 tackles.

“They played a video of my family right before I ran out for my senior walk-out, that was a special moment,” Hamlin said.  “Just seeing my little brother, my mom and my dad, all just saying a final goodbye to Heinz Field as a Pitt Panther.”

“It’s really special, not just for me, but for all the seniors that we have,” Pickett said, admitting he got choked up earlier in the week thinking about it.  “Definitely an emotional day for everybody and a special one that we will all remember.”