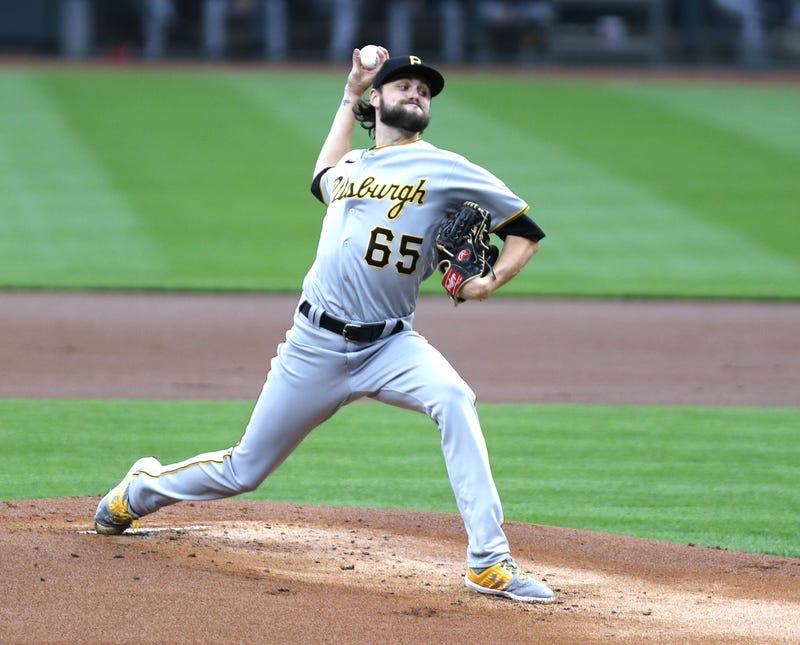 CINCINNATI (AP) — Cincinnati’s Luis Castillo pitched a masterful seven innings, Shogo Akiyama drove in the game’s only run, and the Reds moved into a virtual tie for second place in the National League Central Division with a 1-0 win over the Pittsburgh Pirates on Wednesday night.

Castillo (3-5), coming off his first career complete game in a 3-1 win at St. Louis on Friday, retired nine of the last 10 batters he faced and gave up only three hits and a walk with 10 strikeouts, helping the Reds extend their winning streak to a season-high five games.

“He backed up his last start," Reds manager David Bell said. "He couldn’t get much better than that, but to be able to back that up was huge for us,”

Castillo's combination of a fastball that can reach 98 mph and a nearly unhittable changeup was unbeatable, Pirates manager Derek Shelton said.

“I thought his changeup was that good," Shelton said. "He was really good. Not only did his changeup have down action, but his fastball is usually side-to-side, but tonight it was straight down. He didn’t make many mistakes, and the ones he made, we hit right into the ground.”

Archie Bradley pitched a perfect eighth before Raisel Iglesias pitched a 1-2-3 ninth for his eighth save.

Pittsburgh rookie J.T. Brubaker (1-2) tied his career high with 5 1/3 innings, giving up five hits and the lone run with one walk and four strikeouts.

Brubaker, who grew up about 90 miles north of Cincinnati in Springfield, Ohio, allowed a hit and a walk in four innings before the Reds pieced together a two-out rally in the fifth on consecutive singles by Jose Garcia, Curt Casali and Akiyama, whose liner to left knocked in Garcia.

Even though he lost, Brubaker basked in the challenge.

“Very enjoyable just going out and trying to make sure that you’re not the guy who gives up that one run," he said. "Unfortunately, I was the one, but just seeing who gives up that first run was enjoyable. Everyone wants to see home runs, but I think pitchers’ duels are more enjoyable.”

The Reds went into Wednesday’s series finale one-half game behind second-place St. Louis in the Central and ninth in the overall NL standings, one-half game behind the Giants for the final postseason berth. San Francisco was scheduled to play the Mariners late Wednesday in a game postponed from Tuesday and moved from Seattle to San Francisco because of poor air quality.

St. Louis split a doubleheader at Milwaukee, winning the opener 4-2 and dropping the nightcap 6-0, leaving the Cardinals and Reds tied for second, five games behind the Cubs. The top two teams in each division and the two teams in the league with the next-best records qualify for the playoffs.

The Reds were higher than third place for the first time since mid-August.

“The clubhouse is very excited," Castillo said through an interpreter. "We are very, very happy and want to continue this momentum.”

The Pirates set a season low for hits and couldn’t get a runner past first base on the way to their season-high eighth straight loss. They scored a combined six runs in the four-game series.

“We definitely saw some good arms as of late," Pittsburgh first baseman Josh Bell said. "All it takes is a big hit in a big situation to turn things around. I was there two or three weeks ago. Every out seems like two or three.”

Pirates: Closer Keone Kela likely isn't returning to pitch for the Pirates with less than two weeks left in the season. He's been out with right forearm inflammation since Aug. 21. Pirates director of sports medicine Todd Tomczyk said Kela is playing catch but still not throwing off a mound.

Reds: LHP Wade Miley “threw well” during a side session on Tuesday, manager David Bell said before Wednesday’s game. “We’ll see how he recovers,” Bell said. Miley (0-3) has been out since Aug. 28 with a left shoulder strain..

Pirates: LHP Steven Brault (0-3) goes against St. Louis RHP Dakota Hudson (3-2, 2.92 ERA) on Thursday night. Brault is 0-7 with a 5.97 ERA in five starts and six relief appearances against the Cardinals in his career.