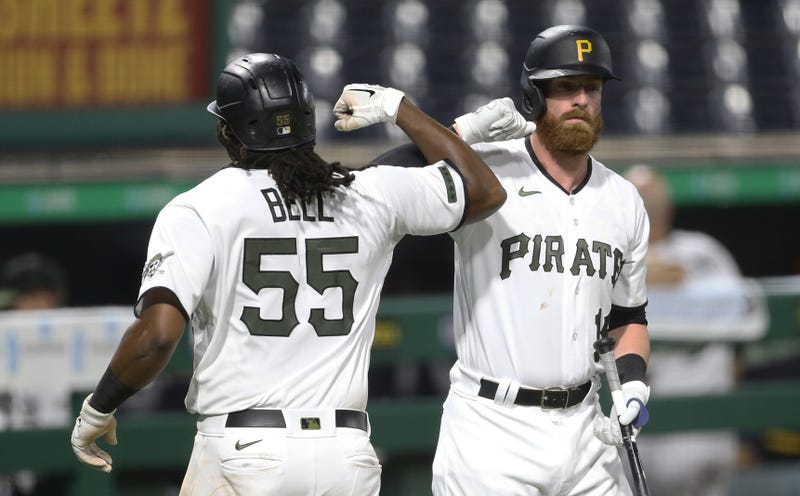 PITTSBURGH (93.7 The Fan) - Josh Bell will be in at battle to start at first base this year.

Manager Derek Shelton said during a Zoom call on Tuesday that there is going to be a lot of competition in camp, which he said was fun and excites him.  He said he’s talked to his team about it.

He later said certain players are penciled in at positions.

“Josh (Bell) and Colin (Moran) are going to get Abs,” Shelton said.  “I mean we have two really good bats there.  That’s going to be a challenge without the DH.  We may have to get creative at times at how we functionally use those guys.”

Moran led the team in homers and RBI last year (two more HR than Bell and one more RBI) and it’s not unfair to make Bell compete at first base, but just two years ago he appeared to be the future of the franchise.

“Stay strong and stay consistent,” Shelton said is his message to Bell during the time away.  “I think all hitters have the want to tinker especially when things aren’t going the way they want.  Just consistency going forward.”

“I think the big thing for Josh this off-season was just to get away and refresh and come into Spring Training next year with a sound, strong body and a clear mind.”

He won’t be the only one having to battle, Kevin Newman hit .308 in 2019 and was top 5 in RBI, second in hits and stolen bases, but will have to fight for his job.  They don’t have a centerfielder yet and we haven’t talked about the pitching.

“I think we have young players that are hungry,” Shelton said.  “We are fairly transparent with our players.  This isn’t something that would be new to them.  When we sat down with them in their exit meetings we talked about opportunities.  We talked about competition.  We talked about the specific things that guys need to do to get better to put themselves in situations to play more.”

“I’m looking forward to it.  I think it’s something that is going to create competition in our camp.”

music
HBO Max will be offering a cheaper service because 'most people … are not wealthy'
news
Family pleads for return of late son’s ashes after their U-Haul was stolen
sports
Report: Broncos LB Von Miller won’t face domestic violence charges
sports
Maia Chaka to become first Black female official in NFL history
news
WATCH: Drone photographer captures film of massive school of blacktip sharks
music
TJ Osborne shares part of his coming out process was realizing ‘there are guys out there like me’