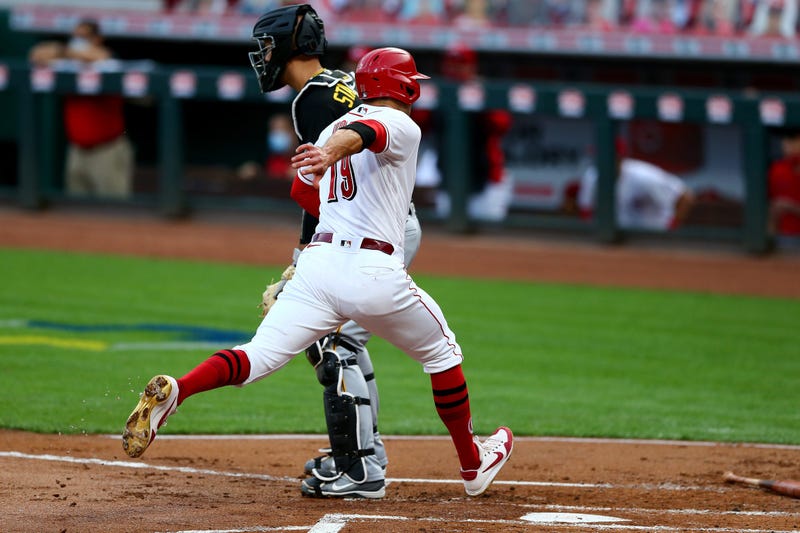 CINCINNATI (AP) — Tucker Barnhart hit a home run and Brian Goodwin prevented one with a leaping catch as the Cincinnati Reds extended their winning streak to a season-high four games with a 4-1 victory Tuesday night over the Pittsburgh Pirates.

Michael Lorenzen (2-1) looked sharp in a spot start, helping Cincinnati inch closer to a playoff spot. The third-place Reds went into the game higher than fourth in the NL Central for the first time since Aug. 23. They were 1 1/2 games behind second-place St. Louis and ninth in the overall National League standings, one game behind the Giants for the final postseason berth.

San Francisco's game at Seattle was postponed because of poor air quality.

The top two teams in each division and the two teams in the league with the next-best records qualify for the playoffs.

“It feels like we have a lot of momentum on our side and we haven’t felt that all year," Lorenzen said. "It feels like we’re picking up steam. It’s a really good feeling when you’re getting timely hits and robbing home runs like Goody did tonight. We haven’t felt like that. Balls are dropping in on offense instead of us hitting rockets at guys. A 60-game season can flip in an instant. It feels like we’re in a good position.”

Lorenzen, primarily a reliever since starting 21 games in 2015, made his first 2020 start as the Reds try to bolster a rotation hampered by injuries to Sonny Gray and Wade Miley. The right-hander allowed one run and four hits in five innings with no walks and six strikeouts.

“I really didn’t know what to expect," Reds manager David Bell said. "He has pitched three, four innings. He thought he was going to pitch a complete game, so I figured it would be somewhere in between. I didn’t want to limit him. He landed about right.”

Pittsburgh’s only run came in the fourth on Ke’Bryan Hayes’ double and Colin Moran’s single.

Tejay Antone and Lucas Sims combined for three innings of shutout relief before Amir Garrett pitched the ninth for his first career save, getting help from Goodwin’s grab that robbed Moran of a leadoff homer to center field.

Garrett took off his cap and saluted Goodwin.

“I saw it pretty good,” said Goodwin, acquired by the Reds from the Angels at the Aug. 31 trade deadline. “I’ve got a pretty good view out there, especially on the other side of the ball. You can really see it. I was locked in and focused on every pitch (Garrett) was throwing. I’m starting to get more comfortable knowing where the walls are and the track.”

The Reds took a 3-0 lead in the first while Joe Musgrove was throwing 28 pitches. Shogo Akiyama and Nick Castellanos opened the inning with singles and Joey Votto walked. Jesse Winker forced Votto at the plate with a chopper to Musgrove, but the right-hander hit Mike Moustakas on the left foot with a pitch to force in a run.

Barnhart led off the second with his fourth homer, a no-doubter to right field. None of the Pirates players even turned to watch.

Musgrove (0-5) settled down after Barnhart’s drive, finishing five innings. He gave up six hits, four runs and one walk. He retired 11 of the last 12 batters he faced.

“I felt good the whole night, really," Musgrove said. "No pun intended, but I kind of shot myself in the foot by hitting Moustakas with the curveball. If I punch him out, the flow of the inning’s different, the energy’s different. It’s super frustrating to have a guy in a count (0-2) like that and then put him on.”

Eugenio Suárez was scratched from Cincinnati’s lineup after being placed on the paternity list 3 1/2 hours before the first pitch. Suarez missed the afternoon team photo shoot.

The Pirates have allowed at least one home run in a season-high 12 consecutive games.

RHP Blake Cederlind, recalled earlier Tuesday, made his major league debut, taking over for Musgrove in the sixth.