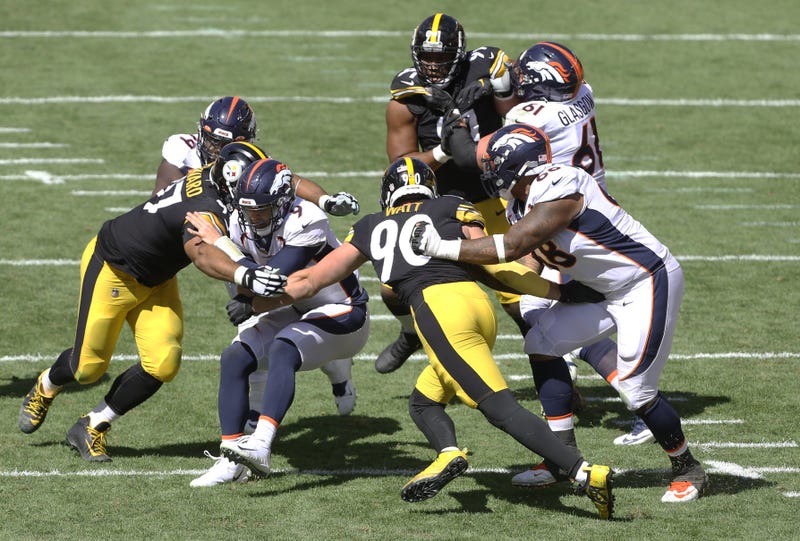 Here are some views from my cheap seat –aka the living room couch:

To use one of Mike Tomlin’s favorite words, obviously the 26-21 win over the undermanned (and now 0-2) Broncos was much too close for comfort.

They made some big plays, gave up some big plays, and in the end made the biggest play that clinched the victory – when Terrell Edmunds (who had been called for interference on a 3rd-and-11 to extend Denver’s final drive) came unblocked and sacked QB Jeff Driskel on 4th down with under 2 minutes left.

Ben Roethlisberger is back, but not quite. He answered the “he hasn’t thrown deep ball yet” questions with that pinpoint throw on Chase Claypool’s 84-yard and his cross-body 28-yard TD to Diontae Johnson yet he is still off-target on other, seemingly simpler, throws. But, as we saw last season, it certainly beats the alternative. The timing is going to improve.

James Conner was the healthy James Conner the Steelers will need. He was strong out of the gate then, after Benny Snell was banished following a 4th quarter fumble, Conner iced the game with a 59 yard run that came oh-so-close to shifting the betting line in Pittsburgh’s favor.

Snell’s fumble means he won’t be the #1 back until Conner in unavailable.

Johnson was all over the place, almost all of it good-to-great. After a muffed exchange on a jet sweep early, he was targeted 13 times for 8 catches including a TD but it’s his punt return game was on point.
His 81-yard TD returned was negated by penalty and his 24 yard return may have been more impressive, reversing his field twice.

Speaking of returners, Ray Ray McCloud is the real deal on kickoffs so the Steelers had better get used to starting from the 25 yard line after touchbacks.

Claypool is a keeper. After that high-point, toe-tap in the opener, he was able keep both feet inbounds without breaking stride on that 84-yard TD. Not only that, he made 2 tackles inside the 25-yard line on kickoffs.

It pretty much goes without saying that TJ Watt and Cam Heyward are great. Watt had 2-and-a-half sacks, sharing one with Heyward, and both had 4 quarterback hits. Bud Dupree was only slightly less disruptive, forcing a fumble with one of 7 sacks. But Tyson Alualu should start to get more run after 5 tackles, one sack plus a pass batted down at the line. The Steelers have not missed Javon Hargrave.

Mike Hilton led the team with 8 tackles, including a sack and recovered the Dupree-forced fumble. He was beaten a few times but made up for that with big plays, which was the case for all 5 of the “starting DBs.”

In that vein, Minkah Fitzpatrick is human. He misses the occasional tackle and even commits penalties. The Broncos didn’t seem to be afraid to go after Joe Haden and Steven Nelson but, so far through 2 games, the opponents, ultimately paid the price.

Oh, almost forgot to mention rookie RG Kevin Dotson and RT Chuks Okorafor. Know why? They weren’t singled out and that’s a very good thing for an offensive lineman.

With a home game against the Texans, then at Tennessee and back home against the Eagles, the Steelers have more than a few things to fix.
But as I mentioned earlier, after starting 2-and-0 for the first time since 2017, it certainly beats the alternative.