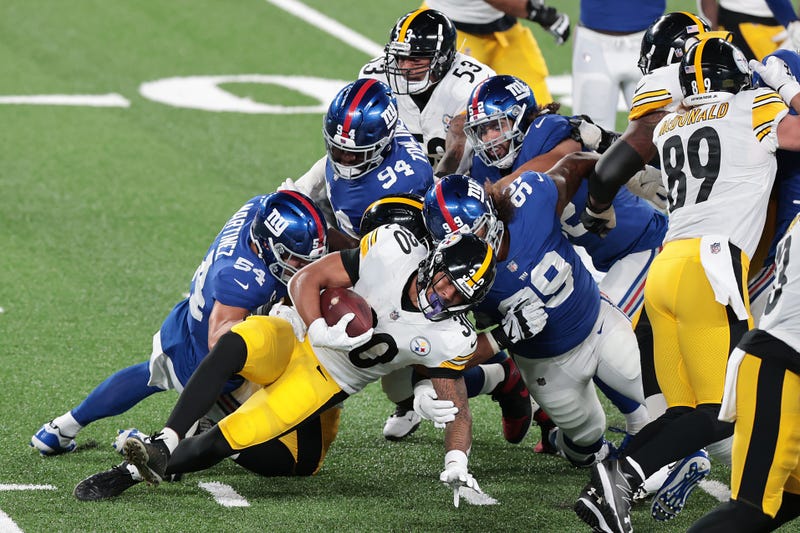 PITTSBURGH (93.7 The Fan)- The fears and concerns came about James Conner came to forefront almost immediately on Monday night against the Giants. All of the sudden Conner was on the sidelines, far away from the action and the ESPN broadcast was reported an ankle injury.

Benny Snell then took the bulk of the carries on his way to 113 rushing yards. The Fan Morning Show with Colin Dunlap and Chris Mack reacted Tuesday to what is now a sticky situation at running back.
Or is it?

“Even before we knew James Conner was hurt, Benny Snell looked better than James Conner (last night). This is now Benny Snell’s job to lose,” said Mack. “They’re both better running backs when they get fed the ball more often but James Conner just can’t withstand it. He just can’t stand up to the physical nature of the game. We’re seeing it right before our eyes and shame on me and anybody else who thought, ‘Hey maybe this is the year that James Conner stays healthy and does look like that bell cow or workhorse.’ We’re a quarter into the first game of the season and we already get it put on full display that he’s just not that guy.”
Colin Dunlap followed that up with a thought on how we, as fans, can view James Conner moving forward.

“Maybe we need to come to grips with this as a city. We need to reconcile something; we all need to have this moment. James Conner can be a heroic figure to you. He can be, and is, someone who beat cancer, you looked up to, you watched all the ESPN specials, you cried, you felt like you were part of his journey with him. He can be a hero to you, your kid, your grandma, a guy down the street, someone who fought a brave fight with cancer and all of that, he can be that person to you and he is. He can be an inspiration. He can be a guy you ran out and bought his jersey.

He can also be a guy who can’t stay healthy on the football field and when he is healthy, perhaps even be the second-best running back on this Pittsburgh Steelers football team. It can be all of that jumbled into one. Unfortunately, in society and in sports, we are only able to put things in single canisters nowadays. We’re not able to put into one big punch bowl and stir it all up.

That’s what James Conner is, though. It’s time that we just mix ingredients because that’s what it’s turning out to be right now and he don’t have to further divide all of this. He’s allowed to be all of that and, to me, that’s what he is.”
Chris added to that by saying, “When you’re used to seeing a guy, and he has, he’s persevered in so many ways, right? Both at Pitt and now in the NFL. He persevered, fought through cancer. He persevered, fought through an ACL. He persevered and fought through injuries over the last year in the NFL and you go, ‘Man, this guy just fights through stuff. He’s fighter.’ But at a certain point, when you’re hurt more often than recovered from being hurt, there’s nothing left to do. You’re at a point where you’re not available enough.

Secondly, when he is available, he’s not as good right now than Benny Snell. He looked like a guy who is just as willing now to not just put a shoulder into you and gain an extra 3 or 4 yards…but bounce it out and run around you for an extra 5, 6, 7 yards and we’re not seeing James Conner do those things. Even when healthy.”    ​