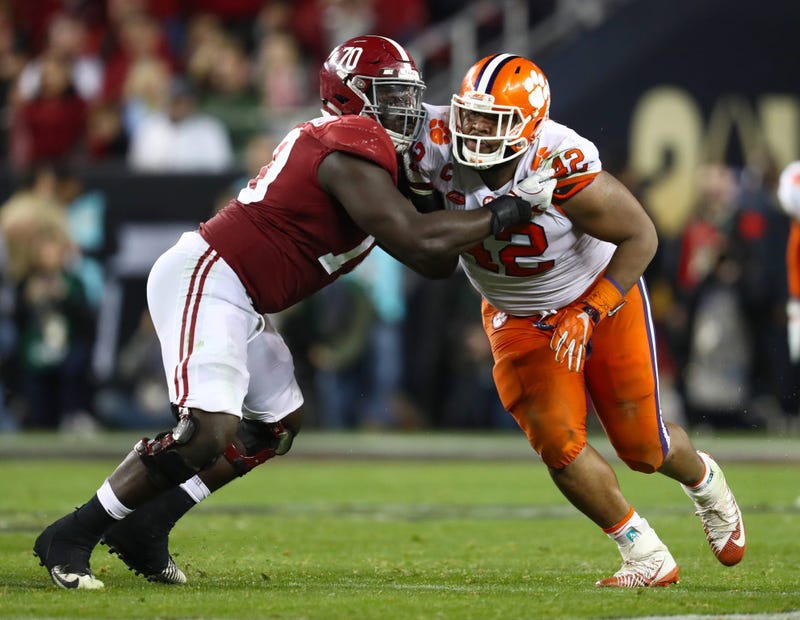 PITTSBURGH (93.7 The Fan) – Three months from the draft and with the Senior Bowl this week, here is a look at some experts picks of where the Steelers could do in the first round of the NFL Draft with our opinion of each.

CBS Sports (had three different mock drafts)
Jaelan Phillips 6’5”, 265 pound, R-Jr, DL, Miami
-FIT-can move to outside linebacker to replace
Bud Dupree-BACKGROUND-A 5-star high school prospect, who some considered the top HS player in 2017, started at UCLA, playing in 11 games in two seasons where he dealt with a variety of injuries including a concussion. Played just one season for the Hurricanes with 15.5 tackles for loss and led the ACC with eight sacks. He skipped the bowl game to prepare for the draft.
-OPINION-even with his potential, the team has too many needs on the other side of the football

Alex Leatherwood-6’6”, 312 pound, Sr, OL-Alabama
-FIT-immediately at left tackle for free-agent Alejandro Villanueva
-BACKGROUND-a 5-star recruit who was a top 5 offensive lineman in high school. With the depth at Alabama, Leatherwood was a back-up as a freshman, started at right guard where he was 2nd team all-conference and then to left tackle after Jonah Williams left. His junior year was first-team All-SEC. Came back for a second season and allowed two sacks. First Team All-SEC again and a finalist for the Outland Trophy.
-OPINION-there is some question about his mobility and that he might be a better fit at guard. Which may be his best position and still fits the team’s need as an heir apparent to David DeCastro.

Spencer Brown-6’9”, 321 pound, R-Sr, OT, Northern Iowa
-FIT-at worst, adds to the depth at offensive tackle, fighting for the likely open left tackle spot
-BACKGROUND-a man who came from a small town in Iowa with no stars next to his name and only got a late offer from Northern Iowa because of his size. A full-time starter in 2019 and was a preseason FCS All-American in 2020. His conference did not play in the fall and he decided to declare for the Draft. Known for his athleticism and obviously his ability to improve.
-OPINION-however unfair, he only started one season against FCS talent. How does that equate to the NFL, especially after not playing this season? Seems like a high-risk in the first round, even for the need at offensive line.

ESPN
Zaven Collins 6’4”, 260 pounds, R-JR, LB, Tulsa
-FIT-filling the role left by Bud Dupree opposite TJ Watt
-BACKGROUND-a three-star recruit by 247 Sports, the Oklahoma native ended up at Tulsa. He would become a starter a few games into his redshirt freshman year with 9.5 TFL. Sophomore season the TFL dipped to 8, but he had 97 total tackles. Collins filled the stat sheet his junior year-53 tackles, 11.5 TFL, 4 interceptions, two forced fumbles and a safety in 8 games. Explosiveness is the word that appears over and over upon his Draft reviews.
-OPINION-seems like a legit bottom of the first round prospect, but there are more pressing needs on the offensive side and Alex Highsmith showed potential last year.

College football News
Wyatt Davis 6’4”, 315 pounds, R-JR, G, Ohio State
-FIT-likely more long-term or at least 2022 with David DeCastro and Kevin Dotson likely the starting guards
-BACKGROUND-a 4-star recruit that picked Ohio State over Alabama and others. After redshirting as a freshman, he was a rotational lineman and special teamer his first season. Davis would then start his final two years with the Buckeyes that yielded some huge offensive numbers. A first-team All-American as a junior and senior, Davis initially opted out of the shortened year due to the Big 10 delaying its start, but did nothing to hurt his draft stock. Played the two playoff games with an apparent nagging knee injury, left the national championship game in the second quarter with an unsightly injury to his knee. Davis says its not a concern, but everything is a concern when drafting a player. Plays with a lot of power, but small by today’s guard averages.
-OPINION-a two-time All-American shows his ability, but when you need to make sure you hit with a starting offensive lineman, Davis might present too much risk

Sporting News
Kyle Trask 6’5”, 230 pounds, R-Sr, QB, Florida
-FIT-as the potential replacement to Ben Roethlisberger
-BACKGROUND-unlike most HS quarterbacks that play Division-1, Trask sat behind now Miami QB D’Eriq King and played only sparingly, Florida was his only Power 5 offer. Again Trask had to wait his turn, but after injury in 2019 to the starter, Trask came in and threw 25 TD and 2,941 passing yards. That grew to being a Heisman finalist after 4,283 yards, 43 TD, 8 INT, 68.9% completions his senior season. His size immediately compares to Ben Roethlisberger, so does his athleticism and his willingness to spread the ball around. He has a strong, accurate arm, but lacks the mobility of the current star NFL quarterbacks.
-OPINION-judging by his career, Trask is willing to be patient if Roethlisberger would return and willing to battle if he needed to with Mason Rudolph and Dwayne Haskins. Great arm/accuracy, but may not be the best fit for the new NFL quarterback.

247 Sports
Travis Etienne 5’10”, 205 pounds, Sr., RB, Clemson
-FIT-the potential replacement for James Conner and feature tailback
-BACKGROUND-A four-star prospect that picked Clemson over offers from most. He made an impact immediately with 13 touchdowns his freshman season. He made a name as a sophomore, rushing for 1,658 yards and 24 touchdowns during the Tigers national championship season. Etienne would combine for over 2,000 yards and 23 total scores as a junior and 1,500 yards and 16 TD in three fewer games as a senior. Has the ability to make splash plays and an accomplished receiver.
-OPINION-maybe the best tailback in the Draft, but could they find another RB in the second round. Steelers would have to know he’s that much better than later options.

Pro Football Focus
Asante Samuel 5’10”, 184 pounds, Jr, CB, Florida State
-FIT-as a potential decade long starter at corner
-BACKGROUND-Comes from great stock, his father, of the same name played 11 years in the NFL, including 5 with the Patriots with 51 career interceptions. The 4-star recruit had an offer from Alabama, Ohio State and others. Samuel would play in all 31 games with 71 solo tackles, 4 interceptions, 29 passes defended. According to Pro Football Focus, had the 7th best incompletion percentage over last 2 years among NFL prospects.
-OPINION-far greater needs in the first round with a pair of corners already under contract and two desirable defensive backs of your own that become free agents. Then there is the poor history of drafting corners.

NFL.com
Teven Jenkins, 6’6”, 320 pounds, R-Sr., OT, Oklahoma State
-FIT-becomes the new starting left tackle for Alejandro Villanueva
-BACKGROUND-a three-star recruit from Kansas who signed with Oklahoma State already at 6’6”. Jenkins redshirted his freshman year and was the top reserve his first season playing all 12 games with two starts at guard and one at tackle. The following three seasons Jenkins was a full-time starter, playing both left and right tackle. He plays with an edge with a lot of power. Battled injury his senior season and left his final game with a back issue. Opted out of the bowl game for Draft prep.
-OPINION-good chance he could still be available in the second round, might be a reach in the first round.

We will continue to provide updated mock drafts as we get closer to April 29.