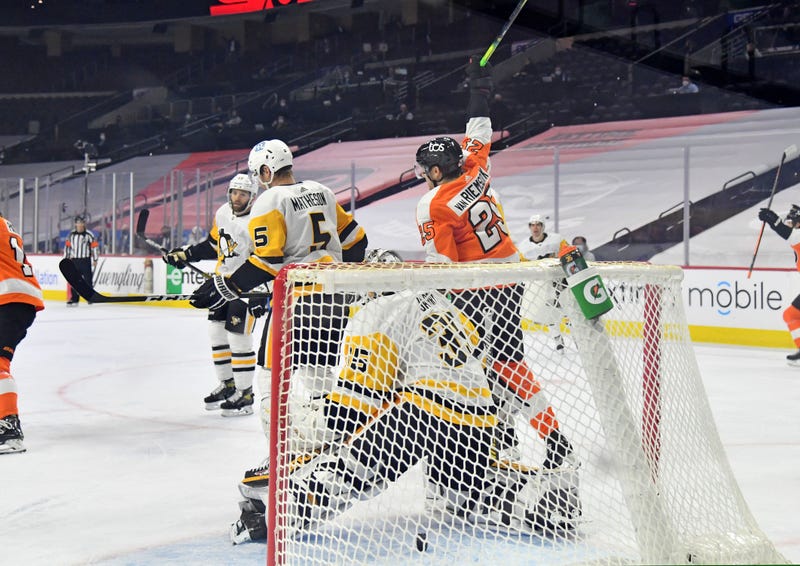 PITTSBURGH (93.7 The Fan) – Pens worked off-ice on Thursday to correct mistakes in the season opener as they play again at Philadelphia at 7p tonight.

“The chances that we gave up were grade-A chances,” said captain Sidney Crosby.  “We didn’t give up a ton, but the ones we did give up were big ones.”

“You are going to make mistakes, but you don’t want to big ones that are grade-A chances like that.  We are just trying to eliminate those and we’ll give ourselves a better chance if we do that.”

“I think as a group we didn’t give up a lot of chances but the ones we gave up were high quality,” head coach Mike Sullivan said echoing his captain.  “You have to give Philadelphia credit they’ve got a really good quick strike offense very much like ours.  They can make you pay for the mistakes you make.”

It’s not that Sullivan expects perfection, but an issue in the 6-3 loss Wednesday was compounding when they screwed up.

“It’s a game of mistakes, usually if one mistake is made teams can recover,” Sullivan said.  “When a mistake is chased with a second or third mistake that’s when it ends up in the back of the net.  I thought there were a few instances where we chased one mistake with a second or third and it ended up in the back of our net.  I believe that is stuff we can control.  A lot of it is attention to detail.”

Now a rematch with the Flyers in this mostly two-game series schedule the NHL put together to keep players as safe as possible during the pandemic.

“It’s fun in that sense,” Crosby said.  “It is like a playoff series.  It’s still fresh in your mind and there are things you can change pretty quick and get ready for the next one.”

Looking for bright spots from Wednesday, it was the play of the new third line of Jared McCann (assist), Mark Jankowski (goal, assist) and Brandon Tanev (goal, assist).

“I thought there performance was really strong,” Sullivan said.  “They were stiff on pucks.  I thought they were physical.  They helped us gain momentum.  They scored a couple of goals.  That’s really what our expectation is of that third line.  They are not going to score two goals every single night when we play, but they certainly are a line that should be hard to play against that brings an offensive threat each and every night.”

Sullivan searched most of last year for this type of third line without finding it.  Small sample size, but good first impression.

“As long as they bring that combination of being tough to play against, being conscientious defensively, helping us gain momentum, being strong on the fore check and presenting that offensive threat each and every night.  That’s really the identity of that third line that we are looking for.”

There are issues with communication with mask wearing on the bench.  However, the eight-year NHL head coach did find a positive.

“I think the referees are probably the happiest guys of anybody on the rink that the coaches have to wear these masks,” Sullivan said.  “Maybe they can ignore some of our banter behind the bench.”

“The referees in our league they take a lot of heat from all of the coaches around the league.  They’re probably the happiest guys that the coaches have to wear masks.”