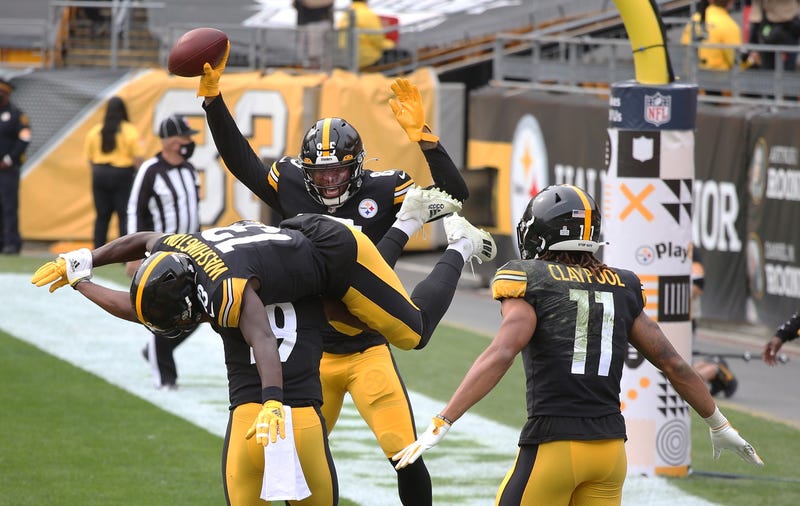 PITTSBURGH (AP) — Not yet Cleveland. At least, not in Pittsburgh.

James Conner ran for 101 yards and a touchdown and the Steelers battered the Browns in a 38-7 blowout victory on Sunday to improve to 5-0 for the first time since 1978. Ben Roethlisberger added 162 yards passing and a score.

The Browns (4-2) were unable to get anything going against a defense that sacked aching Baker Mayfield four times, picked him off twice and chased him late in the third quarter with the game out of reach. The NFL's top rushing offense managed 75 yards on the ground — 113 below its season average — as the Steelers dominated both sides of the line of scrimmage in easily their best performance in 2020.

Safety Minkah Fitzpatrick stepped in front of a Mayfield pass and raced 33 yards to the end zone fors an early 10-0 lead. The Browns, off to the franchise's best start since 1994, never really recovered in a stadium where they haven't won since Mayfield was in elementary school.

Mayfield spent a portion of the week nursing a rib injury but said he was going to be good to go because “mama didn't raise no wuss.” Maybe, but Mayfield stood little chance against Pittsburgh's relentless pressure. His second interception set up Roethlisberger's ridiculously easy 28-yard touchdown throw to James Washington late in the second quarter. That gave the Steelers a 24-0 advantage they never flirted with giving away.

Mayfield finished 10 of 18 for 119 yards and a touchdown to go with the two interceptions. First-year Cleveland coach Kevin Stefanski pulled Mayfield late in the third quarter after a 3-yard touchdown run by Pittsburgh rookie wide receiver Chase Claypool put the Steelers up 31-7.

Cleveland defensive end Myles Garrett predicted a “clean” game in his first action against the Steelers since his ugly fight with quarterback Mason Rudolph last November, a game that ended with Garrett receiving an indefinite suspension after ripping off Rudolph's helmet and then swinging it at him.

Garrett did get his AFC-leading seventh sack with a takedown of Roethlisberger late in the second quarter and play on both sides was decidedly tame. While Rudolph did replace Roethlisberger midway through the fourth quarter, by then Garrett was on the sideline. The two did not appear to interact during the postgame handshake.

The Steelers received a potentially massive blow to their defense when second-year inside linebacker Devin Bush left in the second quarter with a left knee injury. Bush, who had not missed a defensive snap all season, appeared to take an awkward step while attempting to break up a pass.

Browns: will attempt to sweep the season series from in-state rival Cincinnati when they visit the Bengals next Sunday. Cleveland captured the first meeting 35-30 at home on Sept. 17.

Steelers: begin a three-game road swing on Sunday when they visit the Titans. The game was originally scheduled for Oct. 4 before being moved while Tennessee dealt with a COVID-19 outbreak.