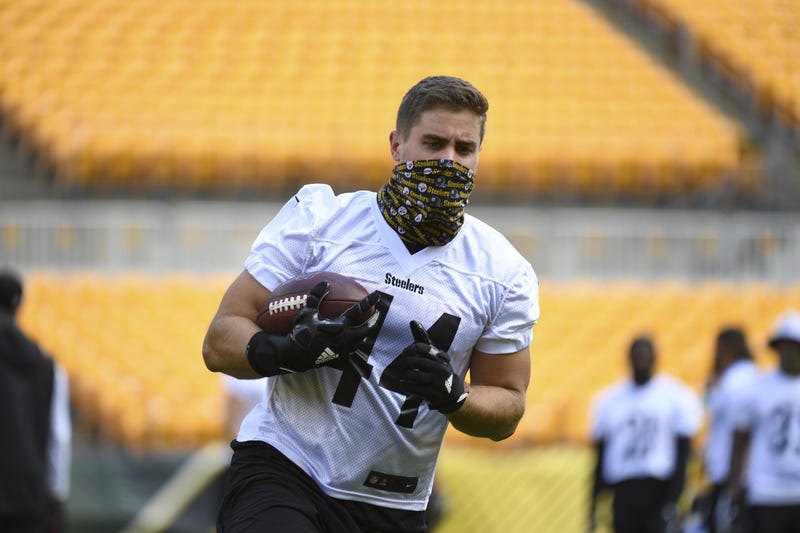 PITTSBURGH (93.7 The Fan) – He signed in the off-season to be the answer for the team at fullback. Derek Watt would take over for Roosevelt Nix and be not only a steady player, but one who could occasionally get the ball.

Injuries have limited Watt to five games and he hasn’t touched the football at all this year and has only four special teams tackles.

Steelers offensive coordinator Randy Fichtner believes Watt started behind the eight ball, due to being hurt, and Sunday against Jacksonville could be the time we see Watt arrive.

“He’s ahead of it now,” Fichtner said Thursday.  “It’s time to figure out how to use him the best.  What can we get out of it?  It’s got to be a part of our football going forward because, if nothing else, it will help potentially the run game and it will help in the play-action game.”

Fichtner had grand plans of bringing back their “tens” formation from 2018 that is run heavy with the ability to throw the football.  It serves not only of trying to give guys a break but to wear the other team down.  They were unable to use it most of last year because Nix was always hurt.

Watt had 10 career rushes and 19 receptions in four years with the Chargers with one touchdown.  However new offensive assistant coach and former Pitt offensive coordinator Matt Canada got a reputation for using the fullback when George Aston accumulated 10 touchdowns in 2016 (5 rush, 5 receiving).  So there was a thought that bringing in Watt for three years at 9.75 million would really help the offense.

“I know that if he had been here healthy through training camp we would have felt better about some of the things live that he would have been able to do,” Fichtner said.  “I think we are still trying to figure that out.”

Rushing for less than 50 yards in each of the last three games, head coach Mike Tomlin said there is urgency to improve the runs game.  It’s an opportunity for the other Watt to contribute.

“I know he’s an intelligent football player,” Fichtner said.  “I know he’s got great will.  I know he really had a good week for Danny (Smith) last week on special teams.  I see it coming and it couldn’t be at a better opportunity or time because it’s time to use him.”