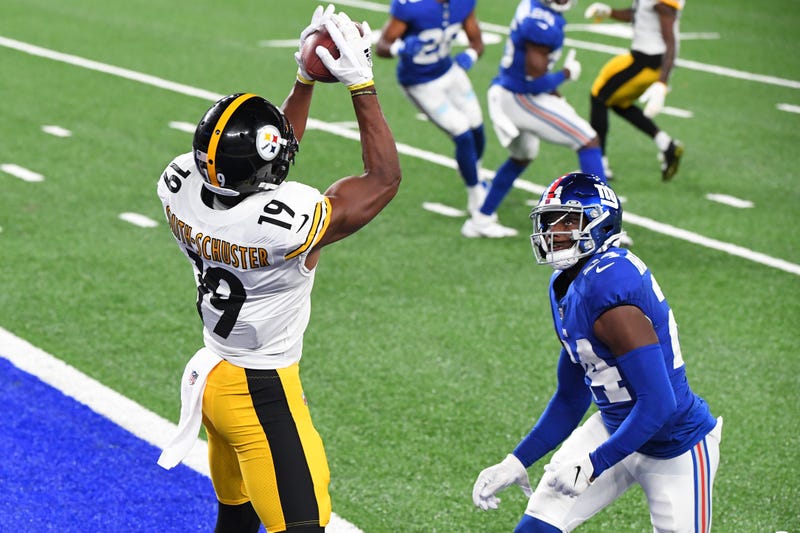 The Steelers kicked of the 2020 season with a 26-16 win against the New York Giants. Mistakes by the Steelers early on gave New York opportunities to take the lead early in the game, but a big take away from T.J. Watt and Ben Roethlisberger shaking off the "rust" led to an easy but at times uncomfortable victory.
Here are takeaways from the game.

Ben and offense have rust but shake it off

Ben Roethlisberger and the Steelers offense looked discombobulated early in the game but as it wore on, Big Ben got comfortable and threw two touchdown passes to JuJu Smith-Schuster who seemed very happy to have #7 back behind center. Benny Snell ran for 113 yards on 19 carries with the longest of 30 to lead the team rushing. Roethlisberger ran three times for 11 yards the second leading rusher, at 38-years-old. JuJu Smith-Schuster and Diontae Johnson each had six reception for 69 and 57 yards respectively.

Defense Picks Up From Last Year

The Steelers defense kept star running back Saquon Barkley at bay with only six yards on 15 attempts. Quarterback Daniel Jones had 22 rushing yards on four attempts. Cam Heyward and T.J. Watt came up big for the defense, getting timely interceptions while the Giants were driving deep into Steeler territory. Bud Dupree played like a man possessed, with tackles out of nowhere and contributing to Heyward's timely intersection. He also recorded his first sac of the year. With Watt expecting a big pay day, it's going to be hard for the Steelers to keep Dupree, but so far he is showing why he deserves a big contract.

The Steelers "Bell Cow" came into the season with a chip on his shoulder to prove he was the team's #1 running back, but in the second quarter, went down with an ankle injury. Injuries have plagued Conner the past few seasons and after only running for nine yards and catching two passes for eight yards, that stigma unfortunately seems to be holding true. Conner looked dejected on the sidelines in the second half, as Snell ran the ball efficiently for Pittsburgh. A fumble by Snell, was recovered by Smith-Schuster in the third quarter.

After some rust, which Roethisberger showed that the old cowboy still has something left. Early in the game, Roethisberger didn't pass much, choosing to hand off the football and when he did pass, he and is receivers were not on the same page. But as the game wore on Big Ben got into a groove and he connected with Smith-Schuster for two TDs and threw another to James Washington who fought his way to the end zone. Roethisberger ended up with 21 completions on 32 attempts for 229 yards in his first game since being hurt 364 days ago.