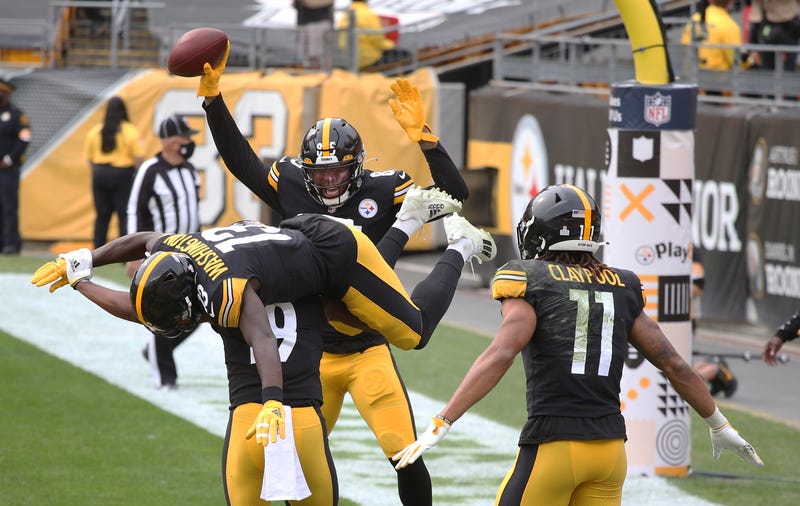 James Washington celebrates a touchdown with his teammates vs. the Browns Photo credit Charles LeClaire-USA TODAY Sports
By Matt Koll

PITTSBURGH (93.7 The Fan)- When you’re playing against a team that hasn’t lost a game yet, you’re looking for any advantage you can get it.

We’re left to look at any and every area and aspect of the game that might make the difference in what should be a tight, 60-minute battle on Sunday in Nashville when the Steelers take on the Titans.

Pittsburgh Post-Gazette Steelers beat writer Ray Fittipaldo joined The Fan Morning Show Wednesday and highlighted what he thinks might be the difference.

“The Titans secondary is good, they’ve been getting turnovers and I think that’s kind of overshadowed their struggles in pass defense. I looked earlier this week, they’re 28th in the league against the pass. Mike Tomlin had a good way to describe them yesterday, they have a big appetite for the big moment. It basically means they’re very good at coming up with timely turnovers.

Teams have gotten a lot of yardage on them, they’re kind of a bend but don’t break defense. I don’t think this is a game where Ben and the offense is going to struggle to move the ball down the field. I think this might be a big game for the Steelers in the redzone.

“You know the Titans can score, they’re probably going to score their fair share of points against the Steelers defense on their home field. When the Steelers get down there this week, they’ve got to convert into touchdowns. They did a great job of that last week other than that first drive where they settled for a field goal, they were scoring touchdowns. That redzone offense once again this week has to be on point.

On the other side of the ball, Ray warns that Robert Spillane, likely to be the primary fill-in for Devin Bush, may run into some issues.

“They do have to worry about him getting in mismatches just like they had to worry about Vince Williams getting in the mismatches a couple years ago. Robert Spillane is very similar in that regard. Vince was a sixth round pick, Spillane was an undrafted free agent. I think both of those guys are in the 4.7 (40 yard dash time) range.