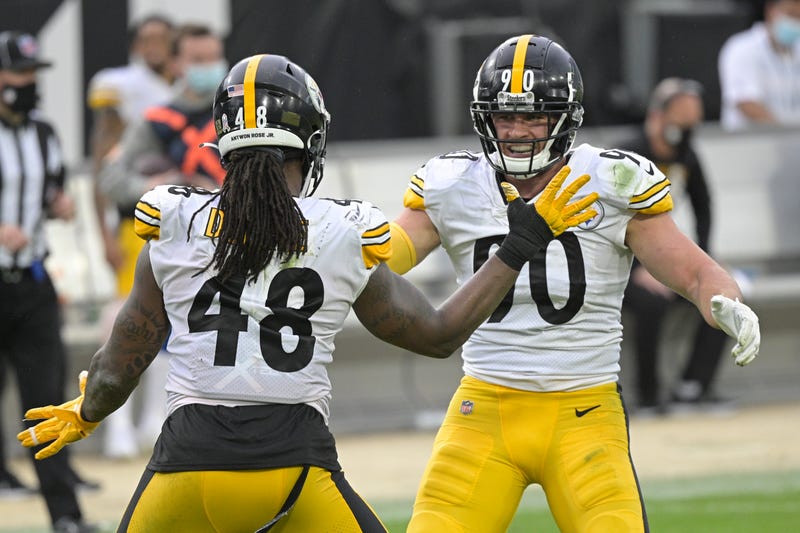 It pulses every time the NFL's reigning Most Valuable Player has the ball in his hands, a kinetic energy fueled by the Baltimore quarterback's unique skillset, one most teams in the league have struggled to grasp let alone stop.

Yet something happens when Jackson faces the Pittsburgh Steelers. The electricity that comes so easily against others vanishes. Jackson's surehandedness too. He gave it away three times in Pittsburgh last season as Baltimore relied on the defense and Justin Tucker's ever-reliable right leg to survive in overtime.

Earlier this month, Jackson directed an offense that piled up 457 yards. He also threw a pick-6 on Baltimore's first possession, lobbed an ill-advised interception to start the second half that sparked Pittsburgh's comeback from a 10-point deficit and fumbled twice in the red zone as the Steelers grabbed hold of the AFC North with a 28-24 victory.

Pittsburgh rookie linebacker Alex Highsmith — whose leaping pick after dropping into coverage gave the Steelers the jolt they needed — raises eyebrows afterward when he hinted Pittsburgh knew what was coming. A comment Highsmith's mentor, perennial Pro Bowler T.J. Watt, jokingly bristled at as the rematch looms on Thanksgiving

“I’m going to have to talk to Alex about giving the media all his tips,” Watt said Tuesday. "It’s unacceptable.”

Jackson has handled the ball either running or passing 95 times in two career games against the Steelers. Seven times those touches have ended with the ball in the hands of someone wearing black and gold. Jackson has 17 turnovers in 1,273 touches against everyone else.

Still, defensive coordinator Keith Butler insists his unit hasn't somehow figured out Jackson, even throwing out one of his favorite modifiers that betrays his southern heritage as proof.

“No, we don’t have his number,” Butler said. “Daggum, the kid is a great football player. He was MVP last year. I don’t think anybody has his number.”

Butler pointed out the Steelers still gave up 457 yards to the Ravens in their first match of the season. True, but the NFL's only unbeaten team (10-0) forced Jackson into the kind of careless mistakes he typically avoids.

His second pass of the game went right to Pittsburgh linebacker Robert Spillane, who sprinted 33 yards to the end zone.

Late in the first quarter, the Ravens had the ball deep in Steelers territory with a chance to take the lead. Jackson stepped up in the pocket hoping to avoid pressure and instead saw the ball pop free after getting hit by Pittsburgh linebacker Bud Dupree. It rolled into the waiting arms of Steelers linebacker Vince Williams to end the threat.

Trailing by four late in the fourth quarter, Jackson tucked and ran on fourth-and-3 from the Pittsburgh 8. He found himself hemmed in short of the line to gain and when he stretched the ball out in a futile attempt to get a first down, it squirted loose and the Steelers eventually held on.

“You’ve got to put him in situations that he’s uncomfortable,” defensive tackle Cam Heyward said. "Whether it’s pressure, putting him behind the sticks ... (but) it’s not indicative of the way the game is going to go this time.”

It can't be if the Ravens (6-4) want to revive their season. Baltimore has dropped three of four and is dealing with a significant COVID-19 outbreak. Running backs Mark Ingram and J.K. Dobbins are out after testing positive. While Gus Edwards is still available — at least as of Tuesday night — fewer playmakers at his disposal likely means Jackson will have the ball in his hands even more than usual.

Yet even with the Ravens short-handed, the Steelers remain wary.

“It’s not like we are laying off the gas pedal by any stretch,” Watt said. “You look at the last game, they ran for 200-some yards on us ... a lot of the downhill runs weren’t acceptable. We watched the film and weren’t happy with how we played from that perspective.”

They were only truly happy with the result, typical of a defense that is just fourth in yards allowed but first in sacks, takeaways and points against. You can push them around a little bit. Just don't expect them to break. They have dynamic edge rushers, a stout presence up the middle of the defensive line and playmakers in the back end.

Jackson is dangerous because he can make a play at any level with either his arms or his legs. Pittsburgh, perhaps as much as any team, has the talent and the experience to provide an answer at everywhere he turns.

“We’ve been playing together (for a while) and are very comfortable with each other,” said defensive end Stephon Tuitt, who sacked Jackson twice back on Nov. 1.

"We know how we play and we capitalize off each other, from the rush to the defensive backs to making great stops on great receivers.”

Yet the Steelers remain wary. Their performance against Jackson has been the exception, not the rule. They're well aware they're just one snap away from becoming fodder for his burgeoning highlight reel.

“He somehow finds ways to escape,” Watt said. "We understand he’s an MVP-caliber player ... We have to make sure the plays when he does get out, they don’t break us.”