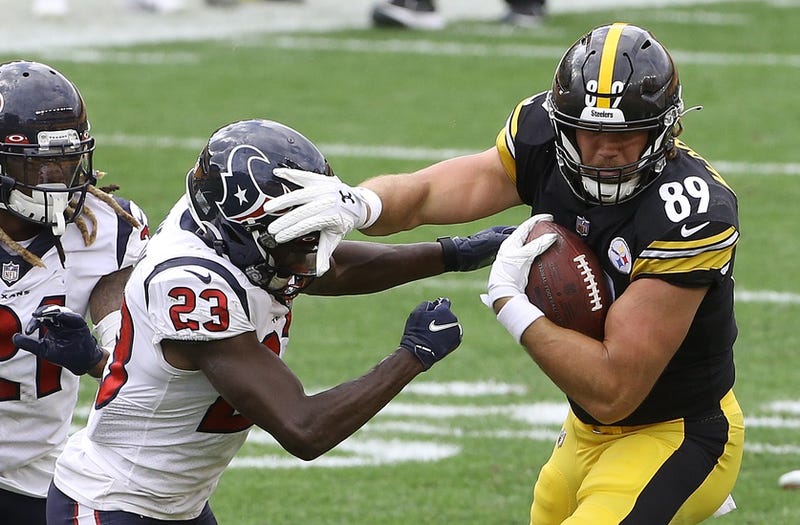 PITTSBURGH (93.7 The Fan) – It would have been a sin in the Super Bowl days of the 1970s to even think of throwing on third and short and if you need it on fourth and short, there would be a rash of foot injuries from fans kicking their TV consoles if you threw.

It’s a different time now, not only would it be tougher to kick the TV hanging over the mantle, but it’s about passing now in the NFL.  Five times during the Steelers win over the Texans on Sunday, the Steelers were successful throwing on third or fourth down and less than three yards.

Twice the Texans interfered giving the Steelers a first down, JuJu Smith-Schuster caught a six yard pass, Vance McDonald a 14 yarder and James Washington for 7 yards on 4th and 1.

“We did supplement the run with some quick RPO (run pass option) passing game that allowed us to sustain drives and possess the ball,” said head coach Mike Tomlin.

So it wasn’t as much of trying to following the passing game trend as it was adjusting to how Houston was defending.

“They were going open field, goal line defense,” Tomlin said.  “You can’t run the ball into that.”

“We trust Ben.  We trust our run game.  We’re not going to allow people to cheat to that extent where they got a goal line defense in open grass.  We’ll do what we got to do to win the down.”

Quarterback Ben Roethlisberger said the two-point conversion is another example of a RPO, as it doesn’t fall in the third or fourth down category, it is a make-or-break play.

“There is a pre-snap read element to it, but a lot has to happen after the snap,” Roethlisberger said.  “Does a guy slide?  Sometime I will predetermine.”

“There is some taking a chance, sometimes I don’t make the right read or right decision or it doesn’t work out the way you want it to.  As long as we are making more of them than we don’t.  I think it’s good.”

It’s part of the options Tomlin has now with a veteran quarterback, and with Roethlisberger back this Steelers team is off to its best start in a decade at 3-0.

“There’s no fans here, but we still want to win at home,” Roethlisberger said.  “We want to win it for the fans watching around the world.  For us to get off to a good start like this is important and it’s fun.”