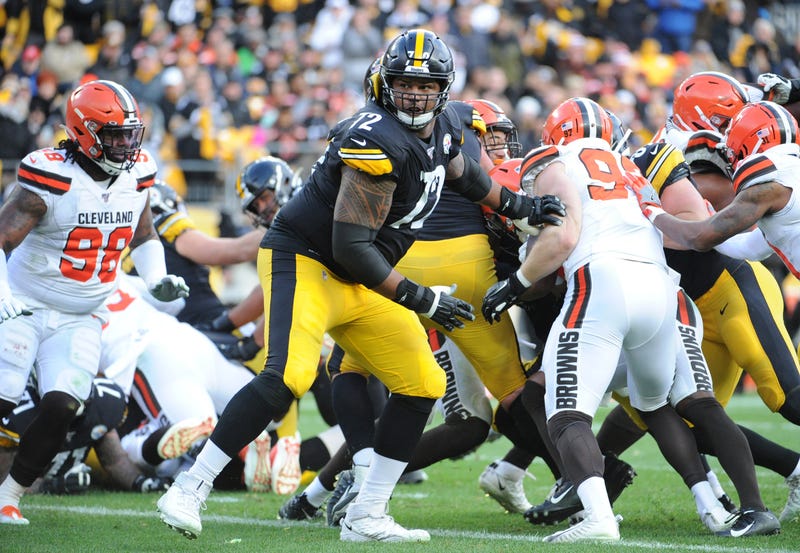 PITTSBURGH (93.7 The Fan)- After three years in the league, Zach Banner has been named a starting offensive lineman for the first time in his career.

He’ll get the nod at right tackle for Mike Tomlin and the Steelers when they head to New Jersey to take on the Giants Monday night.

Banner explained to The Fan Morning Show Friday how things have changed, yet remained the same since the official announcement that he had won the job.

“I think it’s two different kind of mindsets, right? But still the same grind if that makes sense. The first mindset initially is earning it. It’s taken me a couple years to do something like that and be considered and also to be given the opportunity. It’s a blessing, I’m excited.

Then the second thing is, now you’ve got to keep it. Go out there Monday night and you mess up, you’re done. So it’s just one of those types of things where the mindset is, ‘What is important today?’ I’m focused on Friday. Yesterday I was focused on Thursday.

That was some of the advice that I got from Coach T (Tomlin), from some of the older guys. One of my close friends on the team, I think he’s in his seventh or eighth year, is Matt Feiler. I asked him, I said, ‘Hey, when do the butterflies go away?’ He said, ‘After the first snap.’ So, I’m excited about that.”

Banner realizes the importance of who he’s protecting as well. Not just that Ben Roethlisberger is a future Hall of Fame quarterback, but also that he’s coming off major surgery and is now 38 years old.

“Yeah, you know, it’s a lot of pressure. But Ben is very supportive of me. He comes into this building every day with the mentality of winning. He’s not only passionate, but also a cool dude. A really cool dude, actually.

When you feel his support, when you hear him in the huddle like, ‘Here we go, guys. Let’s go. Let’s go 7-2.’ It’s pretty inspiring. Especially since I was, what, in elementary school, middle school, watching this dude play in big games and on the big stage. So it’s an opportunity, it’s a blessing. But it can be short-lived if you don’t do it right.”

Not only has he had a front row seat to watching Ben Roethlisberger go to work, but he’s also had that same seat to watch the Steelers defense prepare for the season in training camp. If Banner’s observations are any indication, that unit is primed for another big year. In fact, they’ll be even better.

“From a front seven standpoint, they’re talking less (than last year) because they can read each other’s minds and signaling each other and it’s almost like they’re all on the same mental note, which makes it harder. It’s just common sense, when you go against somebody every day and you hear the same calls, you’re like, ‘Ok, they’re going to do this.’ You try not to cheat, you try to make it reactionary, but we’re all competitive and they do the same thing with us.

But it’s crazy because this year I just feel like they’ve had their experience last year playing with each other and then, not only the front seven, but also that back four behind them. It makes it a lot easier for them to play free and have fun. It just seems like they’ve had a lot fun over the course of training camp.”

Although he loves the support he’s gotten from Ben, he couldn’t leave without taking a dig at him. In reacting to the video the Steelers posted that featured Roethlisberger running up the bleachers at Heinz Field: “I honestly want to say Ben ran up one flight of stairs and they said, ‘OK one take and one take only.’ He’s probably going to get on me when he hears about this but I don’t know what we’re promoting, if we’re selling like middle-aged dad gear or something like that but that’s what it looked like. I felt like I was watching a video of like Will Ferrell training.”