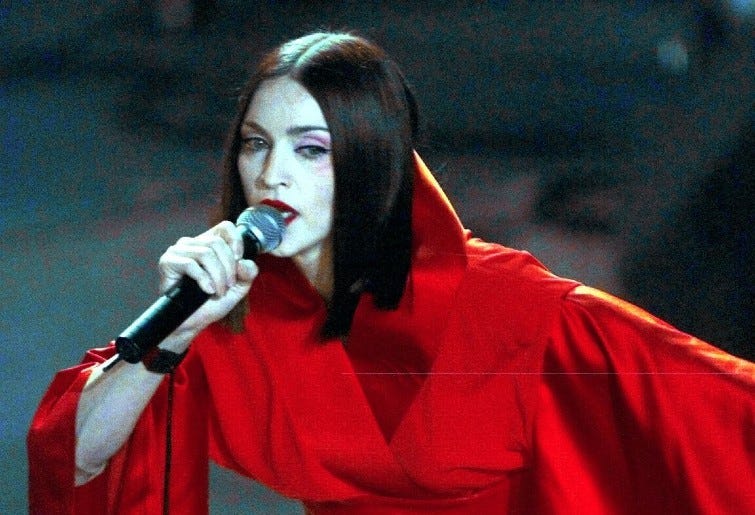 If you had the job of directing the story of Madonna's life, I have a feeling she'd be giving you a lot of input during the creative process. So it probably keeps things simpler if Madonna just calls the shots herself.

The singer is going to co-write (with Diablo Cody, who won an Oscar for writing the film Juno) the movie story of her own life, and while she's at it, she's going to direct it, too.
The Hollywood Reporter quotes Madonna as saying, “I want to convey the incredible journey that life has taken me on as an artist, a musician, a dancer – a human being, trying to make her way in this world. The focus of this film will always be music.  Music has kept me going and art has kept me alive.  There are so many untold and inspiring stories and who better to tell it than me.  It’s essential to share the roller coaster ride of my life with my voice and vision.”
Madonna does have some film experience after acting in Desperately Seeking Susan, Dick Tracy, A League of Their Own and Evita. She directed a period drama called W.E. in 2011. And then there was the documentary Madonna: Truth Or Dare from 1991. The best part of that was watching her then-boyfriend Warren Beatty get more and more impatient with the cameras invading their private lives together. Not a great film, but fun to watch those little personal moments.
The story in the Hollywood Reporter points out that while celebs are often involved behind the scenes in their own biopics (as Elton John was with Rocketman) they rarely take the reins to write or direct those kinds of films themselves.

But hey, Madonna is one of a kind, and she obviously has her own creative vision for this project.

Nobody's speculating on a release date, but this will be fun to watch.