The big D-O-Double-G wants you to get out, vote, and drop that ballot off like it's hot. Snoop Dogg has handed over his classic “Drop It Like It’s Hot” to the Democratic National Committee to be used for a new vote-by-mail ad campaign.

With special ballot drop boxes placed in some parts of the U.S. the DNC is encouraging voters to use the dropbox system in order to vote early, safely, and simply.

In a press release, Snoop shared, “this is the most important election of our lifetimes and it’s my first time voting. We need every single American to get out there and vote. It’s time for y’all to drop those ballots like they’re hot — in your local dropbox. Vote early and let ‘em know our voices will be heard!”

In June, the rapper shared that his vote in the 2020 election would be his very first time voting. Snoop has been consistently vocal about voting Donald Trump out of office.

“I ain’t never voted a day in my life, but this year I think I’ma get out and vote because I can’t stand to see this punk in office one more year," the Doggfather shared. "For many years, they had me brainwashed thinking that you couldn’t vote ’cause you had a criminal record. I didn’t know that. My record’s been expunged, so now I can vote.”

In September Snoop partnered with Rock The Vote and 1 Vote Closer to create the #VoteWithSnoop voter registration awareness campaign. 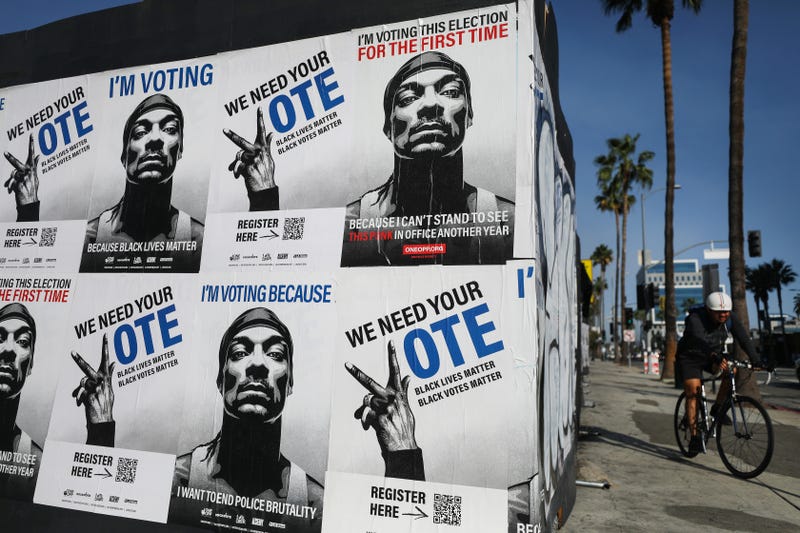 Find out if you can access a ballot dropbox in your city or create your best voting plan here.

news
Shop these 5 women-owned businesses on Amazon for International Women's Day
music
Rita Wilson 'grateful' for her health one year after she and husband Tom Hanks were diagnosed with COVID
music
Vote on the 'Top 7 @ 7' songs with Rob + Holly
music
Miranda Lambert kicks off International Women's Day celebrating some of her own 'leading ladies'
music
Listen to the Superstar Power Hour with Hillary Scott
music
RADIO.COM's Alternalido playlist for March 7 ft. Cultura Profetica, Black Pumas, and Edwin Bonilla