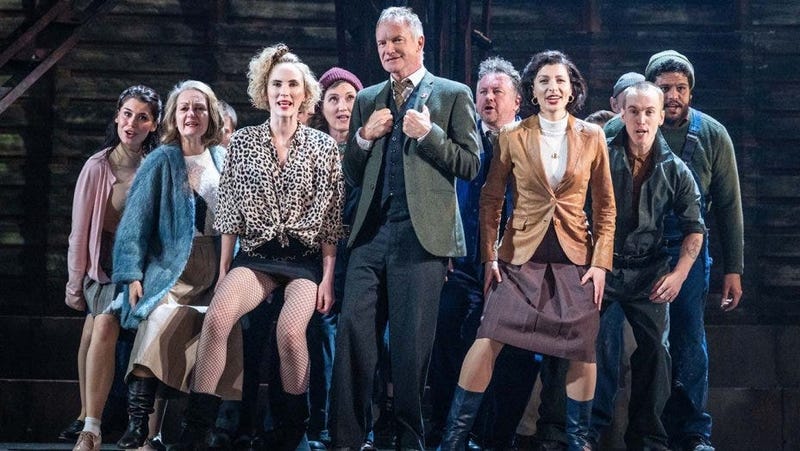 By Deborah Howell 94.7 The WAVE

I fell madly in love with Sting’s first solo album “The Dream Of The Blue Turtles” when it was released in 1985. The remarkable singles “If You Love Somebody Set Them Free”, “Fortress Around Your Heart”, “Russians”, and “Love Is The Seventh Wave” took my breath away. Rarely had I heard an artist pair such powerful lyrics with such exquisite melodies, and those gritty-sweet vocals were the icing on the cake.

Fast-forward to 2020. As I was watching Sting’s “The Last Ship” at the Ahmanson Theatre on its American tour opening night (mere feet away from Al Pacino and Trudy Styler) I felt the magic of those older songs float through my consciousness as the story unfolded.

This musical is Sting’s dream come to life;  an endeavor he’s long wanted to bring to fruition, and that was apparent in every scene and every song. Sting himself is a central character in the piece, playing shipyard foreman Jackie White whose days of ship-building are coming to an end-- as is his life-- just as his men need his leadership the most. Once you get past the shock of seeing Sting in a 3-piece suit, you can settle in for a night of all-original Sting tunes, a poignant story, and some sensational vocalizing.

The Last Ship is inspired by Sting’s own childhood in Wallsend, North East England, in the era of industrial decline, where a single shipyard would often support an entire town.  Indeed, the loss of a shipyard could be a town’s death-knell. Such is the case in this town in 1986, as Margaret Thatcher exercised total control over the unions and global competition was pricing out the more expensive, old-fashioned ways of building ships.

As the union builders and their families fight to save their shipyard and their livelihood, sailor Gideon (Oliver Savile) returns home after17 years to find that the local shipyard is closing and that his teenage sweetheart and mother of his child, Meg (Frances McNamee) has no interest in rekindling their romance.Their formidable voices entwine gorgeously and provide the night’s most memorable moments, most notably during the breathtaking “When the Pugilist Learned to Dance”.

The couple’s teenage daughter Ellen, played with fire and ferocity by Sophie Reid, more than holds her own in her triumphant anthem “All This Time”  as she discovers the truth about her own identity. Absolutely soul-stirring. The climax of the piece occurs when the thousands of women of Wallsend form a human circle around the shipyard in a brave attempt to stave off a violent takeover. The production has been called personal, political, and passionate. I’d agree, but also add empowering.  It’s a living anthem to the everyman trying to hold down, with dignity, his or her own piece of ground.

sports
Sandy Alderson: Mets 'shocked' by Jared Porter news when first learning of it Monday night
sports
Tiger Woods undergoes back surgery, 2021 season on hold
sports
Mets consulted with zero women before hiring of Jared Porter
sports
Hall of Fame pitcher Don Sutton dies at 75
sports
Eagles wanted to interview Brian Daboll; he wouldn't until after season
news
Trump's farewell speech: 'We restored the idea that in America, no one is forgotten' [VIDEO]