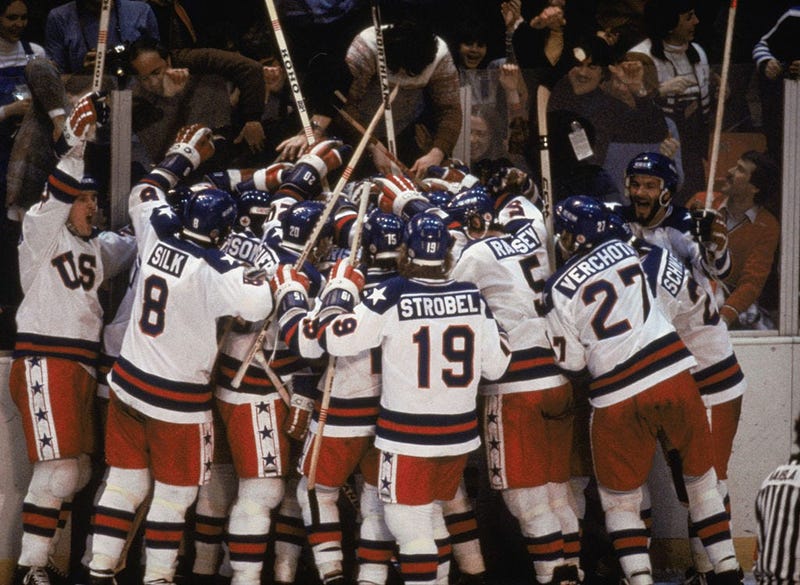 With everyone suddenly having plenty of time to spend in the house, we asked the 94WIP staff to recommend their favorite sports movie.

My weekend radio partner Glen Macnow was the one who suggested a book on sports movies. I wish I could take the credit, but I can't. It was his idea and like most of Glen's ideas, it was a good one.

The Ultimate Book of Sports Movies was published by Running Press in 2009 but we still get calls about it when we're on the air together. People love to discuss -- and debate -- sports movies. So with everyone looking for things to do, here is my list of sports movies that will pass the time and lift your spirits:
Best Sports Movie: Rocky (1976)

I know, it overstayed its welcome. Rocky IV was ridiculous and Rocky V was abysmal (aside from Stan Hochman's brilliant cameo) but the original film was wonderful, a worthy choice for the Oscar as best picture. Sports movies have worked and re-worked the underdog theme for years but no one did it better than Sylvester Stallone in his tale of a blue-collar pug who wants to show the world (and the women he loves) he ain't just another bum from the neighborhood.

The first time I saw the film I was in Augusta, Ga., covering the Masters. It was so weird to watch a movie that was so Philadelphia in a theater far from home surrounded by people who had never seen the Italian Market or the Art Museum steps. But when Rocky and Apollo were slugging it out in Round 15, they were on their feet cheering. So was I.

Just to be clear: This is the original, not the Adam Sandler remake. Burt Reynolds is in peak form as Paul Crewe, the former NFL star who drives his girl friend's Maserati into a lake and winds up in a Florida prison. Crewe is an abusive, selfish lout with no sense of decency but when he quarterbacks a team of fellow cons in a game against the prison guards (with Ray Nitschke at middle linebacker) we're cheering him on.

Reynolds played football at Florida State and he flashes some of his old moves in the big game. Director Robert Aldrich, who told a similar convicts-as-heroes tale in The Dirty Dozen, does a superb job bringing the story to life. Look for the NFL players (Mike Henry, Joe Kapp, Ernie Wheelwright, Nitschke) in supporting roles.

Best Sports Documentary: When We Were Kings (1996)

A splendid piece of work by filmmaker Leon Gast capturing every aspect of The Rumble in the Jungle, Muhammad Ali's stunning upset of George Foreman in Zaire. It is clear in the film that even those in Ali's inner circle felt the 32-year-old former champion would lose to Foreman. Yet Ali shocks the world by introducing us to the Rope-a-Dope as the crowd chants his name.

The film earned the top prize at the Sundance Film Festival and won the Oscar for Best Documentary. It took Gast 22 years to edit his 300,000 feet of film down to his 90-minute masterpiece but it was well worth it.

I could have gone with Caddyshack (you can never go wrong with Bill Murray and Rodney Dangerfield) but I have to give the edge to Slapshot, a nutty and absolutely hilarious send up of minor league hockey shot on location in Johnstown, Pa. Paul Newman, one of the great actors of his generation, said he never had more fun than he did playing Reggie Dunlop, the has-been player coach of the Charlestown Chiefs.

The movie came out during the Broad Street Bullies days so it has special meaning to the hockey fans of Philadelphia. The most amazing thing about the film is it was written by a woman, Nancy Dowd, who later won an Oscar for writing the script for the Jane Fonda-Jon Voight film "Coming Home." Her brother, a hockey player, has a cameo as Oglethorpe, a hockey goon.

This film came and went in a hurry which is too bad because it is worth seeing, especially if you are a baseball fan. It is the story of a talented teenager from the Dominican Republic who is signed to a professional baseball contract and comes to America to pursue his dreams. It is a fine study of the challenge these young players face, moving to a strange place -- he is sent to Iowa where he lives with a white family -- where they can't speak the language and don't understand the culture.

Example: The first English words Miguel "Sugar" Santos learns are "French toast" so that's what he orders for every meal. It makes the point that it is a hard climb for all these Latin players who aspire to be the next Juan Marichael or Robby Cano.

Glen Macnow: Hey, everyone could use something to lift their spirits now. And most sports movies fit that bill. My goal here is to give you a few uplifting movies that you probably haven't seen as often as "Rocky" or "Hoosiers."

Here are five underrated sports that show heroes overcoming adversity. Added plus -- they're all good movies to watch with kids (at least older kids), and I imagine your children are probably going crazy about now:

* Seabiscuit (2003). The true tale of the hold that a boxy, undersized bow-legged five-year-old had on America in the 1930s. This is an underdog story of how a broken-down horse helped save the broken-down men around him (played by Jeff Bridges, Tobey Maguire and Chris Cooper). Added trivia: It's Cole Hamels's all-time favorite sports movie.
* Cinderella Man (2005) The perfect movie for right now. As the country goes through the Great Depression, a tomato can prizefighter, James J. Braddock (played by Russell Crowe), ends up fighting for the heavyweight champion -- and wins. Kind of like Rocky -- if Stallone's story was true. Directed by Ron Howard.
* The Greatest Game Ever Played (2005). Imagine that the local country club amatueur champion went up against Tiger Woods in the US Open -- and beat him. That's the unbelievable setup here, except that it's true. Well, not Woods, but the Tiger of the 1910s, Harry Vardon, who was beaten by a 20-year-old former caddie.
* Breaking Away (1979). The oldest movie on this list, but it holds up. The story of four bored, working class 19-year-olds in Indiana who find salvation through bike racing. The rare coming-of-age film that's not about losing your virginity or getting so drunk you barf in the backyard pool. Introduced Dennis Quaid, Dennis Christoper and Daniel Stern.
* Miracle (2004). If you want to feel positive about people in this country, watch this one. A very accurate telling of the 1980 US Olympic Miracle on Ice. Two things to know: 1) The directors smartly hired hockey players, rather than actors, for most roles, so the sports action is terrific. 2) Real coach Herb Brooks gave actor Kirk Russell his actual notes from the famous speech he gave his team before the game against the Soviets. The result is the best two-minute speech in sports movie history.
Rhea Hughes: Seabiscuit, Moneyball, Blind Side

I read all of those books, so maybe I like them more. Seabiscuit my all-time favorite book. I always enjoy the line in the beginning of The Blind Side. The monologue with Sandra Bullock — “As every housewife knows, the first check you make is to the mortgage company, the second check is to the insurance company (referring to the left tackle)”. I’m not exactly sure why I like Moneyball except for the fact that his daughter sings a song by Lenka. My son used to make me sing it for him. I can’t sing at all so that always makes me laugh.

Hoop Dreams - Truly more than a documentary. If you are a sports fan, this is a must watch.
Bull Durham - Wedding gift scene on the mound is just the best. “Well Candlesticks always make a nice gift.”
Remember The Titans - “Now that’s a momma joke!” Love that scene.
The Rookie - As Disney as Disney can be. But if I’m flipping around on TV and it’s on, I get sucked in every time.
Slap Shot - I remember watching this movie with my brother when it first came out. He looked like one of the Hanson brothers. Just love the whole chaos of it.
A League Of Their Own - Absolute classic. My favorite part of movie might be at the end with the actual members playing while the credits roll. I love that part of the movie.
The Replacements - Campiness at its absolute finest. You want to amuse yourself for a couple hours and laugh at the silliest of things, this is your movie.  “He’s wiry!!”…Love Rhys Ifans as Nigel “The Leg” Gruff.
Angelo Cataldi: Hoosiers, Rocky, Everybody’s All American, Raging Bull and The Natural.
Al Morganti: Slap Shot, Phar Lap, Bull Durham, Miracle, A League of Their Own, Rocky,  Raging Bull, The Fighter, Mystery Alaska, Caddyshack
Joe DeCamera: The Natural
Jon Ritchie: Baseketball
James Seltzer: Major League
Ike Reese: Hoop Dreams
Jon Marks: Caddyshack
Jack Fritz: Sandlot
Joe Giglio: Any Given Sunday
Spike Eskin: Varsity Blues
Andrew Porter: Cinderella Man
Eliot Shorr-Parks: Remember The Titans