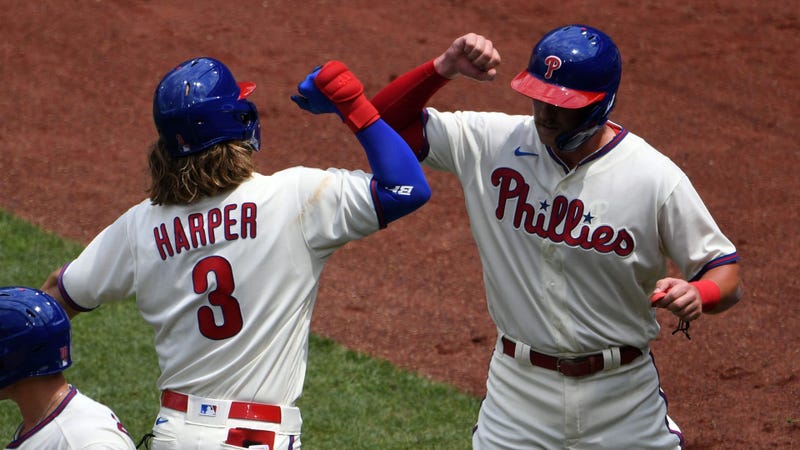 The Phillies will be returning to action on Saturday when they take on the Toronto Blue Jays for a double-header, then play a single game vs. Toronto on Sunday, according to a report from The Athletic.

Assuming the report is correct, it means the Phillies entire series against the New York Yankees will have been postponed. It is unclear when (or if) those games will be made up.

The Phillies have been sidelined since Monday after an outbreak of COVID-19 was discovered on the Miami Marlins.

The good news is, according to multiple reports, Phillies players and coaching staff have now completed two rounds of COVID-19 testing with zero positive tests.

The issues started when the Marlins played the Phillies on Sunday night, and both teams were aware that four Marlins players tested positive. Marlins manager Don Mattingly said his team “never really considered not playing.”

NBCSportsPhiladelphia's Jim Salisbury was on with Angelo Cataldi and the Morning Team when news broke about the Marlins outbreak on Monday morning. He was asked if the Marlins can continue their season this year:

"I don't know," said Salisbury, "They have these 60-man player pools but they just lost, what, eight big leaguers?"

"They were in the Phillies home ballpark. Guys were taking leads off of first base, Rhys Hoskins was holding them on. Bryce Harper, who has not been a mask-wearer, donned a mask while leading off first base yesterday. The Phillies received a group text message in the morning to the effect that we are hearing things on the other side, there might be some problems over there so please take your precautions. I don't know what is going to happen. This is going to be a very watershed day in this whole COVID/baseball experience."

Matt Gelb reported that the Phillies are quarantining their visiting clubhouse staff members in an effort to keep safe. The Yankees, who arrived in Philadelphia on Sunday night for Monday's game, brought along their own clubhouse staff. Reports ​have indicated the Phillies clubhouse was "disinfected" following the Marlins departure.