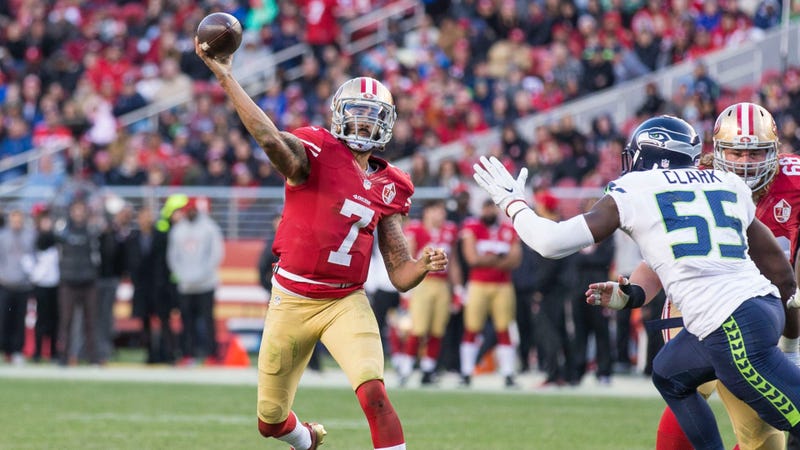 The first name that popped into the head of many Eagles’s fans was the same one that has been mentioned, but ultimately not selected, by almost every quarterback-needy fanbase over the last two seasons.

The question now is whether the Eagles will finally be the team that signs Colin Kaepernick.

The possibility is there after the team lost backup quarterback Nate Sudfeld to a broken wrist on Thursday night in their preseason loss to the Tennessee Titans, an injury that will require surgery and could sideline him well into the regular season. Head coach Doug Pederson said after the game that the team won’t be signing a new quarterback to backup Carson Wentz, but considering how poorly both Cody Kessler and Clayton Thorson played in their preseason debuts, it is easy to see that changing.

Whether the team ultimately lands on Kaepernick, however, is a complicated question that will be viewed from many angles by the organization.

Here are some thoughts on the idea of Kaepernick coming to the Eagles:

Talented: It is impossible to discuss Kaepernick without talking about how he has been essentially banned from the NFL due to his decision to protest during the national anthem, but let’s start by looking at Kaepernick strictly as a football player. Kaepernick is without question the most talented quarterback left on the open market, with 70 career passing touchdowns to just 30 interceptions. He is also a dynamic threat in the running game, with 2,300 yards and 13 rushing touchdowns on the ground in five seasons playing for San Francisco 49ers. It isn’t hard to imagine head coach Doug Pederson being very creative (and successful) with how he would use Kaepernick should Carson Wentz go down, especially considering the weapons and speed Kaepernick would have around him.

Although his career completion percentage of 59.8% isn’t ideal, no quarterback the team signs at this point is going to be perfect. Kaepernick has the best combination of skill and experience on the open market, and there might not even be a close second.

Rust: As talented as Kaepernick is, it is hard to look past the fact he has not played in the NFL since 2016. That is a long time to be away from the game, especially when you consider how close it already is to the start of the upcoming season. Kaepernick also didn’t leave the NFL on the highest of notes, going 3-16 in his final 19 starts with arguably the two worst seasons of his career. Kaepernick has made it clear on social media he feels ready to go, but the rust factor is a very real one when it comes to the idea of bringing him in and hoping he can be ready to backup Wentz in Week 1.
Distraction: Whether you agree with Kaepernick’s political views or his decision to peacefully protest during the national anthem is not really relevant to whether the Eagles’ would bring him in. Lots of people agree and support Kaepernick and lots of people don’t. Some people would love the decision and some would hate it. What can’t be denied, however, is the media circus that would follow Kaepernick to whatever team decides to sign him. Kaepernick coming to the Eagles would be a national story that would be discussed by more than just sports fans. His first practice would be covered by news outlets around the country. It is also safe to say President Donald Trump would give his opinion on the news. Kaepernick might not be a distraction inside the locker room with the players, but he would instantly become one of the most talked about players on both the team and in the league — which is not a quality any team wants in their backup quarterback.
Wentz: The Eagles do not want to sign a backup that would in anyway put any kind of pressure on Wentz. If they were willing to do that they would have payed to keep Nick Foles. In an ideal world for the Eagles, Wentz comes out next season, plays great and the team gets off to a hot start. In a world where he doesn’t, however, the last thing the Eagles need is the idea growing amongst the fans that they should bring in Kaepernick. Fans wouldn’t be calling for Sam Bradford, Josh McCown or Brock Osweiler. They might call for Kaepernick.
Lurie: Ultimately the decision to bring in Kaepernick would fall on the shoulders of owner Jeffrey Lurie. Lurie has the kind of track record that makes you think he might do it, considering his willingness to allow his players to speak their mind on political issues, his support for safety Malcolm Jenkins in the past and a willingness to bring in players other teams wouldn’t. You have to wonder if Lurie might like the idea of being the owner that signed Kaepernick, a move that might ultimately put him on the right side of history when Kapernick’s story is told years from now. Some (most) teams wouldn’t even considering bringing in Kaepernick. Lurie’s team shouldn’t be considered one of them.
Chances: The chances of the Eagles brining in Kaepernick have to be considered extremely slim. They have had a chance to add Kaepernick before, like in 2017 when Carson Wentz went down and Sudfeld become the top backup to Nick Foles. They passed then and they will likely pass now. That won't stop fans from around the league, however, from talking about it and wondering if this could finally be the moment Kaepernick is brought back into the NFL.
You can follow Eliot Shorr-Parks on Twitter at @EliotShorrParks or email him at esp@94wip.com!