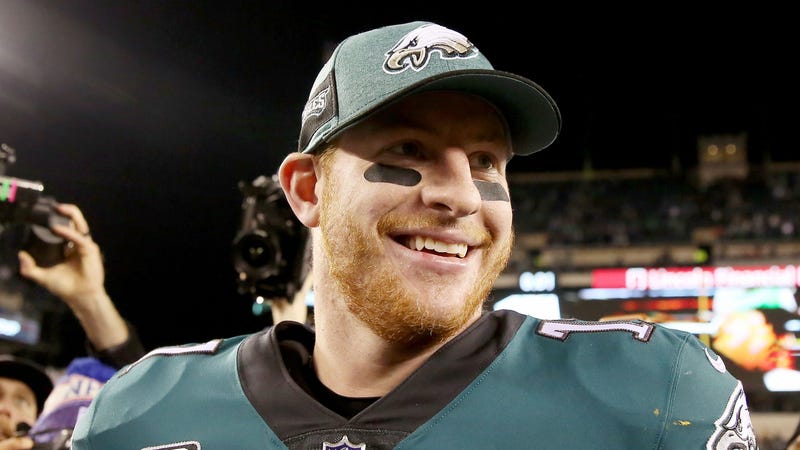 The last time the Eagles won a Super Bowl, the quarterback they just handed $107 million in guaranteed money to was on the sideline.

While there is no denying they aren’t in that game without him, it is still a reality for both the Eagles and Wentz that in many ways their frachise quarterback is still searching for his first Super Bowl win -- something that isn't necessarily a bad thing.

Speaking Tuesday morning on Sportsradio 94WIP, Wentz was asked about how much having to sit that game out drives him to make sure he wins (and starts in) another Super Bowl.

“It is extremely important. That is what we are striving for every day. Even after winning that one, for everyone in this organization, we are not complacent with just one," Wentz said. "I know for me personally, it still gets to me that I wasn't out on that field. That is definitely the goal and I am as hungry as ever to get back there.”

Of course, as he enters only his fourth season, Wentz not having started in the Super Bowl is not a huge deal. Many quarterbacks don’t reach the Super Bowl that early on in their career. Still, the way Wentz’s career has played out, it is easy to see why he would be so motivated to get back to the big game.

It isn’t a stretch to say that if Wentz had not torn his ACL in 2017, ending his season, he would have collected both the NFL MVP and Super Bowl MVP that year. He was playing at that high of a level and the team around him, as evident by the run they went on, was that good.

Now, there is an argument to be made that the roster the Eagles have assembled around Wentz is even better than the one that won Super Bowl LII. He has the best set of skill position players he has ever played with and has arguably the best offensive head coach in the NFL.

Perhaps most important, however, is that Wentz is finally healthy. He has looked amazing during OTAs so far and seems to be completely healed from the fractured back that ended his 2018 season.

Add everything up, and Wentz has all the tools around him to make sure this time around it will be him under center in the Super Bowl — and him holding the MVP trophy at the end.

You can hear the full interview below: