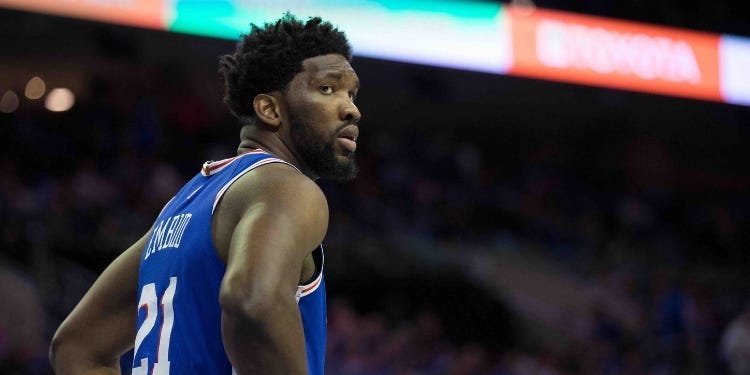 Dr. David J. Chao, also known as “Pro Football Doc”, is a name that plenty of Eagles’ fans are familiar with from quarterback Carson Wentz’s recovery from his ACL/LCL tear in the 2017 season. Although Chao never examined Wentz, the former NFL doctor is known for using videos and pictures to give his education opinion on injuries, and has developed a strong track record of being correct.

Sixers’ fans should hope he is wrong about this one.

In a piece for the San Diego Union Tribune, Chao wrote that he has serious concerns about Joel Embiid’s long-term health after the center was seen wearing this brace prior to the Sixers’ game against the Brooklyn Nets on Saturday:

Embiid going through pregame warm-ups, with some form of a brace on. pic.twitter.com/0dcV3b0H02

You should read the full article by Chao on what the brace could mean, but this part wrriten by Chao should be especially concerning to Sixers’ fans if true:

The brace shown is used for unicompartmental arthritis. It could be used for a bone bruise, but absent an acute injury that is unlikely. And given Embiid’s long-term value, I doubt the Sixers medical staff would allow him to play through a bone bruise to risk further damage. Therefore the brace almost certainly means Embiid’s longevity is in question. Assuming the brace means he has some sort of arthritis, there is no complete cure. There can only be management of the issue.

As with any doctor that makes a diagnosis or statement about an athlete without actually examining the athlete, Chao’s comments should be taken for what they are — an educated guess based on a picture and publicly known information.

Still, the facts are that Embiid missed 14 of the team’s final 24 games entering the postseason with soreness in his left knee, and no real answer from the team on any kind of specific injury causing the issue. Chao’s use of the word “management” as the only way to handle arthritis in the knee is also in line with the “load management” term the Sixers have used to describe why Embiid isn’t playing.

For now, the Sixers’ biggest concern is Game 2, a game they must win after dropping Game 1 to the Nets.

Still, after a bad loss on Saturday, this article by Chao certainly isn’t going to brighten spirits amongst Sixers’ fans.