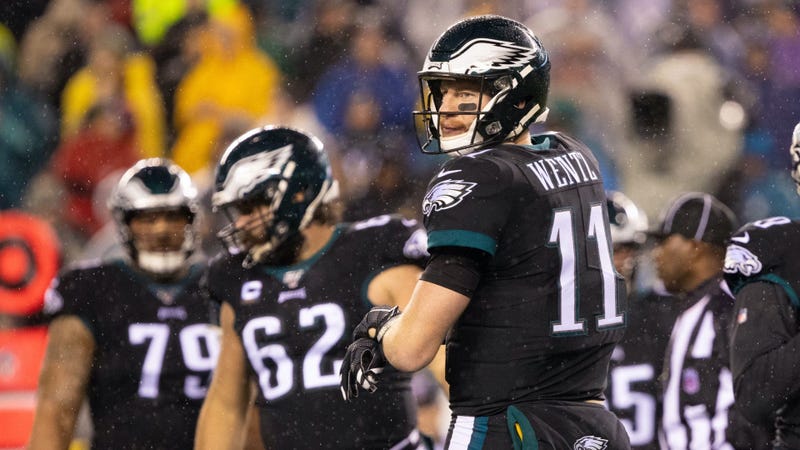 The little bit of momentum, the big win and the reason to believe in the Eagles everyone has been looking for this season might have actually come last Monday night.

Yes, we have seen a spark from this team before. They beat the Indianapolis Colts last season, in Carson Wentz’s first game back, only to lose to the Tennessee Titans the following week. They had a dominating win over the Giants a few weeks later, then lost to the Carolina Panthers. This season they beat the Green Bay Packers, only to play poorly against the New York Jets and then get embarrassed in back-to-back games after that.

Every time this team has made fans believe, they have let them down. Watching this team for the last two years, save for a few games with Nick Foles, has been hard. The penalties, the slow starts, the big plays allowed on defense and the boring dink-and-dunk style on offense. The new norm has been a lot of things, but it certainly hasn't been fun.

Now, Wentz and the Eagles have a chance to change that, keep this spark going and maybe do something special the rest of the season.

Which is why heading into Sunday, all I ask of this team is this — please, please just win.

By winning on Sunday, the Eagles will not only keep their playoff hopes alive, and all of the drama that comes with it, but it could set up one of the biggest regular season games to ever take place at Lincoln Financial Field in two weeks against the Dallas Cowboys. It is a chance to start changing the narrative around this team, and a chance to start escaping the same issues that have plagued them the last two seasons. It is also a chance to get things going with young players -- like Boston Scott, Greg Ward, Miles Sanders, Dallas Goedert and others -- that will actually be here next season.

Sure, Washington is playing better, but they are by no means a good team, and are very beatable. They have a rookie quarterback in Dwayne Haskins, they have lost running back Derrius Guice for the rest of the season and won’t have their best player in Ryan Kerrigan on Sunday. They are eliminated from the playoffs and should be more interested in a top draft pick than a win.

The Eagles should beat Washington. Even with the flaws of this team, and the injuries they are dealing with, they should be expected to win on Sunday. There is no excuse not to.

A lot of the current reason for optimism has to do with the play of quarterback Carson Wentz, who after a disappointing first 12 games, had a career moment at the end of the team’s win over the Giants. When the arrow with Wentz is pointing up, the franchise’s arrow is as well, and right now it is the highest it has been all season coming off of his the best win of his career.  This is Wentz’s chance. It is right there, and it is a chance to make 2019 the season everyone points to, and saves fans from ever having to use 2017 to rationalize Wentz being good ever again.

There is reason to be skeptical. The team hasn’t earned anyone’s trust yet. But if Wentz and the team can come out on Sunday and beat Washington in a convincing manner, we should all be excited about what will come next.

The Cowboys are not good and coming to Philadelphia. The Giants have mailed it in and will be completely checked out by Week 17. The divison is there for the taking.

We should all hope the Eagles ride the momentum of Monday night and take it down the path to the playoffs that is laid out perfectly. I don't want to write about slow starts, close losses and bad penalties anymore, and fans don't want to talk about them anymore. I want to write about potential playoff opponents and a huge game against the Cowboys, and fans are begging to see it.

All they have to do to take advantage of it and save us all?