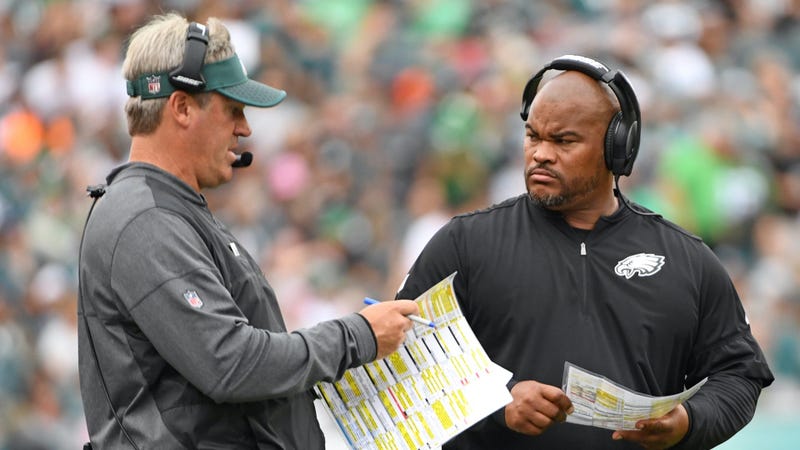 January 10, 2020 01/10/2020 2:41 pm
The Eagles are in need of a new offensive coordinator after firing Mike Groh on Thursday, and speaking Friday morning on 94WIP, head coach Doug Pederson confirmed that running backs coach Duce Staley is indeed a candidate for the job.

“Duce is an important part of my staff. Duce has done an excellent job for me,” Pederson said. “Everything is on the table. Everything is open for me. He could be part of that conversation.”

This is not the first time Staley has been considered for the job, as he was interviewed prior to the 2018 season when the team ultimately hired Groh. They also interviewed Staley in 2016 for the head coaching job that ended up going to Pederson.

Could things be different this time around?

There is little argument Staley has earned the promotion. He has done an excellent job with the running backs, has been on Pederson’s staff all four seasons and with the Eagles as a coach since 2011. If Staley is passed over once again, you have to wonder if the Eagles will ever make him the coordinator or give him any kind of meaningful promotion beyond running backs coach.

That being said, it would still be surprising if they did indeed promote Staley, having essentially passed him over twice for the job. It didn’t work out the last time the Eagles promoted from within, moving Groh up from wide receiver coach to offensive coordinator, and there is an argument to be made for a fresh set of eyes needed on the offensive. Although Staley could bring new ideas, the fact he has been in the building might work against him.

One thing is clear — the fans want Staley to get his shot at coordinator.

Now the question is whether the Eagles will give it to him.