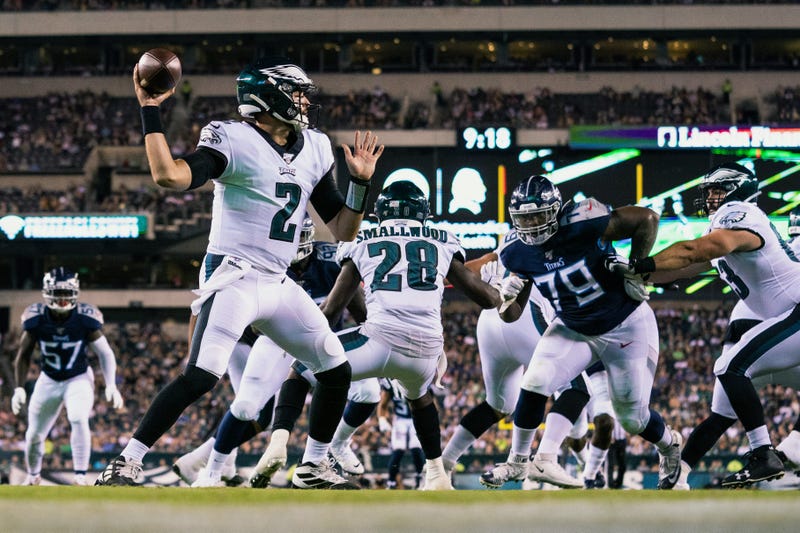 With one preseason game now in the books, the Eagles’ coaches and front office have a much better idea of what they have on their 90-man roster, and who they should keep on their final 53-man team.

Coming off of their preseason loss to the Tennessee Titans, here is my latest 53-man roster prediction

Quarterback: Carson Wentz, Nate Sudfeld, Cody Kessler (3)
Analysis: The injury to quarterback Nate Sudfeld is a bad break for this team, but the fact he will be back at some point in the first month-or-so of the season definitely softens the blow. What the Eagles can’t get around now, however, is having to carry three quarterbacks on the roster — and potentially four if they really want to protect Clayton Thorson. Being forced to keep three quarterbacks is going to make the team cut a player at another position they otherwise wouldn't have. The silver lining of Thorson’s terrible first preseason outing is that he will likely make it through waivers and onto the practice squad. At this point, even if he doesn’t, you have to wonder how big of a loss that even is for the Eagles. Kessler is the top backup to Wentz right now, but that could change very quickly if another quarterback is brought in — something Kessler will try to prevent from happening over the next two preseason games.
Running back: Jordan Howard, Miles Sanders, Darren Sproles, Wendell Smallwood, Corey Clement (5):
Analysis: The top three at running back are all locks, but decisions at the backend of the position are not easy. Both Smallwood and Josh Adams have had impressive training camps so far, but only Smallwood made the most of his touches in the preseason opener vs. the Titans. Adams didn’t have a great game, fumbling the ball away once and nearly dropping an easy pass along the sidelines. Plays like that are exactly why the Eagles trust Smallwood so much and will likely want to keep him on the roster. That leaves the final running back spot between Clement and Adams. Clement has not practiced much in training camp, and didn’t play against the Titans, which could make this an interesting one. When it comes down to it, however, it is hard to see the Eagles cutting a player that one year ago was a huge part of their gameplan in Super Bowl LII — and a player that almost certainly won’t make it through waivers.
Wide Receiver: Alshon Jeffery, Nelson Agholor, DeSean Jackson, J.J. Arcega-Whiteside, Marken Michel (5)
Analysis: Is there a fifth wide receiver worthy of a roster spot? As deep as this team is perceived to be at receiver, the answer to that might be no, especially with Mack Hollins still sidelined and not playing in the preseason opener. Michel might be the best option after he burned Titans cornerback Adoree Jackson for a 75-yard touchdown. Veteran receiver Charles Johnson has been getting first-team reps, and started this past Thursday, but has not made the most of those chances. The Eagles keeping only four wide receiver should not be ruled out.
Tight Ends: Zach Ertz, Dallas Goedert, Richard Rodgers (3)
Analysis: The Eagles could keep four tight ends, especially with how many two-tight end sets they are going to run, but neither Joshua Perkins or Will Tye have stood out so far in training camp. The team having to keep three quarterbacks also hurts their chances of going deep at tight end.
Offensive line: Jason Peters, Brandon Brooks, Jason Kelce, Isaac Seumalo, Lane Johnson, Stefen Wisniewski, Halapoulivaati Vaitai, Matt Pryor, Andre Dillard (9)
Analysis: There are at least seven locks at this position, but likely eight if you consider Wisniewski a lock, which he likely is considering he can both play multiple spots on the interior offensive line and has been with the team for two years. The question is whether they keep Mailata and Pryor. Mailata has had a very rough training camp, and had his ups-and-downs against the Titans, and still doesn’t seem even close to ready to play against starting defensive ends in the regular season. If Mailata can’t go in a game now, and isn’t one of the top three best backups at tackle, why would the team keep him?

When the Eagles drafted Mailata, however, they likely knew this was going to be a long-term project. There is also the very real chance that Mailata doesn’t make it through waivers, especially with Joe Douglas now in New York with the Jets. If the decision comes down to Mailata or Pryor, however, Pryor feels like the safer bet at this point.

Defensive line: Brandon Graham, Fletcher Cox, Malik Jackson, Derek Barnett, Vinny Curry, Josh Sweat, Timmy Jernigan, Treyvon Hester, Hassan Ridgeway, Daeshon Hall (10)
Analysis: The defensive end that made the most of Thursday’s game was Hall, who was all over the field and did a great job getting after the quarterback. Hall isn’t talked about much when discussing the younger defensive ends on the roster, but he shouldn’t be overlooked, considering he was on the team last year and active for the playoffs. He seems far more ready to contribute than rookie Shareef Miller, who had a solid game, but still might be heading for a shady-injury that puts him on injured reserve for the season.

Other than the final defensive end spot, there isn’t much to decide for the team along the line, unless of course they are debating bringing in a veteran via a trade — something that shouldn’t be ruled out.

Linebackers: Nigel Bradham, Kamu Grugier-Hill, Nate Gerry, L.J. Fort, Zach Brown (5)
Analysis: Thursday was not a good night for the linebackers, as both Gerry and Fort gave up touchdowns, and Brown only really impressed against the run. The Eagles need to hope-and-pray that Bradham is ready for Week 1 and that Grugier-Hill is back on the field before November.
Cornerbacks: Ronald Darby, Avonte Maddox, Sidney Jones, Cre’Von LeBlanc, Rasul Douglas, Orlando Scandrick (6)
Analysis: Injuries will play a huge role in deciding which cornerbacks make it and which don’t. At this point it seems very unlikely that Jalen Mills (foot) is going to be ready for Week 1, and the team has likely already made the decision he will start the season on the PUP, considering they placed him there at the start of training camp. The strong play of Jones and Douglas on the outside will likely also factor into the team taking their time with Mills. Scandrick has played well so far since coming into camp, and the injury to LeBlanc (foot) could cause them to keep him on the roster to start the season, even if that will guarantee his contract for the full season. The poor play by the young backup cornerbacks in the preseason opener, especially Jeremiah McKinnon, ended any outside shot that they end up getting a roster spot.
Safeties: Malcolm Jenkins, Rodney McLeod, Andrew Sendejo, Blake Countess (4)
Analysis: The Eagles could part ways with Sendejo and add a fourth-round pick in the process, but the coaches seem to really like the veteran, as he has been with the first-team defense during training camp so far with McLeod sidelined. The real battle will be between Countess and Sullivan, a battle that Countess likely has the upper hand in, despite the fact Sullivan has been getting far more reps with the first-team defense. The Eagles didn’t pick up Countess off of waivers and then re-work his contract just to cut him.
Special teams: Cam Johnston, Jake Elliott, Rick Lovato (3)
Analysis: As always, the special teams are the easiest part of the roster to project — which isn’t something the Eagles shouldn’t take for granted.
PUP: Jalen Mills
IR: Shareef Miller
Practice Squad: Greg Ward Jr., Carlton Agudosi, Alex Singleton, TJ Edwards, Clayton Thorson, Keegan Render, Sua Opeta, Jay Liggins, Boston Scott, Kevin Wilkins
You can follow Eliot Shorr-Parks on Twitter at @EliotShorrParks or email him at esp@94wip.com!