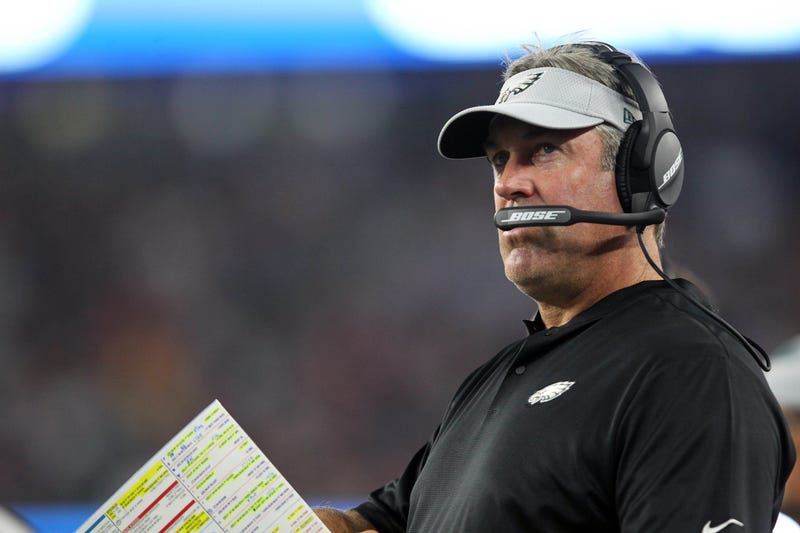 Free agency might not even be one week old, but already, the Eagles roster looks a lot different than it did prior to the start of legal tampering.

Top personnel exeuctive Howie Roseman has already filled two of the team's biggest needs with a free agency signing of Malik Jackson and a trade for DeSean Jackson. Then, he created a new need by dealing away Michael Bennett.

So where does the roster stand now?

Here is a look at who on the roster is a long shot, who is on the bubble, who could be traded and who is a lock to make the team:

Long shots (16): B.J. Bello, Josh Hawkins, Carlton Agudosi, Tyreek Burwell, Anthony Fabiano, Johnny Holton, Kaleb Johnson, Mercy Maston, Jeremiah McKinnon, Marken Michel, Braxton Miller, Dorren Miller, Donnel Pumphrey, Alex Singleton, Chandon Sullivan, Will Tye
Analysis: This projects to be a good offseason to try to make the Eagles. The roster is filled with holes, especially behind established starters. Outside of cornerback, there aren’t many positions where a young player, or journey man veteran, won’t have a legit shot to make the team. The current long shots on the roster are compromised mostly of players the team has signed to future deals. Players to keep an eye on? Center Anthony Fabiano, who spent time with the team last season, and linebacker B.J. Bello.
On the bubble (17): Josh Adams, Nate Gerry, Shelton Gibson, Daeshon Hall, Deiondre’ Hall, Bruce Hector, Treyvon Hester, Boston Scott, Mack Hollins, Joshua Perkins, Josh Sweat, Paul Worrilow, Asantay Brown, Joe Ostman, Wendell Smallwood
Analysis: Another result of the Eagles’ lack of depth and holes on the roster? There are going to be plenty of new faces coming in, and that will leave some noteworthy players facing a tough battle to make the team. Two prime examples are receivers Mack Hollins and Shelton Gibson. Both were expected to play big roles on the team last season, and neither ended up making an impact. Hollins missed the entire season with an injury and Gibson couldn’t make it onto the field with the offense despite a strong training camp. Now with DeSean Jackson on the roster, the two are likely competing for one spot, and both will have to really shine in training camp to make the team. Another interesting set of players to keep an eye on? Bruce Hector and Treyvon Hester, who will battle for a roster spot at the wide-open defensive tackle position, but in addition to Malik Jackson, multiple rookies will likely come in and bump them further down the depth chart.
Trade Candidates: Rasul Douglas, Jalen Mills
Analysis: To be clear -- trading either player would be a mistake, and not something I would do, but Douglas and Mills find themselves on this list because of the logjam at cornerback. It is hard to imagine the Eagles moving on from Sidney Jones, Cre’von LeBlanc or Avonte Maddox. It wouldn’t be surprising if the team drafted a cornerback either. They won’t just give either away, but of all the cornerbacks on the roster, these two seem the most likely to be moved. The fact that so many mock drafts have the Eagles selecting cornerbacks, and the Eagles history of drafting players in the secondary, could also be a sign that they are going to move on from one of their young cornerbacks.
Locks (33): Nelson Agholor, Corey Clement, Nigel Bradham, Brandon Brooks, Fletcher Cox, Ronald Darby, Jake Elliott, Zach Ertz, L.J. Fort, Dallas Goedert, Brandon Graham, Kamu Gruiger-Hill, DeSean Jackson, Malik Jackson, Alshon Jeffery, Malcolm Jenkins, Lane Johnson, Cameron Johnston, Sidney Jones, Jason Kelce, Cre’Von LeBlanc, Chris Long, Rick Lovato , Avonte Maddox, Jason Peters, Matt Pryor, Isaac Seumalo, Nate Sudfeld, Halapoulivaati Vaitai, Carson Wentz, Derek Barnett, Jordan Mailata, Rodney McLeod
Analysis: It would be shocking if any of these players aren’t on the roster next season, and although new players will be added, these players will have the biggest impact on how the 2019 season plays out. Agholor finds his name on this list after the team decided to keep him past the date where his 2019 salary became fully guaranteed, and his announcement on Twitter that he is excited to be back for 2019 seems to be a pretty strong indication that he believes he will be in midnight green next season.
Free Agents (10): Chance Warmack, Chris Maragos, Mike Wallace, Corey Graham, Darren Sproles, Richard Rodgers, LaRoy Reynolds, Paul Worrilow, Jay Ajayi, DJ Alexander
Analysis: The Eagles have aleady lost four players -- Nick Foles, Golden Tate, Jordan Hicks and Jordan Matthews -- in free agency. That number is likely to increase soon with Jay Ajayi visiting the Indianapolis Colts.
You can reach Eliot Shorr-Parks on Twitter at @EliotShorrParks or email him at esp@94wip.com!