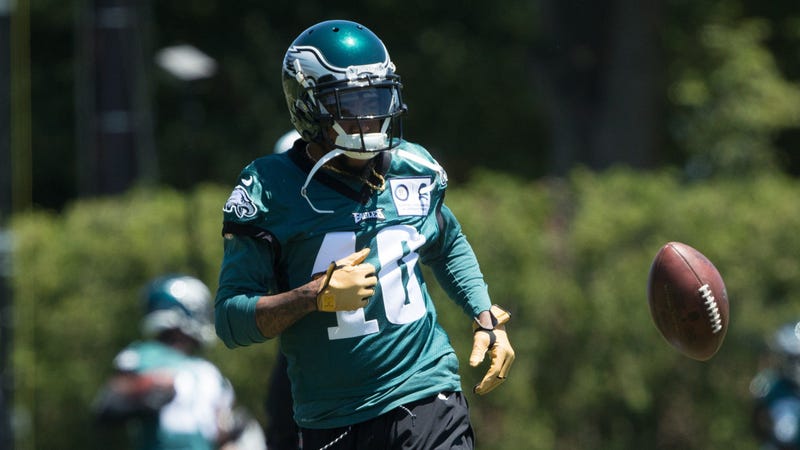 DeSean Jackson has said repeatedly how happy he is to be back in Philadelphia since being re-acquired by the Eagles earlier this offseason, and he spent this past weekend proving it.

Jackson's weekend started by having his foundation host a free football camp for local kids:

Eagles WR DeSean Jackson hosted a Football Camp in North Philly yesterday free of charge for kidsKids learned how to play from @DeSeanJackson11 & were provided a T-shirt, shorts & lunch for free!@6abc @GeeJackson10@bmcrae10@eagles#DeSeanJackson#Eagles pic.twitter.com/Ld6xgGKJzS

Then, later that evening, Jackson went around Philadelphia and handed out food to homeless people in the city:

DeSean Jackson last night went around North Philly giving food to the homeless“We’ve got some free food for y’all”DeSean says he has matured since he was let go by Eagles 5 years ago. He loves being back in Philly #Eagles-- @DeSeanJackson11 pic.twitter.com/SwoaU5w9kM

Finally, he had a party to celebrate his return to the Eagles, with a few of his teammates -- including tight end Zach Ertz -- in attendance.

When the Eagles re-acquired Jackson earlier this offseason they insisted they were getting a much more mature Jackson than the one the team (i.e. former head coach Chip Kelly) cut back in 2014. So far that has been the case, as Jackson has not only been at nearly every day of voluntary OTAs, but he has been a leader to the younger players on the roster as well. While all players that come to the Eagles -- and really any team -- always say how happy they are to be in a new spot, it is clear watching Jackson that he has genuinely excited to be back in an Eagles' uniform.

And if he plays at the level he has displayed during OTAs so far, and keeps up the same kind of chemistry with quarterback Carson Wentz he is already starting to build, Eagles' fans are going to only get more-and-more excited as well that Jackson is back.