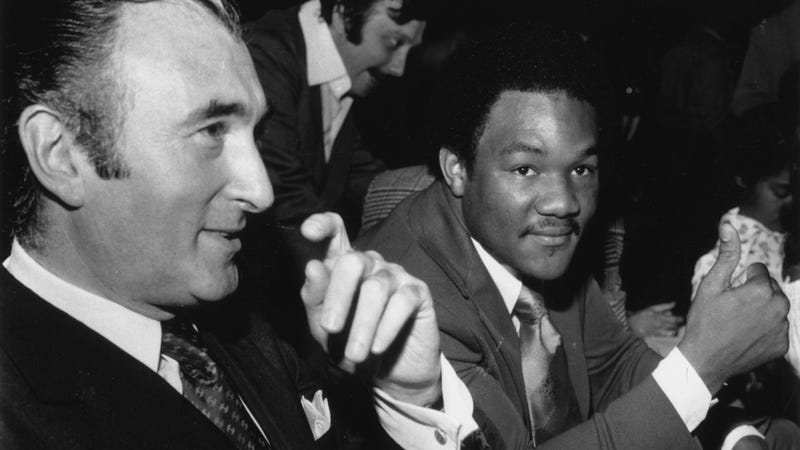 The two-time heavyweight champion and Olympic gold medalist joined Glenn and Ray on Saturday as part of the 'Tell Us Your Story' series and talked about the famous Sunshine Showdown with Joe Frazier.

"Everything you didn’t want to face in boxing, Joe Frazier had it. That was a long walk to the ring, that was scary."

Coming into the fight, Frazier was the "undefeated and Undisputed World Heavyweight Champion with a 29-0 record (25 KO). Foreman was an impressive 37-0 (34 KO), which made the fight highly anticipated.

"I was doing those things to Joe Frazier that I had been doing all over the country for the last three years. Here he is trying to get close to me. Stop. Block. Get out of the way. Those were the things I was told to do from the day I turned pro… I had developed a defensive style with a punch to go along with it. That was me totally. I was right where I should have been with Joe Frazier. Defensively, it was an easy fight."

All Glen & Ray interviews: Tell Us Your Story

"It was a happy moment because I had sacrificed so much for three and a half years. I didn't have a life. Everything was about training camp and going somewhere else to box. There, I had really done it."

Foreman also touched upon his famous fight with Muhammad Ali, dubbed as "The Rumble in the Jungle".

"When I look back at that fight, my vision was giving Mohammed Ali a chance for the title that's all. I couldn't train. I had to take off of sparing to let that cut heal. Could you imagine fighting for the world championship and allowing a deep cut like that to be healed in three weeks? I didn't leave the country to even consol a doctor. The government came to me and begged me to not leave the country. They said we can't put anything big on like this again, if you leave and come back this will never happen again. They cried to me and I'm sitting there like a king on a throne deciding what to do about this. I decided to stay as a favor."

Foreman lost that fight, is first professional loss of his career. For Big George though, he will always remember the wins.

"Whenever you win, you like the music that goes along with it."

Foreman also talked about his amateur years as a boxer, winning the Olympic gold medal, why he came out of a 10-year retirement, his spiritual rebirth and his fight with Michael Moorer in 1994.