After the firing of Super Bowl-winning head coach Doug Pederson Monday, Philadelphia Eagles chairman and CEO Jeffrey Lurie met with the media. At the forefront of the discussion - why was general manager Howie Roseman retained if things were bad enough to dismiss Pederson?

It's hard to say that Lurie gave an answer on Roseman that will satisfy the fanbase.

Lurie, much like Roseman at the conclusion of the season, said that in the years after winning Super Bowl LII, the Eagles made moves with more of a short-term focus, hoping to win a second title. While they did reach the postseason in 2018 and 2019, Lurie seemed to believe that such a strategy would eventually catch up with the team. And that's what happened in 2020, as the team went 4-11-1. Lurie used the phrases "transition" and "retool" Monday, though if you read between the lines, you were left with the feeling that he may know a rebuild could be in store.

The problem that many have is that while the Eagles may have made some short-term decisions in recent years, it's a fairly unarguable point that Roseman has struggled to make the most of what picks he's had in recent years.

It's hard to know what to make of the decision to trade up for Carson Wentz in the 2016 NFL Draft at this stage, though 2017 first-round pick Derek Barnett has turned in middling results thus far, posting 19.5 sacks in four seasons. 2018 first-round pick Andre Dillard tore his biceps before the 2020 campaign started, missing his sophomore season. This past year's first-round pick, Jalen Reagor, had 396 receiving yards in 11 games, despite being selected above Offensive Rookie of the Year candidate Justin Jefferson. JJ Arcega-Whiteside, Shareef Miller, Clayton Thorson, Sidney Jones, Mack Hollins and Donnel Pumphrey are among the other draft misses that the Eagles have had under Roseman.

Lurie says things aren't as simple as it may seem.

"I think you really have to look at the big picture of have you analyzed every single draft pick and street free agent? Have you compared it to other teams? Have you compared it to other successful teams and do they have two, three year drop offs with less volume? Are the picks that you are talking about seen in the long run or just in a one-year period? There is a lot to look at there, and I'm not disagreeing with anything. I'm just saying you have to really look at it. You take whichever organization you want and look at it over a multi-year period, you are going to see highs and lows of drafting, highs and lows of free agent acquisitions. You will have to make your own determinations of do they have the right people in the building. Is that two years of not having good first-round picks...is that related to the people in the building or is that because the two players they were actually going to draft got taken just before and they are All-Pro players in the league? I have to be much more in-depth and complex about the analysis.

"Luckily for me, I get to sit there and see exactly what took place and takes place. Maybe someday I'll write a book about it but you cant really talk publicly about what could have been and all that. There were mistakes made and they have to be improved and corrected and I expect us to have that success. We have certainly had that success on the field that has be to in every aspect of the organization.

"I'm not somebody who is very satisfied. Even when we are winning, we can do a lot better. My message to Jim Schwartz after we won the Super Bowl was 'wow that was not a good defensive performance.' It was great against the Vikings and the Falcons. My personality is I want to win badly, I want to win more Lombardi's for Philadelphia and our fans - we have the greatest fans around - and I will do anything possible. If it means making any change necessary, I will." 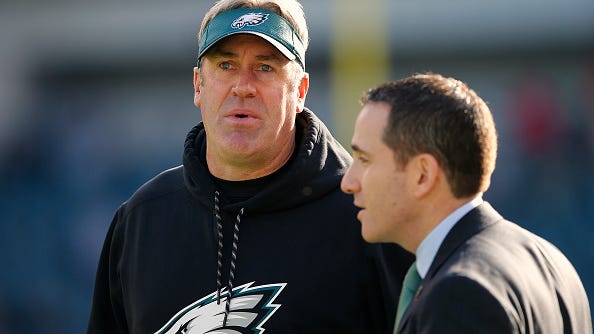 Report: Doug Pederson 'was sick of people telling him what to do'

In addition to struggling with recent draft picks, Pederson appears to be the second consecutive head coach that Roseman has had a falling out with. After the 2014 season, Roseman was, in effect, demoted, as then-head coach Chip Kelly seized control of player personnel. Roseman resumed leading the player personnel department when Kelly was fired in December of 2015, and eventually regained the title of general manager.

Though Roseman and Pederson appeared to have a strong relationship initially, there's evidence that the two didn't end on great terms. NFL Media's Ian Rapoport reported that Pederson "was sick of people telling him what to do," with Jeff McLane of The Philadelphia Inquirer reporting on the frustration that Pederson had with interference on his coaching staff choices.

One of the things ownership likes about Roseman is the ability to continue to surround himslef with a strong group.

"It is easy to talk about the quarterback, the head coach and the general manager, but honestly we are a product of those that surround us. I see the people that Howie has attracted to our organization…the last two major GM searches have all been raiding our organization whether that's Joe Douglas or Andrew Berry. We have about five people in our organization that right now I can project will be general managers in this league… We have a real strong nucleus."

"One of the jobs of the general manager is to attract really good people and executives around him because it’s not meant for one person. There have been mistakes, but what I have to look at is the process and the performance over time. If we are not identifying the best players leading up to a selection in the draft, then that is a problem. If we are identifying the best players but they get taken several picks ahead of us, that's also part of the evaluation. That's part of understanding the process, understanding the details. I always have to make the tough decision of are we getting it right, where are we getting it wrong, where are the decisions being made that may cause us to - once we didn’t get the three players that we really wanted right there that just got taken… what's caused that next selection that may not have been maximized.

"But in terms of every level of the football operation, I am really confident of where we are at and I don't see any reason why we aren't going to return to preeminence with more mid-term and long-term decision making."

We'll see if Lurie's confidence in Roseman pays off, because by all accounts, the Eagles roster is in the worst place it's been since the late 1990s. It's safe to say the city of Philadelphia is skeptical that the right person is steering the ship right now.