Just three short years ago, Torrey Smith and Carson Wentz won a Super Bowl together with the Philadelphia Eagles. Now, that Eagles team, with a 28-year-old Wentz at quarterback and the same head coach in Doug Pederson, is 3-7-1 and the conversation has shifted towards Pederson's potential firing and Wentz getting benched and/or traded.

Smith, the now retired 31-year-old former Super Bowl champion receiver, says if it was up to him rookie QB Jalen Hurts "wouldn't touch the field."

"I personally, I wouldn't play him," Smith told 94WIP's Jon Marks & Ike Reese when asked about Hurts' usage on Tuesday. "But the team obviously drafted him for Carson insurance and if you feel like the offense is really struggling that way, then you can go in that direction. But me personally, I would rather Carson Wentz all the way throughout the year. I mean, Jalen, he simply wouldn't touch the field. And I love Jalen Hurts as a player, I was huge fan of him coming out of college, but I mean you drafted him and you started a controversy for no reason for Carson. And whether he admits it or not, I would never ask him about it—and that's my boy, I talk to him. I would never ask him about that because whether he think it or not, it's tough when that's weighing over your head when you know we're talking about it on the radio right now. When you know fans are thinking it because you're not playing your best or the offense isn't playing its best. It's tough to deal with, it's another layer that complicates the issues that are happening right now."

It's no secret Wentz is struggling. He leads the NFL in interceptions (15) and sacks (46) and has a QB rating of 73.4, third worst in the NFL ahead of only Sam Darnold and Drew Lock. But Smith says a lot of it has to do with the Eagles' situation as well, as the team is dealing with key injuries to the offensive line and wide receiver position.

"He's probably overthinking it a little bit, but that's natural as a player," Smith said of Wentz's play. "We forget Carson Wentz is—and he still should have been MVP the year we won the Super Bowl. He's one healthy game away from being the MVP and he still is that guy.

"You have to watch the film as a quarterback and you're watching the film, the timing may not be right, or you're having a lot of pressure and you're trying to force plays because the team is struggling. You're trying to ignore the noise from the outside, but you feel that as a player. In the locker room as well, when you put all that weight on your shoulders, you feel like you're letting the team down, you feel like you're letting the city down. That can impact your play. I've been there as a receiver, I couldn't even imagine that pressure as quarterback. And that's not to baby him or make excuses for him, but when you're a competitor like he is, he's going to continue to fight and try to get out of it. It's been a struggle right now and there aren't any situations where it's like OK, you have an easy stretch coming up, you can get over it now. Or everyone is going to be healthy and 100 percent magically and the offensive line is going to be back to normal, that's not the case." 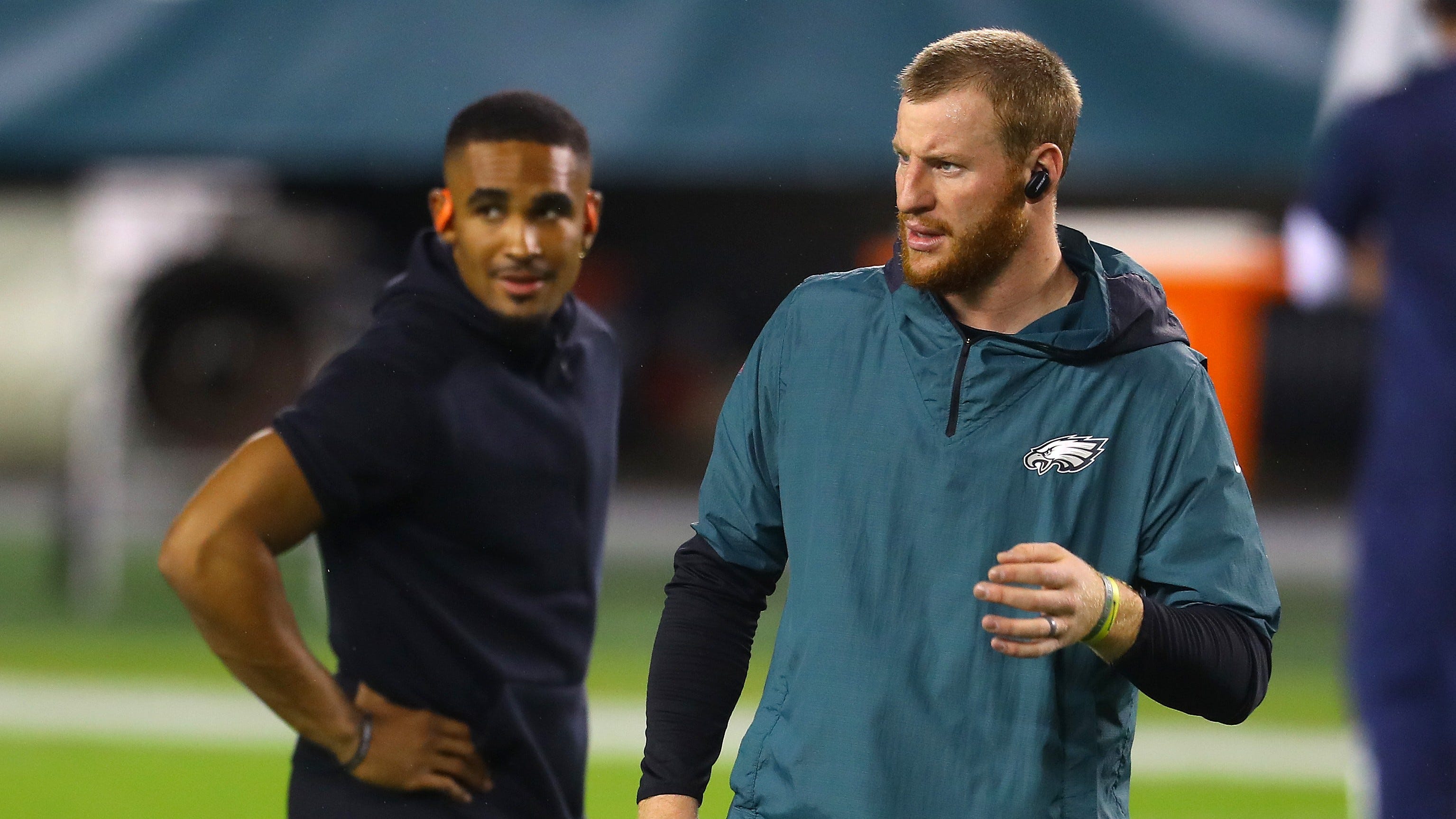 Smith was asked to compare this year's Eagles' offense to the one he played on in 2017.

"A lot of things are different," Smith explained. "You talk about the offensive line, guys are beat up right now, guys are hurt. The offensive line is not the same and that's not a knock on anyone's talent, but man that offensive line that year was the best offensive line in the league. The receivers are young right now, they're learning, they're growing. Alshon [Jeffery] is just coming off an injury, D-Jac [DeSean Jackson] is hurt. We had guys that were basically healthy the entire year. Alshon's shoulder was messed up, but Alshon played through that the entire year. You had guys that knew how to play, guys that played well together, there were no egos. Guys were just hungry and wanted to win and the defense was on fire too. There were no holes on the defense that year.

"It's the same offense!" Smith said. "A play is only as good as its execution. You just have to go out there and execute, that's what it's all about."