It feels like for the better part of his time of the league, the Milwaukee Brewers have been willing to at least answer calls on star closer Josh Hader.

Don't expect that to change this offseason, as Robert Murray of FanSided says that general manager David Stearns and the Brewers "intend to listen" to any offers they may receive for the 26-year-old this winter.

Four of the eight runs that Hader gave up in 2020 came in one outing, so his relatively underwhelming numbers this past season can be chalked up to an outlier in a pandemic-shortened season. It will be interesting, though, to see if teams have any level of concern that Hader did see some dip on the velocity of his fourseam fastball and slider in 2020.

There is plenty to like about Hader as a trade candidate, the most noteworthy part being that he can't become a free agent until after the 2023 season. That said, the entire sport just passed up a chance to claim Brad Hand, one of the sport's elite relievers, on waivers and commit to paying him $10 million in 2021. Spotrac projects that Hader will earn $5.65 million in his second of four years of arbitration eligibility, which isn't an earth-shattering amount in itself. However, between COVID-19 and the CBA expiring at the end of the 2021 season, there is plenty of financial uncertainty in the sport, and Hader will only get more expensive in the coming years.

Between Hand and Liam Hendricks, there are two elite relievers available in free agency, though both are on the wrong side of 30. Trevor Rosenthal, Blake Treinen, Alex Colome and Trevor May are all free agents as well, though none would come close to making the impact that Hader will. Of course, signing any of these six players wouldn't require surrendering prospect capital, so there are a ton of factors to consider.

It may be that this offseason just isn't a good time to be a seller, and the Brewers elect to hold onto Hader for 2021. Then again, adding Hader could help a team increase their chances of making a deep playoff run, so it's hard to rule out the possibility. Here are five teams that could make sense as trade suitors for Hader: 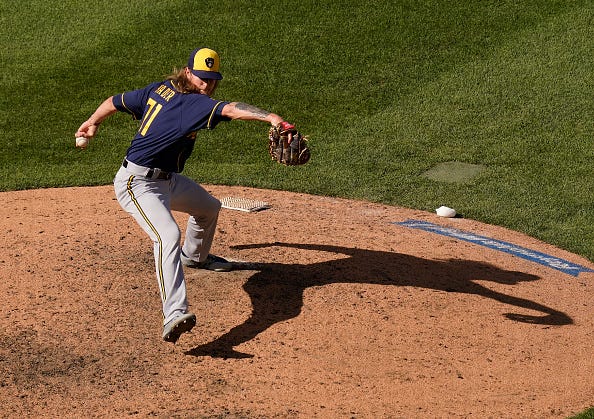 Over the past two years, the Braves have made quite a few notable developments in their bullpen, which is one of the reasons they finished within a game of reaching the World Series in 2020. However, Mark Melancon, Darren O'Day and Shane Greene are free agents this winter, so general manager Alex Anthopoulos will have to make some moves if he hopes to return an elite bullpen in 2020. That may mean hoping for a bounce-back season from Will Smith, while making smaller additions around A.J. Minter, Tyler Matzek and Chris Martin. However, the addition of Hader would help to level the playing field with the Los Angeles Dodgers in the National League. Christian Pache and Ian Anderson are probably off the table, and outfielding prospect Drew Waters may be as well. Righty Bryse Wilson and third baseman outfielder Austin Riley could be pieces that intrigue the Brewers from the Braves' major league roster, as could some second-tier prospects, like Kyle Muller, Braden Shewmake and Shea Langeliers. 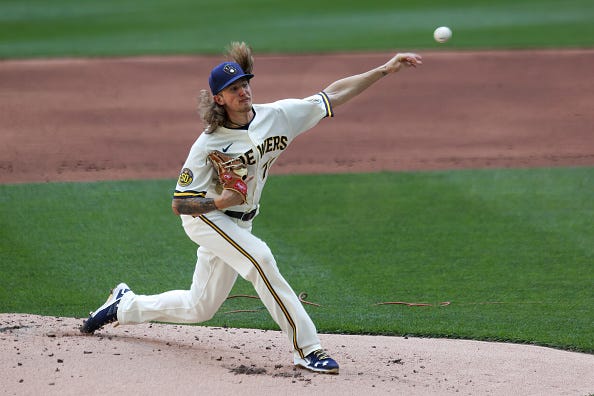 Josh Hader could be on the move this offseason. Photo credit (Dylan Buell/Getty Images)

Last December, RADIO.COM MLB Insider Jon Heyman reported that the Yankees had interest in Hader, just weeks after they re-signed Aroldis Chapman to a three-year/$48 million deal. Since that report, the Yankees also inked Zach Britton to a lucrative three-year deal, so they may be inclined to focus their attention elsewhere this offseason. If the Yankees did attempt to secure Hader and build the best bullpen ever, they have some intriguing trade chips. Gary Sanchez and Miguel Andujar are both change-of-scenery candidates, and Clint Frazier seems like someone that could develop into a star if given a chance to start on a more consistent basis. There would need to be more prospect capital added in a deal, but some combination of that trio could be an interesting trade return for a Brewers team that Murray says are looking to retool their lineup, which underperformed in 2020. The Yankees aren't the most likely landing spot for Hader, but they have had a string of disappointing postseason exits, so they can't be ruled out. 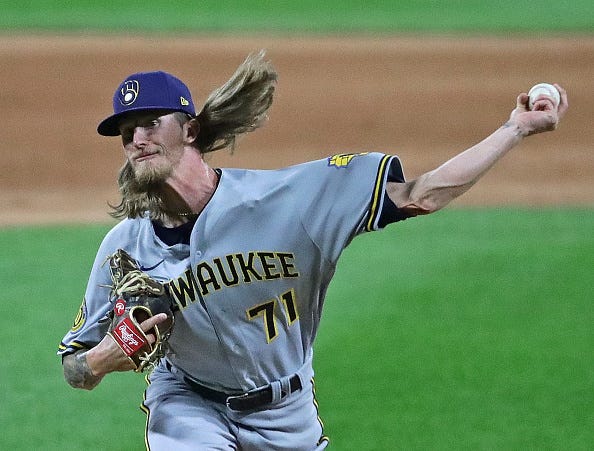 In terms of teams that desperately need to add impact reliever, the Phillies are at the top of the list. Despite a pretty strong offensive output and a strong one-two in their starting rotation with Aaron Nola and Zack Wheeler, the Phillies missed the playoffs for a ninth-consecutive season because of a historically-bad bullpen. One player alone isn't going to fix that, but at his best, Hader is the type of reliever that can mask a lot of other holes in your bullpen. The question becomes whether the Phillies have the prospect capital to acquire Hader. After a star rookie season, Alec Bohm isn't going anywhere. The same is probably true for young righty Spencer Howard. After that, there's a drop-off in terms of young talent in the Phillies' organization, which is why they've been shut out of the postseason for close to a decade. Completing a trade would likely require parting with shortstop Bryson Stott, a 2019 first-round pick, and even he may not be enough to headline a return. Scott Kingery, Adam Haseley and Mickey Moniak are other young pieces that the Phillies once hope could be core pieces who haven't lived up that billing, at least to this point. Jim Salisbury of NBC Sports Philadelphia reported that the Phillies were believed to have interest in Hader this past summer, and nothing has happened to change that. It's just a matter of whether the Phillies could put together an enticing trade package for Hader. 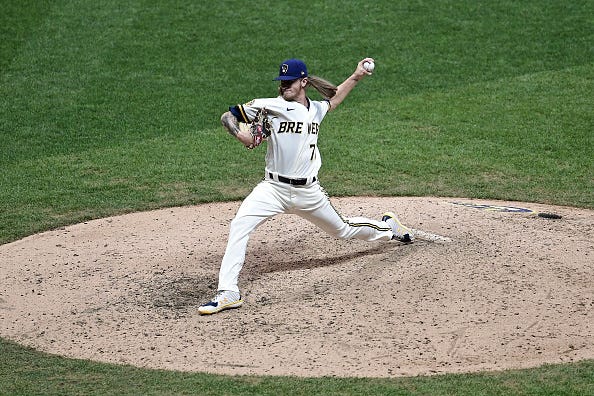 Though he's an all-time great Dodger, manager Dave Roberts seemed to lose confidence in closer Kenley Jansen in the postseason, essentially turning to a closer-by-committee to secure the team's World Series victory. That worked in 2020, though it may not be a formula that the Dodgers emulate. The Dodgers have a ton of relievers that were productive this past year - Dylan Floro, Brusdar Graterol, Victor Gonzalez and Adam Kolarek among them. Perhaps with Jansen due to make $20 million in the final season of his five-year deal, the Dodgers will hope for better results from the three-time All-Star, knowing other internal pieces could potentially fill the void if he scuffles. Then again, if the Dodgers added Hader and moved Jansen into a set-up role, it would give them the best bullpen in baseball, on top of having the deepest lineup in the sport. Since the 2000 Yankees, no team has repeated as World Series Champions. If the Dodgers tapped into their prospect depth to acquire Hader, it would make them the heavy favorites to end that trend. 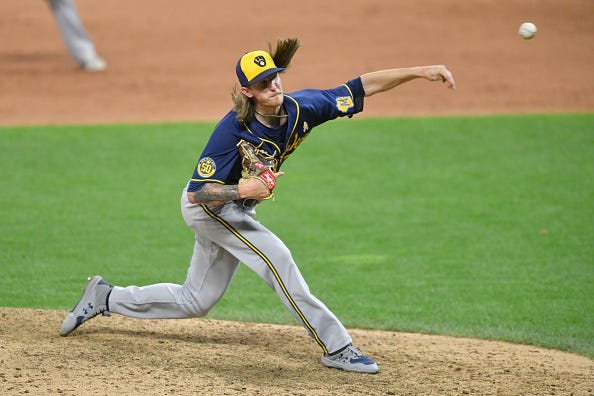 In three of the last four seasons, the Twins have been an exciting regular season team that hits a wall in the postseason. There does need to be some focus this winter on re-signing Nelson Cruz, but trading for Hader would give Rocco Baldelli a pretty incredible bullpen to work with. Trevor May and Tyler Clippard could very well depart in free agency, but there would be a lot to like about a bullpen headlined by Hader, Taylor Rogers and Tyler Duffey. This trade would feel pretty similar to the division-rival Cleveland Indians making plays for Andrew Miller and Brad Hand a few years away from free agency, moves that worked out swimmingly. It would be interesting to see if the Twins would be willing to dip into their lineup depth to complete such a transaction, or if some of their second-tier prospects like Trevor Larnach or Jordan Balazovic could headline a trade package.