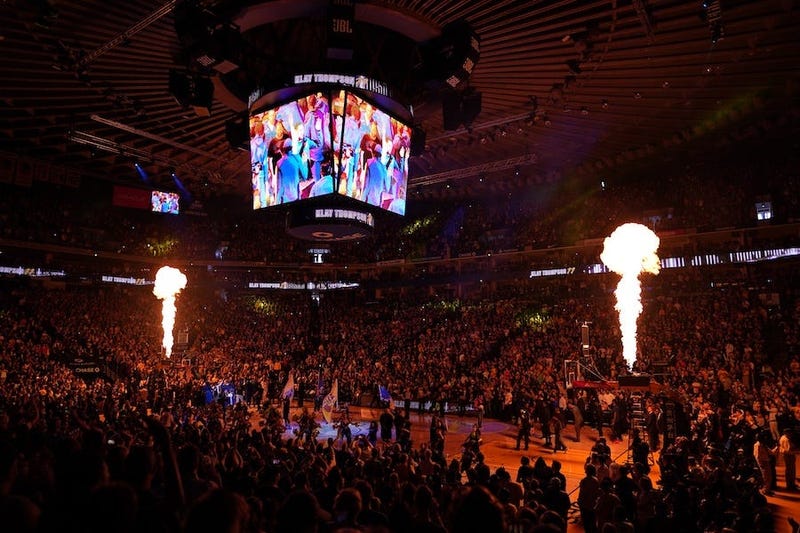 After the Golden State Warriors closed their regular-season run at Oracle Arena with a 131-104 win over the Clippers on Sunday night, we asked the 95.7 The Game staff to regale us with their favorite moments at the Oakland stadium, which has housed the Dubs for 47 seasons.

Whether it took two words, two sentences or two paragraphs, our hosts didn’t disappoint. Here are their memories…

I absolutely should say Game 5 of the 2017 NBA Finals, which featured the Warriors hoisting Larry on Oracle turf. I had tears in my eyes from watching the sheer joy displayed by the fans in my section. Or maybe those tears were from the smoke that quickly rose from the seats following Golden State's 129-120 win. I really can't remember the cause.

But my final answer is probably Game 1 of the 2018 NBA Finals. JR Smith running the wrong way at the buzzer. You can't make that stuff up.

Dan Dibley
The memory:
​The 1982 California state high school basketball championships in which my brother's Drake high school team held off Banning 87-85 to win the title. It was the 1st year that they had reinstated the state championship format and following my brother's game was Cheryl Miller's Riverside Poly high team.

This is the banner that will be hanging inside of the Chase Center. pic.twitter.com/1gmcOrDYxO

The Baron dunk/Dallas upset/We Believe team was the most fun, unexpected and intriguing stretch of basketball I’ve ever seen. It took me back to when I was kid and couldn’t wait to go to high school basketball games in Pennsylvania, where they’d draw 8,000-10,000 for doubleheaders in Hershey and Harrisburg.

Calling Sleepy’s incredible 51-point performance in Game 4 of the 1987 Western Conference semifinals against the “Showtime” Lakers.

The memory:
Game 5 of the 2017 NBA Finals. Confetti. Champagne. Marijuana smoke in the air. Thug tears. What a night…

Too many for me to narrow down to one so I’ll name five.

Game 5 of 2015 West Finals vs. Rockets. Warriors move on to NBA Finals for first time in 40 years

Game 7 of 2016 NBA Finals. Not the outcome Warriors fans wanted but a surreal game and atmosphere. Not to mention a Game 7 of the Finals. Not many get to be at and cover too many of those in their life.

Warriors first round upset of Denver in 2013 playoffs.

On This Date: In 2015, Klay Thompson set an NBA record with 37 points in ONE QUARTER -- pic.twitter.com/zNiEgd7c2Y

I was in the stands for Game 5 against the Cavs in 2015. Getting to attend that game as a fan was exhilarating. The series came back to Oracle tied at 2 games apiece when the Dubs won Game 4 in Cleveland. There was a vibe in that building unlike anything I have ever experienced at a sporting event. The winner of Game 5 when a series is tied 2-2 goes on to win 80% of the time.  LeBron had been playing out of his mind in the series as he was without Kyrie and Kevin Love. He went for 40 points, 14 rebounds & 11 dimes. His performance was absolutely iconic and something to behold.

But for the Warriors it was Strength in Numbers as Curry went for 37, Klay, Iggy, Draymond and Barbosa all went for double figures. I've never seen the crowd so engaged in every possession and the tension was so thick you could taste it.

The Warriors were holding on to a precarious one-point lead at 85-84 with five minutes remaining.

Then the Warriors took over. After a LeBron missed free throw, Curry hit a three to put them up 10, a few minutes later Curry hit another 3 to put them up 100-89 with 1:22 left, thus putting the game on ice. I have never in my life heard noise like that. The crowd also realized that with the win and a 3-2 series lead, the Dubs could close out the series in Cleveland so this would be their final game at home.

The crowd, the vibe, the noise, the performance and the realization that this team was going to win a title was absolutely something I will never forget.