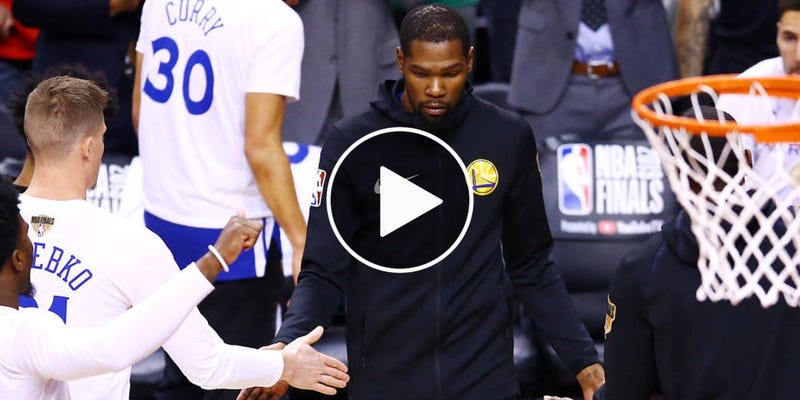 On the day of the draft comes more noise on the Kevin Durant front.

According to ESPN’s Brian Windhorst, there’s a chance that Durant, recovering from his torn Achilles, could ink a deal with the Warriors — with an eye on playing elsewhere when he makes his eventual return.

As Windhorst explained on “Get Up!” such a move would equate to a “delayed sign and trade”, a la LeBron’s blockbuster move to the Heat.

When LeBron left Cleveland for Miami in 2010, it was a sign-and-trade. The Cavs received two 1st round picks and two 2nd round picks, plus a pick swap and a trade exception... https://t.co/LQ0Mx2A0n8

Windhorst said the topic has at least been broached.

While convoluted, such a scenario would allow the Warriors to recoup assets and enable Durant to ink a five-year deal with the Warriors — $57 million more than he could sign with any other team.

Here’s how Windhorst lays it out:

Jalen rose and brian windhorst discuss the possibility of Kevin Durant doing a sign and trade deal with the golden state warriors . pic.twitter.com/za9EXXItoZ

Windhorst’s colleague, Adrian Wojnarowksi, reported on Wednesday that Durant is very much undecided on his future plans.

"I'm told KD is doing a lot of soul-searching right now, stepping back from the injury and processing all of this. For KD, he can go back to Golden State on a five-year, $200 million-plus deal. That gives him absolute assurance coming off this Achilles injury. Maybe it gives him something else to think about staying in Golden State. But Brooklyn and the Knicks are very much in the fight."

For now, the soul searching continues.