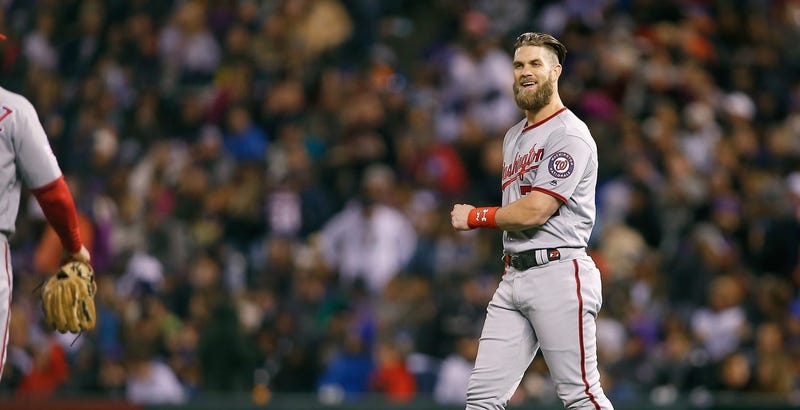 Bryce Harper watch could soon be drawing to a close, according to Chris Russell, a host on 106.7 The Fan in Washington D.C. Spoiler alert it *could* end very well for the San Francisco Giants.

"Maybe I took a little bit of a leap of faith here based on some indications I got from a real good source," Russell said of saying the decision would be announced on Friday.

"Bryce and his representatives, (Scott) Boras, his people, his wife Kayla, they've been meeting since Monday morning in Vegas. Bryce originally wanted this done, when it took this long, by Valentine's Day. Obviously, the contract has not been announced, signed, whatever."

"But I'm lead to believe by the people that I've talked to that are close to the situation — and I have, again, a real good source that has helped me through this process, let's just leave it at that," Russell said. "That Bryce was in a mood to celebrate yesterday. Now, the source said, 'I believe it's done.' I don't have concrete, 100-percent proof for you guys. I wish I did, otherwise I would have it and I would be running around with it. But I don't have that, so I want to caution everybody in Philadelphia. But that's what I was lead to believe, that this thing is now decided.”

"Now, what comes then is hammering out a contract. And if we were to believe the report that the Philadelphia Phillies had not even extended a formal offer — and I assume that to be a termed, written agreement, that type of thing, which I find hard to believe — then there might be more leg work to this. And therefore, hey the decision may be done but the contract still needs to be ironed out."

And the money question: who’s jersey will he be wearing on Opening Day? Skip to the 11:31 mark in the pod to hear Russell's "opinion" (as he admits) on the topic...

“I get in trouble for everything I say on my radio station. Everybody blows it up. All the sudden I’m like generating all these headlines, and I'm like, 'Whoaaa! I'm just offering an opinion, guys."

Russell also doesn't think the Phillies will win the derby, pointing out that Harper would have to face his old team (the Nats) 19 times in 2019.