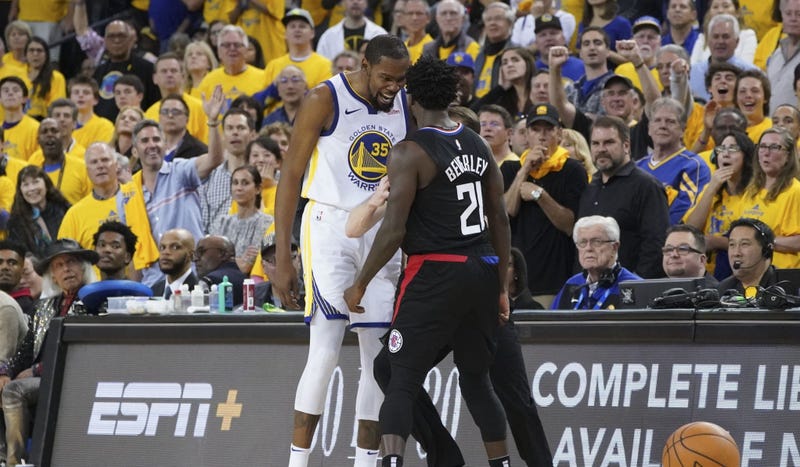 Climbing the hill that leads to the plaza that spans Oracle Arena and the Coliseum, there’s an OPD officer just beyond the metal detectors, the first checkpoint.

He’s holding a giant, black assault rifle. The sun is baking. The TV set is already buzzing with fans, crew members and on-air personalities. Atop the concrete bowl what appears to be a pair of snipers stand sentry.

The last playoff run at Oracle Arena is one hour from beginning.

“For me, the past two years have felt different than the first three,” head coach Steve Kerr admits at his customary pregame press conference before the 121-104 win over the Clippers on Saturday night.

For the first time this season, Kerr is holding court in the playoff press conference room. It’s down the hall from where he speaks for regular-season dates and twice as large.

“The first three felt a lot fresher,” Kerr continues. “It felt like we were on the climb and on the cusp of something, even after winning our first one, the next year we won 73 games.”

The bowl is golden.

The giveaway t-shirts, with a blue silhouette of the Bay Bridge emblazoned across the chest, are draped on every seat.

Out of nowhere, Kevin Durant is flying through the air. He catches the alley oop from a Warriors staffer.

“The following year, Kevin arrives — got a new toy,” Kerr recalls. “Everything was just sort of new and fresh.”

The assembled media and fans let out a collective gasp. His early warm-up is complete.

Dripping sweat, Durant makes his way toward the tunnel that leads under the lower bowl to the Warriors locker room.

“These last two years, no question, have been arduous,” Kerr explains. “There’s no other way to put it. It gets more difficult as you go.”

Durant stops to hug a security guard. On the bench sits Rich Kleiman, his agent and business partner. It’s a who’s-who of NBA luminaries.

Near center court, Mark Jackson, the deposed coach turned broadcasting star, is catching up with a Warriors assistant.

“The good thing is that we have a lot of experience,” Kerr says.

Klay Thompson is up next. As he walks out onto the court, he points up to the giant video board that hangs high over head.

“I thought I defeated you,” he calls out, mimicking the Kaiser Permanente commercial featuring the Splash Brother and Michael K. Williams, the actor made famous by his role as Omar in HBO’s “The Wire.”

Stephen Curry, who will punctuate his warm-up with the patented tunnel shot, is last.

“We’ve made it through the regular season, to this point, in good shape and we’re healthy. No matter how you get here, you’re here and ready to roll.”

Dual flamethrowers perched atop the stanchions and fireworks descending from the catwalks, are the accoutrements of the national anthem.

Blue and gold strobe lights flash through the darkened bowl. The music blares.

The Warriors, as always, are  dancing around the floor in goofy, exaggerated fashion

Surveying the scene is the septuagenarian assistant Ron Adams, stiff  in his starched suit, buttoned up as ever; it’s quite the juxtaposition.

There are more pyrotechnics. And more strobe lights.

Literally. That’s what the text on the video board reads.

This isn’t supposed to be a game, much less a series.

Warriors are minus-50,000 to beat the Clippers in the first round.That means you’d have to bet $50,000 to make $100.ESPN says the series is not even on the board at some places in Las Vegas.

Less than three minutes into the proceedings, DeMarcus Cousins, who’s making his playoff debut and who’s completely uncovered atop the key at the 3-point line, drains a triple. He beckons to the bench.

It’s not an omen of what is to come. Cousins fouls out in 21 minutes and finishes a team worst -17.

An emphatic dunk from Draymond ensues on the next possession and Doc Rivers, the veteran coach of the Clippers, hits pause.

In the current era, it’s the visiting coach special — call timeout before the Warriors go on a lightning quick run and the game spirals.

Draymond lives for the playoffs.

Green barges into Ivica Zubac. There’s hard contact. He gets the bucket and the foul.

Spilled to the floor, he flexes with both arms — while seated — bares his teeth and roars as he looks up at the Croatian giant, who stands 7-foot-1.

The stanza ends 36-27 — almost 39-27 — when Curry glances a better than half-court heave off the rim as the buzzer sounds and the backboard glows red.

The second quarter and the second unit is a different story.

Suddenly, the Warriors are up 38-37 just over three minutes in. The playoff vibe has faded into a decidedly regular-season-y feel.

Thompson, the only starter to anchor the back-up unit, throws a towel to the ground in disgust as he takes a seat on the bench. He flings another towel all the way to the baseline.

But the Warriors recover and close. A 29-14 run makes it 69-56 when the teams trickle into their respective locker rooms. It’s a mini-implosion for the Clips, who earn a pair of technicals in the final 37 seconds — the latter assessed to Rivers as he makes his way off the court.

By the time Bob Myers makes it back to his perch, some 15 rows up and directly behind the Warriors bench, the lead has shrunk to seven.

Curry promptly splashes a 28-footer and then slinks along the far sideline, a celebratory stomp.

His ankle scare in Memphis, on the penultimate night of the regular season, feels like a distant memory.

“He’s a great player,” Rivers says. “I was telling my coaches, I still think Steph Curry is one of the most underrated players in the NBA. I don’t even know how that happens, but he is. He’s taken for granted.”

Curry ends the quarter on the bench.

He’s jumping up and down, spinning his “Strength in Numbers” towel above his head like a helicopter.

“All I know, when he’s on the floor, he is a handful and he makes them better in so many ways,” Rivers adds.

E-40 is blaring through the stadium speakers during a timeout. The promotions crew, who blast t-shirts into the crowd with hand-held air cannons, are riding around the court on scooters. But it’s not over — not until Curry returns to ice it

The in-arena camera catches him on the bench amid a timeout. A minute earlier, Curry connected on his eighth 3-pointer of the night. In the process, he passed Ray Allen for most 3-point makes in playoff history.

“He’s been playing his best for about five years — as far as I can see,” Kerr says.

Patrick Beverley is chirping at Durant. A lot.

“I’ve been playing against Pat Bev since he was at Arkansas,” Durant says. “So, I kind of know what he brings. He’s a Chicago kid and he grew up and was raised in the Chicago area, so those dudes play with a different kind of grit. So, I can appreciate that about him.”

“And Kevin can talk too…”

Durant guards Beverley so fiercely that the Clipper guard ends up falling face first into the scorer’s table. He pops up and immediately starts talking.

KD vs. Beverley: a storyDoc: "It was talk. Pat's gonna talk and that's legal... but it was much ado about nothing." pic.twitter.com/EYKZYiVfdw

Referee Ed Malloy flies in to separate the pair and they’re both gone.

“That’s two technicals,” Kerr says. “You get seven technicals. Your seventh one is a suspension in the playoffs — whether you play four playoff games or 24. Seven is the magic number.”

“That’s a bad trade for us. The Clippers have made a lot of good plays this year and that was maybe their best.”

After the game, Durant, who’s wearing that black White Sox hat that has become the staple of his postgame wardrobe, is unbothered. He says he was just having “fun.” He’s not concerned about the double tech.

“Nah, I can control myself.”